Give me a sign: Canned Pineapple Co. leaves a mark on downtown SLO signage

Read between the signs

If you've been to downtown San Luis Obispo, you've seen it.

Over on Broad Street, tucked away on Garden Street, up Marsh Street, and all over the Creamery Marketplace are the marks of Buddy Norton and Shelby Lowe's very visible work.

As you walk into Scout Coffee Co. to get your morning cup o' Joe, mosey into Sidecar Cocktail Co. for a stiff one, or breeze inside of Level Beauty Bar for a manicure and pedicure, your eye can't help but catch the light of the gorgeous, gold leaf signage beckoning you to come inside and stay awhile.

Just a few years ago, Norton and Lowe got swept up into crafting hand-painted signs. Since then, the SLO-based boyfriend-girlfriend duo quit their day jobs, refurbished two vans into living spaces, took to the road for seven months of the year, and formed their sign painting company, Canned Pineapple Co.

"Gold leaf had kind of left downtown, so I had to convince people," Norton said. "Luckily they trusted me. I felt like a rock star when my first sign went up."

After college, Norton actually started working in a sign shop. He hated that particular job but fell in love with signs, and fell harder for the work of a local sign maker, Oceano-based Sean Beauchamp, who's known for downtown signs like Giuseppe's Cucina Rustica's and the refurbished hotel sign on Higuera between Chorro and Morro streets.

"Basically any kind of cool, fabricated sign downtown, he's made," Norton said. "I was too nervous to meet him. He was low-key my idol, and then he just showed up at the sign shop I worked at."

Under Beauchamp's tutelage, Norton learned fast and then went on to teach Lowe the art of making and painting signs. In particular, the couple is known for their work with gold leaf, which includes working with actual (and expensive) 23-carot gold.

"It's so incredibly thin," Lowe said. "If you breath wrong it will disintegrate. It's so bright and there's nothing like it. Real gold is so shiny and bright."

Gold leaf signage also has some serious staying power, according to Norton.

"It's a timeless look that lasts as long as you want it to on the window," he said. "There's no shelf life really."

The creative duo estimates that they have 20 to 30 signs up around the Central Coast alone. Their work can also be spotted at Batch, Kreuzberg Coffee Co., and Calwise Spirits Co. Their most recent colorful touches are seen all over the Creamery in downtown SLO: everything from the brightly painted floral "SLO Irresistible" mural to the classic-looking Nite Creamery and Mama's Meatball signs. 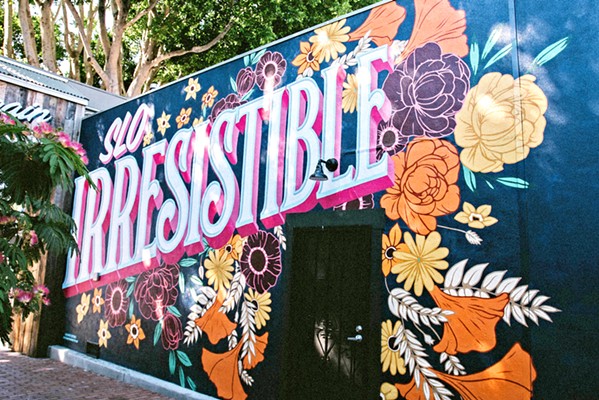 "We want more of that type of thing in SLO, so the hope is it will lead to more people doing bigger work like that," Lowe said of their new mural in the Creamery.

"You really can change a space with just paint," Norton added.

On the road, Norton and Lowe paint signs for the likes of mom-and-pop tattoo parlors and even bigger corporate companies like REI. Future dream signage jobs for the Canned Pineapple Co. team include colorful, whimsical pieces for a floral shop and candy store.

Still, when the SLOcal couple is home during the winter months, they can't help but feel a shiver of delight when they walk past one of their signs.

"It's really cool, whether people notice it or not, but you hope that it would add to the atmosphere," Norton said. "You've subtly changed the landscape. It's cool to think that we can help these businesses find their voices." Δ

Arts Writer Ryah Cooley is signing off at rcooley@newtimesslo.com.