Canyon-land: More than a peek over the Grand Canyon's South Rim

Each footstep leaves a boot print squished into the rusty-hued mud coalescing in the middle of the wide, well-worn Bright Angel Trail. It slurps at the bottoms of my hiking boots, daring me to look at what I’ve descended into rather than straight at the ground.

Space slips straight down into a cavern inches to my right and shoots up into the clouds inches to my left. It’s dizzying, and all I can anchor myself to is the mud at my feet. I am a tiny being and the canyon is indeed grand.

A few hundred feet above me, this dirt track was firm with a layer of snow/ice trickled over its top and tourists from so many far off places traipsing and giggling into selfies cloaked in a mystery that’s opened up below a layer of fog. Red and raw rock faces, boulders big and small, steep cliffs, sprinkled vegetation, and miles of path that switchbacks into the depths of the Grand Canyon.

Merry Christmas to me! It’s cold and windy with low visibility, but I’m not the only person gawking at this national park on Dec. 23, 2016. Every mile I traverse makes for fewer people coming back up—and the ones who do pass me have the pained look of having been on a stair stepper for too long juxtaposed with the euphoria of accomplishment. 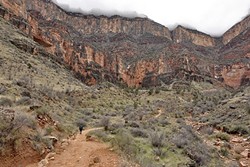 Bright Angel runs from the South Rim to the Colorado River, across it, and up to the North Rim. The trek is long, and the National Park Service warns against attempting to head to the river and back in one day, especially in the summer. I didn’t start hiking until 11 a.m., so I wasn’t going to try it.

Instead, I made it to Indian Gardens—4.5 miles and 3,000 feet down—which is a pretty turnaround point, an oasis of sorts above a dry creek bed with a campground, bathrooms, water, and a small herd of mule deer. I follow one down the trail for a bit before giving it space to disappear.

I turn around and get hit over the head with where I need to go. Rocks sheered into perfect vertical lines disappear into the fog above; spires stare ghostlike through the clouds from the rim where I came from, 6,850 feet elevation. And I need to get from my measly 3,800 feet of elevation up to there before dark, which is three hours away.

Editor Camillia Lanham did make it, but was sore for a week at clanham@newtimesslo.com.