Citing a glaring need for more drug and alcohol detoxification services in San Luis Obispo County, on Jan. 23 the county Board of Supervisors signed off on conceptual plans to build and operate a new detox treatment center in SLO. 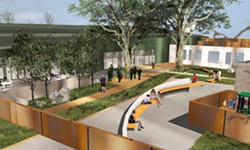 Proposed on the property that will house the Community Action Partnership of SLO's (CAPSLO) new homeless center in the city of SLO, "40 Prado," the 8- to 10-bed facility could eventually provide medical detox services and residential treatment for low-income residents suffering from substance abuse disorders.

Health officials told county supervisors in a board meeting presentation that detox services are "entirely lacking" in the county and service providers "haven't had anywhere to send people." A new contract with the state Department of Health Care Services inked last month also requires that the county provide more residential detox services within the next three years, either within the county or elsewhere.

"Without a residential treatment program available locally for Medi-Cal beneficiaries, the Health Agency will be required to contract with out of county providers for this level of care," a county staff report stated.

Only five detox beds are currently available to serve low-income Medi-Cal patients—at Bryan's House in Paso Robles, which is for perinatal women only—despite the fact that an estimated 22,300 to 27,100 local adults suffer from substance abuse disorders.

"This has been long overdue at this point," said 5th District Supervisor Debbie Arnold, before the supervisors unanimously voted to direct staff to continue working with CAPSLO on the project.

According to county Behavioral Health Administrator Anne Robin, of the 2,269 adults who received substance abuse services from the county in 2015, only 2 percent needed detoxification, which is why a 8- to 10-bed facility was proposed. Once admitted to the detox center, patients would spend six to eight days in medical withdrawal, followed by up to 30 days in a residential treatment program.

While the 40 Prado homeless center plans to open this summer, the detox facility may take two years to complete, according to county estimates.

Capital costs for the 2,880 square-foot facility are estimated at $730,000, and CAPSLO staff said private philanthropists are interested in helping fund its construction. Before proceeding, though, donors wanted assurance that the county would commit to running the facility for the long haul, which was why the item came before the Board of Supervisors, according to CAPSLO. The county plans to contract detox operations to a third-party provider.

While all five supervisors supported the project, Supervisors Bruce Gibson and Adam Hill expressed concern about the ongoing operational cost to run the center, pegged at $1.2 million per year. Operational expenses will be partially offset by Medi-Cal and Affordable Care Act (ACA) reimbursements as well as grants, but their extent is unclear.

County staff added that federal changes to the ACA could significantly change the prospects for the facility, potentially "reducing program service levels or closing the facility."

Gibson and Hill noted that county funds could be tied up with other spending needs on the horizon, like health care reforms at the county jail.

Sheriff Ian Parkinson spoke in favor of the project at the meeting, noting that residents with substance abuse issues come "in and out of jail all the time." Δ