Glen The plot is a bit more complicated than what's above. The story opens when Vers, as Carol is known in the Kree capital planet of Hala, is training to become a Kree warrior. Her problem, as her training partner and team leader Yon-Rogg (Jude Law) tells her, is she can't control her emotions when she's in battle. Vers is a bit of hot mess. Women, right? She suffers from nightmares involving another woman (Annette Bening), and she doesn't remember her past. Much of the film moves back and forth in time as Carol slowly pieces together her life before she became a Kree fighter and member of Starforce, which is at war with the Skrulls, shape-shifting aliens who can disguise themselves as anyone they come in contact with. I don't want to give too much of the inventive plot away. Part of the film's fun is that viewers are as much in the dark about Carol's past and what's happening between the Kree and the Skrulls as she is. Suffice it to say, the story heats up when Carol eventually finds herself back on Earth, where her arrival, crashing through the roof of a Blockbuster Video store and finding communication gear at a RadioShack—yes, it's definitely 1995—draws the attention of the authorities, specifically Nick Fury (Samuel L. Jackson), an agent of a fledgling covert group called S.H.I.E.L.D. Overall, it's an entertaining origin story of Captain Marvel as well as a rousing feminist saga as Carol discovers who she is and what she's capable of.

Anna Putting females at the forefront of these superhero sagas has certainly reinvigorated the genre for me, and its record-breaking first weekend at the box office shows I'm not the only one. Vers is strong willed and a mystery even to herself, and while she can't remember the circumstances that brought her to Hala, she knows she's fighting for justice. The Skrulls are terrorists, indiscriminate in their carnage. On a covert mission to rescue an undercover spy, Vers is captured by Skrulls and subjected to a memory probe that leaves her with more pieces to a puzzle that makes less and less sense. This film unfolds Carol's past bit by bit, and half the fun of the film are the reveals, so I'm going to try hard to not give too much away. The other half of the joy is watching Carol kick bad-dude butt and start to realize the true extent of her own powers and who she was before. I appreciate when these big-budget action films at least attempt a solid storyline and character arc, and I can happily say they did with Captain Marvel. While you still have to decode some sci-fi lingo, like the names of alien races and planets, it doesn't get so bogged down in detail that a non-comic book person will be overwhelmed. The nods to the '90s are pretty fun too—the soundtrack was a trip back to middle school for me. Pay phones, Blockbusters, and pagers—it's a lot of subtle throwback touches that I'm guessing a lot of parents will appreciate. 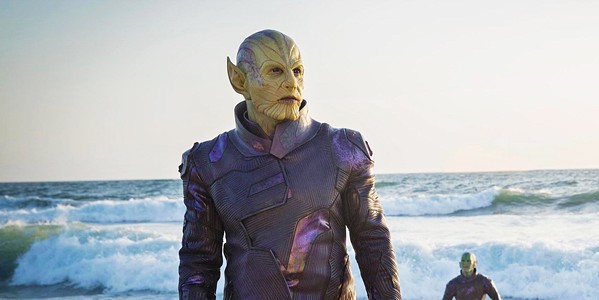 Glen I wasn't sure how Brie Larson would be as Captain Marvel, but thankfully she approaches the role with humor. Gotta love an actress named after cheese, right? Superhero movies that take themselves too seriously are usually terrible, which is why Thor: The Dark World (2013) was a bit of a dud for me while Thor: Ragnarok (2017) was a blast. Superhero stories are inherently ridiculous, and when the stories and characters acknowledge that, even with a wink, they're more fun. Vers comes off as irreverent and bordering on disrespectful of her superiors. As she learns more about her past, she begins to suspect she's been manipulated. She eventually locates her old pilot friend, Maria Rambeau (Lashana Lynch), now retired from the Air Force and living a quiet life with her daughter, Monica (Akira Akbar), who still remembers Auntie Carol from the old days. Vers makes a great role model for Monica, who also gets to see her mom get back into pilot action. Jackson as Nick Fury has a lot of fun in his role and doesn't seem phased by the strong women around him, but the film's scene-stealer is Goose, a big orange tabby. Lots of great action sequences, solid special effects, and with a classic tee-up for future sequels, Captain Marvel manages to entertain and inspire without resorting to didactic lecturing. But viewers will certainly be reminded of the old adage, "Don't judge a book by its cover."

Anna I'm in the same boat: Thor: Ragnarok was a lot of fun, while some of the Avenger films that get a bit too serious with themselves fall flat. I'm here to have fun! I like Larson as the newest addition to the team of superheroes. She's snarky and sassy—a girl after my heart. Her reunion with Maria and Monica is super sweet; the two obviously adored Carol before she went missing, and they're back together again and happy to supply Carol with the lost memories she longs for. This is definitely a lesson in "things are not always what they seem," and soon the idea of good guy vs. bad guy becomes a lot more muddled as Carol's past comes slowly into focus. Jackson as Fury is always a welcome sidekick—he's so funny as the softy underneath a tough exterior. He can't get enough of Goose, cooing like a little old cat lady at him. He's great for comedic breaks when things start to get a little too serious, and Jackson knows how to play the gruff Fury with plenty of vigor. I get it if big, loud movies aren't your thing, but this one luckily has more going for it than just big bangs and bad guys. It's a fun story and a solid addition to the Marvel universe. Δ