'Captive State' squanders its potential by glossing over its political overtones

Co-writer and director Rupert Myatt (Rise of the Planet of the Apes) helms this sci-fi thriller about an alien invasion of Earth 10 years into the hostile occupation. Under the pretense of peaceful unity, the human race is enslaved, with some humans collaborating with the alien race and others engaging in violent dissent. Set in a Chicago neighborhood, the story revolves around Officer Mulligan (John Goodman), who believes Gabriel (Ashton Sanders) might be part of a plot to overthrow the aliens. (109 min.) 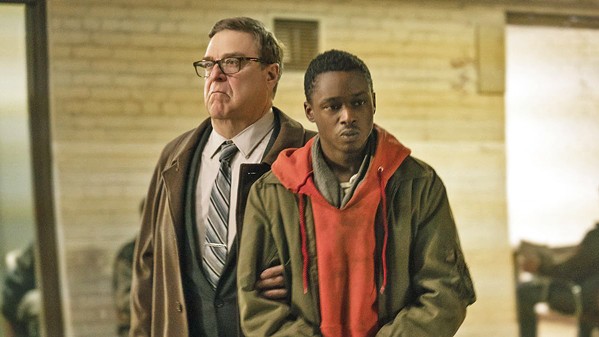 Glen Captive State strikes me as a film trying too hard to be clever, and its ending will either have you believing that Myatt and his co-writer Erica Beeney (The Battle of Shaker Heights) are truly ingenious or that their story relies on a cheap trick. I'm definitely in the latter camp. Too bad, because the general idea has merit. Before the aliens came and took over Earth, humans were at each other's throats and in a state of perpetual war, sort of like how we are today. The aliens are billing themselves as humanity's savior, bringing peace and stability, but they're really sucking our planet's natural resources dry. They manage all of this by enlisting human collaborators who help keep the populace in line by rooting out any hint of an uprising. Think World War II Nazi collaborators in occupied France ratting out the French Resistance. Officer Mulligan is clearly in the collaborator camp, and for some reason he believes Gabriel may be a threat to the alien power structure. Gabriel's father was Mulligan's old police partner, and Gabriel's older brother is the martyred freedom fighter, Rafe (Jonathan Majors), whose face is painted in murals around the Chicago neighborhood in which the story is set. For his part, Gabriel is more interested in escaping the neighborhood than fighting the aliens. He and his friend have a plan to evade checkpoints and leave the city by taking a boat across Lake Michigan. Aside from the suspicious family connection to Rafe and his secret boat, there's nothing to suggest Gabriel is connected to Phoenix, the French Resistance-style underground organization trying—mostly futilely—to undermine alien control. Even Mulligan's superiors are beginning to question his obsession with Gabriel. It's a David and Goliath story with foreshadowing that includes a drawing of the famed Trojan horse and the old adage, "Beware of Greeks bearing gifts." It certainly had potential, but don't be surprised if when it's all over it doesn't quite make sense.

Anna It all got pretty confusing, and while I wouldn't say the storyline is hard to follow, the film feels muddled at best. The classes have been pulled to opposite ends, with the rich and powerful becoming the right-hand men to the seemingly omnipotent alien overlords. The world bears a tinge of 1984's "Big Brother," and resistance is squashed the moment it's detected. The aliens themselves are mostly unseen, but the few glimpses the audience gets reveal an odd, shape-shifting giant with a porcupine's defense mechanism—it's fast, inky black, and covered in quills. It was unsettling enough but, for me, less than terrifying. There are plenty of characters to invest in—between the group involved in Phoenix, Gabriel's desperate attempts at escape, and even Mulligan and his mysterious connection to Jane Doe (Vera Farmiga)—but for me there was little incentive. It's all a bit confusing, but the action continues nevertheless with an intense and unsettling electricity, due mainly to the pulsing soundtrack that is the film's undercurrent. It had me pretty glued to the screen, but I too felt a bit cheated in the end by what came off as a cheap trick—they try to pull a switcheroo on the audience that just doesn't work.

Glen I think I would have enjoyed the film more if it had explored the immorality of collaboration, but they barely examine it aside from head collaborator Commissioner Eugene Igoe (Kevin Dunn) talking about how the only way off the "dying rock" that is Earth is to be an alien pet. "Give me freedom or give me death" is clearly not Igoe's rallying cry. What has to happen inside a person to give up fighting and go along with your enslavers? That's what seems more interesting to me. Instead, we get the various members of Phoenix on a super secret mission even they don't quite understand. In an effort to keep the aliens from discovering their plan, no one knows what's going on. They only know their individual roles. Each person is ready to sacrifice him and herself, but we don't really know how they came to this willingness. What's their motivation? Only one member of the team—Evan Hayes (Lawrence Grimm)—has a family. What are the others fighting and dying for? There was a lot of potential for drama and pathos but, aside from Gabriel and his brother Rafe, both were in short supply here. If you're a sci-fi fan and you like mystery, I can see ponying up the money to hit a matinee, but I would have felt better spending a couple of bucks on a rental. It's not a waste of time, but Captive State is surely a waste of its own potential.

Anna Sci-fi isn't my general cup of tea, and even in that genre, alien movies are usually not my first pick unless they're undeniably good, like Arrival or A Quiet Place. Captive State doesn't explore what I also think would have been the most interesting angle—why have humans decided to deny their best interest for that of the overlord aliens depleting Earth's resources? The film has some pretty evident commitment issues: Instead of exploring one interesting subplot, it jumps from to the next, then loops back and does it all again. I, like you, didn't grasp the group's individual motivations, and while the mission certainly felt urgent, its true impact is a little lost on me. It's not worth a trip to the theater, though I'm guessing a home viewing will leave even less of an impact. The film is trying to convey a message, but it's pretty handicapped in its delivery. And when the final outcome is revealed, it's unsatisfying. I just wasn't given much to care about. Δ