According to Christine Heinrichs, the book of Art Van Rhyn's cartoons is "selling briskly through local outlets," which include Cambria's Cookie Crock Market, Cambria Drug & Gift, and Coalesce Bookstore in Morro Bay ($12.95 plus tax). You can also order Capturing Cambria: One Artist, One Town, A Partnership in Paradise through Heinrichs. Her email is christine.heinrichs@gmail.com.

For almost 30 years, Renaissance man Arthur Van Rhyn aimed his acerbic wit at all things Cambria, generating a weekly cartoon for The Cambrian weekly newspaper. Now 150 of those cartoons have been compiled into a book, Capturing Cambria: One Artist, One Town, A Partnership in Paradise.

Van Rhyn retired from cartooning in 2020 at the age of 90, but Cambrian columnist Christine Heinrichs took on the job of collecting and preserving the more than 1,100 comics, which were snapped up by the Cambria Historical Society for its permanent collection. Heinrichs also curated the selections for the book and wrote the accompanying text, which gives context to the various single-panel cartoons.

"His cartoons were eagerly anticipated by locals for their skewering of local misadventures and human foibles," Heinrichs explained. "Cambria has plenty of material! He's over 90 years old now, and when I heard he had no future for the cartoons, I stepped in. I spent about two years on this. I organized the cartoons—put each one in a plastic sleeve and organized them in binders—and wrote the text. Those binders take up about 6 feet of shelf space available for future collections. The cartoons span national as well as local issues, so future collections could be organized around other subjects."

During a phone call with Van Rhyn, an important issue was settled once and for all. Is it CAM-bria or CAME-bria?

He built and designed his own house and studio, built and designed an airplane; he's a painter, sculptor, and civil engineer; and he's created more 1,100 astute political cartoons. Mr. Van Rhyn, please tell us something you're bad at.

"Oh, I'm bad at so many things. Thankfully, I'm blessed with the ability to laugh at myself," he said.

Have his political cartoons ever brought him grief from his fellow Cambrians?

"Oh, a few times, yeah," Van Rhyn said. "You can't poke fun at somebody without them getting back at you. One or two got a little virulent. After one particularly nasty one, I followed up with a blank panel, under which was written, 'In which the cartoonist, in his never-ending search for humor in the human condition, achieves a work that does not offend anyone on the basis of race, religion, ethics, politics, morals, or individual rights.'" 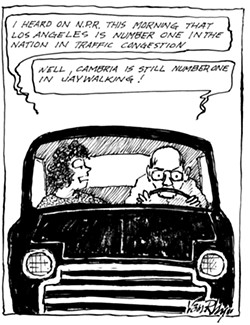 Is his gallery still open and is he still making art?

"I haven't done a damn thing in a year because of this pandemic, but I'm leaning back in that direction," Van Rhyn said. "We've all got our shots, or many of us have, and my gallery is only open on the weekends. My hours are 11 a.m. till boredom."

At this point in his life, Van Rhyn could live anywhere. What keeps him in Cambria?

"Because it's Cambria! I'm here on the beach with the best view in world," he said. "The weather is exactly what I want: It's one thing in the morning and something else in the afternoon." Δ