Car-washing culture goes down the drain 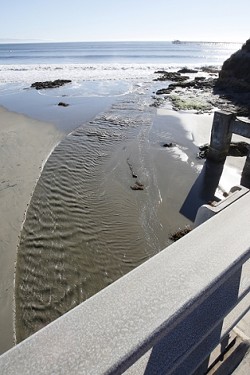 # supervisors aims to change the way locals do things around the home, like using leafblowers, taking care of the lawn and, yes, washing the car.

The law, due for final approval Jan. 15, would make it illegal to put anything except pure rain water into gutters, storm drains, and creeks in the urban unincorporated areas of San Luis Obispo, Oceano, Nipomo, Los Osos, Cambria, Templeton, Santa Margarita, and Garden Farms--essentially anywhere the county has a storm drain system in place.

In practice, it would make it technically illegal to suds up a car in a driveway and let the soap go down the drain.

The maximum penalty for violations is a $1,000 fine or six months in jail--or both--plus compensatory damages for loss of fish or wildlife. County officials also would have the discretion of prosecuting any violation as an infraction with a $100 fine.

Most people wrongly believe that any car-washing detergent or trash they hose or blow into the gutter is piped away for treatment, according to Mark Hutchinson, the county's environmental programs manager.

But the fact is that whatever gets into local gutters isn't treated. Instead, it ends up as urban runoff, polluting creeks and beaches, he explained in an interview.

"Especially in coastal communities, in the first rain, all that trash is on the beach," Hutchinson said.

The new ordinance is part of the county's storm water management plan, which is newly required under the latest evolution of the decades-old federal Clean Water Act. Urban runoff--including car-washing detergent--is considered to be the leading cause of water pollution in SLO County, adding "sediments, pathogens, nutrients, petroleum hydrocarbons, heavy metals, floatables, pesticides, herbicides, and trash" to local waterways, according to the plan.

Preventing storm water pollution is "a duty" shared by the government and "each and every resident of San Luis Obispo County," it states.

For years, such requirements have been in place in large urban areas. Now the rules are filtering down to smaller cities and towns.

As part of the national effort, each city in the county is also required to adopt its own storm water management plan and accompanying ordinances. Cal Poly, CalTrans, and community services districts in Los Osos, Oceano, Cambria, and Templeton also fall under the requirement.

In making a motion to approve the new ordinance, County Supervisor Bruce Gibson said, "There's no doubt--this ordinance does impose a significant new burden on all of us to change the way we operate. It's a result of our desire to produce clean water."

The new ordinance doesn't apply to agricultural operations, fire flows, or permitted discharges. Enforcement--triggered by a complaint hotline--would be carried out by county health inspectors and code enforcement staff, with law enforcement officers called in to issue citations or arrests.

If people do want to legally wash a car at home, Hutchinson said, they can park it on the lawn, use a bucket, and make sure that any wash water is channeled into vegetated areas rather than into the gutter.

If a person sweeps or leaf-blows their driveway or sidewalk, they're supposed to collect the resulting debris and put it in the garbage. Hutchinson also advised people to minimize their use of fertilizers and pesticides, and make sure no irrigation water runs off their property.

"The most important part of the ordinance is public education and public participation," Hutchinson told the Board of Supervisors.

He's given more than a dozen presentations about the county's storm water management plan around the county, along with the slogan, "You are the solution to storm water pollution." The response has been overwhelmingly positive, he said.

Local Home Builders Association spokesman Jerry Bunin, however, told county supervisors that he believes the ordinance "goes overboard," adding, "You can kill a fly with a sledge hammer, but it doesn't make it a good use of your energy."

This ordinance--aimed at preventing what the plan calls "illicit discharges"--is just the first of several upcoming new laws to clean up local waterways.

A pet waste ordinance is in the works, as are regulations to control storm water on construction projects of more than one acre.

There's also a new emphasis on retaining storm water onsite rather than piping it to waterways. Known as "low impact development," it includes techniques such as using permeable paving and directing rain water to planted areas and infiltration basins on site.

The county's storm water pollution prevention coordinator, Jill Falcone, has been going to schools around the county with an educational program. The local clean water mascot, Sammy Steelhead, has been a part of the campaign.

One focus is reducing the amount of plastic that ends up in storm water and is carried into the ocean. The plan calls for promoting cloth grocery bags rather than plastic bags, but stops short of the plastic-bag ban recently imposed by San Francisco to clean up its storm water.

County officials worked hard to come up with a local storm water management plan that meets with the approval of the Regional Water Quality Control Board and environmental groups. The current version--approved by the water board in March--is the "third or fourth" revision, Hutchinson said.

The plan calls for cleaning up urban runoff "to the maximum extent practicable," an "ever-evolving, flexible concept" that allows revisions.

"If we find that this ordinance becomes a way for neighbors to complain about neighbors more than helping water quality, we can change it," he noted.

"As the public learns more, our water quality will get better."