Carb-gasm, with a twist: New House of Bagel pretzels to get a dunk of Oktoberfest love this Oct. 1

Not only is this step the crucial factor behind creating an irresistible hard shell and chewy interior, it’s also the birthplace of “that fresh bagel smell,” that subtle salty, slightly tangy scent that intoxicates morning visitors of this cozy strip-mall hangout.

Prowse tells me that this scent is the true test of any New York-style bagel deli worth its salt.

“The Dutch figured out that if you bathed your bread in a lye solution, it would get a harder, darker crust, but you wouldn’t have to bake it as long, keeping the center soft,” Prowse says. “It took me about a year to develop the pretzel process, and I use some of the very same elements we use to make our bagels.”

The bagel-to-pretzel idea came earlier this year as a way to offer more variety to customers without raising cost (you can soon get your favorite bagel flavors like jalapeño cheese or cinnamon raisin as soft pretzels, and if that doesn’t give you instant munchies, I don’t know what will).

Lately, however, Prowse has been laser focused on creating the perfect plain pretzel. I watch as he gleefully takes the pretzels for a spin in his trusty industrial bagel oven, then tops the mounds with fat specks of salt.

Made fresh, this pretzel is the epitome of a carb-gasm in your mouth. Maybe that’s why the epic twists are on everyone’s lips.

“It was word of mouth that brought Madonna Inn’s Oktoberfest to us,” Prowse says, motioning to his trusty pretzel-twister, Molly Bueno. “We’ve got our work cut out for us for that one. We’ll be making between three to five hundred pretzels that day. They’ve gotta be fresh.” 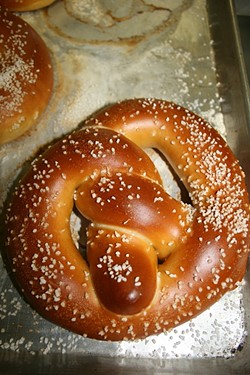 It’s a marvel to watch Bueno hand-twist the dough into House of Bagel’s signature pretzel shape (one “leg” of the pretzel is tucked out to signify authenticity). She said it took a while to get the hang of making the twists and pretzels, but now it’s second nature. That’s a good thing, considering the fact that Oktoberfest is just around the corner.

The celebration of Firestone Walker beer and German music returns to the Madonna Inn Expo Center on Saturday, Oct. 1—and for the first time, guys in lederhosen and gals in dirndl dresses will be able to swipe a fluffy, locally made soft pretzel through traditional grainy mustard.

“It’s about as authentic as I can make ’em,” Prowse says.

Until then, the breakfast stop will continue doing what it does best: churning out fresh bagels, day after day. Workers sometimes bake through the night to cook thousands of the bready morsels to be supplied to local restaurants.

As Prowse likes to say, “If you’ve had a really good bagel at a local coffee shop or restaurant, it’s probably my bagel.”

Of course, the rounds of dough also go toward fulfilling made-to-order breakfast items at the SLO storefront. Prowse says there are literally more than a million possibilities when you consider the 13 bagel varieties can be topped with a range of house-made schmears, eggs, meats, veggies, and lox. All are proudly served without preservatives or artificial colors with the exception of one, the infamous egg bagel (Prowse says diehard egg bagel fans crave that bright yellow hue). The rest, however, are sans stabilizers or food dyes, made with high quality dough, optimum water, and consistent care. The sun-dried tomato flavor owes its red hue to a splash of beet juice.

“People stand at the register and say, ‘Can I have ... ?’ and I say, ‘Yes,’ automatically,” Prowse says of his expansive menu. “A young kid came in the other day, about 8 years old, and asked for a strawberry bagel, half with plain cream cheese, the other half with honey walnut; with tomato and cucumbers on top and lemon pepper on the side.” 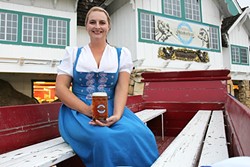 That may not be an appetizing combination to most, but that’s really not the point.

When the baker and his partners opened their first location in Paso Robles in 2005, the idea was simple: create a family friendly deli where people could feel relaxed and wield control of their breakfast destinies.

That location recently closed its doors, but the SLO shop—which recently celebrated its 10th anniversary—is still busy as ever. People annoyed by long lines should be thrilled to know you can now order via your smartphone. Want a dozen bagels to go? There’s an express line for that.

“When we had both locations, we could easily make 1,500 to 1,800 bagels on a Friday night,” Prowse says. “And that’s made the old-fashioned way. We’ve always cared about quality.”

Prices may have gone up for good flour, but Prowse and his team have stuck to their guns. Kinda makes you wonder how the guy got into the bagel business, right? Well, it turns out it was all his wife—Sharon Michelucci’s—idea. See, he wanted to do pizzas. She and business partner Bill Reeves had the crazy idea of doing bagels. Turns out, the demand for freshly baked bagels is here to stay, carb-shamers be damned.

There is another way to look at this story, too. Some might say Prowse was born to bake.

Before sending me off with a box filled with fresh plain, cheese, and cinnamon raisin pretzels, Prowse told me a personal story that still makes him laugh, to this day.

“The summer of my freshman year in college at the University of North Dakota, I worked for Sunbeam, making Wonder Bread,” he says. You know Wonder Bread—that spongy bread-like product that was the staple of every average suburban kid’s diet?

“I worked the night shift with a bunch of older guys,” Prowse continues. “I was just dying. I’d tell my dad how much hard work it was. I told him I’d never, ever work as a baker again.”

To look at Prowse now, he’s a baker through and through. He’s got tough fingers from touching steaming hot bagels. He knows the difference between subpar and high-quality flour.

You could say he’s pretty happy.

“Now that I’m that age of those old guys, I’m making bread; I’m making pretzels,” Prowse says. “A couple of master’s degrees later, and I’m back to where I started.”

Hayley Thomas is still trying to find the moral to this story. She can be reached at hthomas@newtimesslo.com.