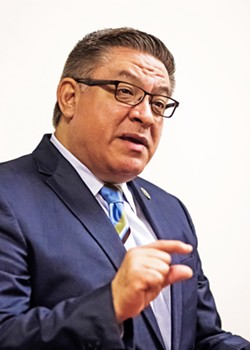 A joint statement released on Nov. 22 said that Carbajal is the fourth Congressional Hispanic Caucus member to put his weight behind her. The announcement also mentions Carbajal's career in the Marine Corps and some of the ways in which he's championed service members and veterans, including $1 million that he secured for the Veterans Treatment Court of Santa Barbara County.

Michael Latner, a professor of political science at Cal Poly, said support from a veteran and Hispanic Caucus member are exactly the kinds of things Harris could wrap into a sound bite at a time when her campaign may be foundering.

"The polling suggests that she still has her work cut out for her in California, if she's going to leverage support in her home state," Latner said.

Carbajal is in his second term in California's 24th Congressional District and sits on several House committees. Among them is a seat on the House Armed Services Committee where he has offered amendments to the National Defense Authorization Act, a bill that establishes annual defense spending.

Carbajal is not considered a fixture of the party's progressive wing, where Latner said Harris won't win wide support. Instead, Carbajal represents another centrist on her list of supporters. And though progressives have fueled campaigns like those of Bernie Sanders and Elizabeth Warren, centrists still hold the most coveted party postings, Latner said. Former Vice President Joe Biden leads the race with (depending on the poll) 23 to 31 percent of the vote.

"[Harris] stands out as a progressive in terms of reform, but she still, looking at the candidates overall, she's clearly more in the moderate lane of candidates in terms of who she's competing with," Latner said.

Harris is trailing in five major polls, including ones produced by NBC/Wall Street Journal and Fox News. Polling at 5 percent puts her behind South Bend, Indiana, Mayor Pete Buttigieg; Biden; Warren; and Sanders in the race for the Democratic presidential nomination.

Latner said bolstering her support in the Hispanic Caucus may help her secure a demographic that's still up for grabs.

"I think part of the reason she has been struggling is she hasn't been able to break away Biden's support from the African-American community," he said.

"We're incredibly excited about Congressman Carbajal's endorsement. Throughout his career, the congressman has been on the front lines fighting for immigration reform, veterans' health and safety, farmworkers' rights, and environmental justice. His leadership on these issues has been invaluable, and we look forward to working with him to share why Sen. Harris is the best candidate to fight for justice and safeguard our communities," Humes wrote.

In the Nov. 22 announcement, Carbajal said he knows the junior senator will be dedicated to service members and veterans.

"From her bold plan to expand health care and housing assistance for veterans to her leadership on immigration issues, Kamala is acutely aware of the work necessary to build an America truly reflective of our values," he said. "I have seen, up close, her work for the people of California, I have worked with her often to provide for our state, and America saw yet again on the debate stage that Kamala is the best candidate to take on Donald Trump. I know she will bring her same tenacity to fight for all Americans."

Carbajal has his own impending election on the horizon where he's facing longtime Central Coast radio personality Andy Caldwell.

Latner said it makes sense that Carbajal would pick the home state's candidate, a safe choice with his own re-election on the horizon.

So far, Carbajal has a strong start in his campaign. As of a Sept. 30 campaign finance filing deadline, the former Santa Barbara County supervisor has amassed $983,220 for his re-election campaign—compared to Caldwell's $67,303.