As the nation waited to hear the Jan. 8 televised address from President Donald Trump on the issue of immigration, Central Coast Congressman Salud Carbajal (D-Santa Barbara) pushed back against the administration's rhetoric, accusing the president of creating a crisis in order to make good on his campaign promise to build a wall along the U.S.'s southern border. 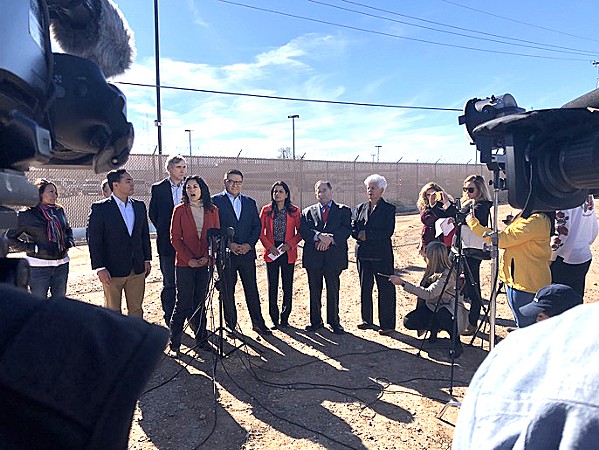 "The president's actions have done everything to create a self-imposed crisis, in essence a fake crisis," Carbajal told New Times. "He's doing everything he can to fabricate this."

Carbajal made the comments hours before the president's televised address, and one day after Carbajal and a group of other Democratic lawmakers returned from touring immigration detention facilities in New Mexico. The delegation's visit came in the wake of revelations that two children detained while seeking asylum in the U.S. died in U.S. Customs and Border Patrol custody. Carbajal characterized the operations he saw at the facilities as "haphazard," stating that the facilities' infrastructure was inadequate and lacked food, showers, water, and until very recently, medical services.

"Once, the U.S. was known as having a gold standard when it came to how we treated immigrants but now we've lost that moral high ground," said Carbajal, who immigrated to the U.S. as a child with his parents.

The Trump administration spent the last several weeks attempting to make its case that there is a crisis of illegal immigration on the southern border, and sell the public on his campaign promise to erect a wall along the border. The wall has become a major sticking point for Trump and his administration in connection with the ongoing federal government shutdown. In his Jan. 8 televised speech Trump reiterated claims that there was a growing security and humanitarian crisis at the border, and said a physical barrier was "absolutely critical."

But Carbajal noted that unauthorized border crossings have declined by 80 percent since 2000, and said that border patrol agents he spoke with on his recent visit weren't calling for a wall.

"They told me what they needed was more boots on the ground and technology, not a wall," Carbajal said.

Carbajal characterized the president's repeated claims of a crisis at the border as evidence of Trump's lack of knowledge about the issue and willingness to mislead to the American people in order to drum up support for his border wall.

"All of this is to try and sell his political campaign promise of the wall," he said. "He fabricated this crisis to sell the American people on the ineffective waste of taxpayer dollars that is his wall." Δ