Slideshow: Get down with election night in SLO County.

As the primary election results rolled in during the late-night hours of June 7, Katcho Achadjian gathered with his family, staff, and inner circle of supporters, enjoying the balmy evening on the backyard patio of a private residence on the outskirts of Arroyo Grande.

Achadjian—one of the frontrunners in the race for the open 24th Congressional district seat—was relaxed. He didn’t seem too concerned with keeping up to date on the results, which were being shown inside. His daughter and campaign manager, on the other hand, bounced around the crowd, keeping him on track and making sure that both their guests and the television news crews each got their turn.

At one point, he celebrated his birthday, which was June 2—too close to the primary to worry about it then—with a modestly frosted chocolate cake. His closest opponent in the field, the other Republican frontrunner in the race, Justin Fareed, also celebrated a birthday recently, turning 28.

The two were among a nine-member candidate pool, which included Democratic frontrunners Salud Carbajal and Helene Schneider, as well as Democrats Bill Ostrander and Benjamin Lucas, perennial Republican candidate Matt Kokkonen, and Steve Isakson and John Uebersax—who both decline to state a party preference. 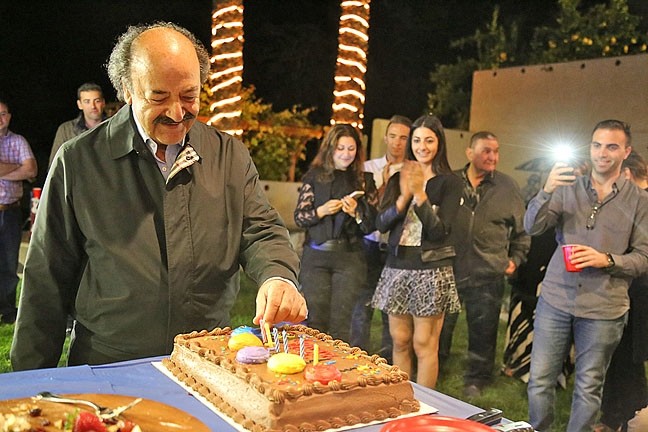 The candidates were battling to advance past the jungle primary, which per California’s voting laws lets the top two vote-getters advance, regardless of party.

By the end of the night, Cabajal had all but secured his place in the general election. His campaign declared victory before midnight struck.

As the preliminary results kept coming, they reflected the tenor of the whole primary—with the Democrats and their money firmly behind Carbajal, it was a showdown between Achadjian and Fareed for the Republican vote and for second place in the jungle. They were fighting for survival.

Achadjian, who will term out of his seat representing California’s 35th Assembly District at the end of this year, wasn’t surprised that the race’s two leading Republicans were locked in such a tight contest.

“We expected that to be the case,” he said. “With my full-time job as Assemblyman, it was tough to get to everyone, especially the far 40 percent,” he said, referring to southern Santa Barbara County and the piece of Ventura County in the district.

But districtwide, the race seemed to be fought and won in Santa Barbara County, Fareed’s home base. Preliminary results show, Carbajal with 47,618 of the votes in the district or 32.7 percent; Fareed brought in 29,902 votes or 20.5 percent; Achadjian earned 27,545 votes or 18.9 percent.

Still, campaign manager Nyri Achadjian, told New Times that they’re not throwing in the towel yet, because there are still thousands of votes left to count.

Fareed, who was joined by his supporters at the Endless Summer Cafe and Bar in Santa Barbara, felt confident, however. A former UCLA running back, he compared election night to the first quarter of a football game.

“I wasn’t supposed to have a chance in this election,” Fareed told New Times.

Presuming he maintains his lead over Achadjian, Fareed said he’ll continue to push ahead to earn the trust of voters, despite facing allegations in the news media over questionable campaign fundraising practices.

On May 5, New Times reported that Fareed received heavy financial support from Los Angeles, including several maximum donations from two families and employees of their companies, both in the health care industry. Additional reporting by the Independent and the Los Angeles Times showed that 80 percent of Fareed’s campaign cash was coming from outside the 24th District and that some of those donors who gave maximum contributions didn’t know much at all about the candidate.

Fareed dismissed the allegations as coming from “political operatives” from the Democratic Party and “big party politics.” Not having served any political office, Fareed bills himself as an anti-establishment candidate.

“It’s a last-minute attempt by political insiders in D.C. to push a narrative,” Fareed told New Times. “They’re trying to pigeonhole me, and it’s not going to happen. It’s politics as usual, unfortunately.”

Also in Santa Barbara, Carbajal’s campaign and his supporters packed the patio of Benchmark Eatery on State Street.

Occasionally, a pocket of attendees would burst into cheer at poll updates or as someone important entered into view, and by 9:30 p.m. hopeful Democratic Santa Barbara County supervisor and state Assembly candidates were dotting the crowd, chatting up constituents and devouring oversized onion rings along with room-temperature calamari.

It was 10:22 p.m. when the Democratic Party of Santa Barbara County Chair Daraka Larimore-Hall announced that Carbajal had a comfortable lead.

Carbajal made his way to the party about 10 minutes later and took the mic at the front of the patio to thank his constituents, volunteers, and opponents.

He gave a nod to opponents Schneider and Ostrander, claiming he was a better candidate thanks to their races and acknowledging their shared viewpoints.

Back in Arroyo Grande, where Achadjian waited to see if his nearly two-decade-long political career would continue into the summer or come to an abrupt halt, the seasoned politician held his head high.

He was the first candidate to become a target of negative campaigning and attack ads, drawing hits from Carbajal, the Democrats, and Political Action Committees that are aligned with the Democrats. Fareed, on the other hand, was largely left alone, indicating that Achadjian was considered the bigger threat. In response, Achadjian’s campaign tried to procede without getting into the mud.

“We’ll see if the ads had impact,” Achadjian said. “We kept it clean, that’s how we always did it.”

Should Achadjian advance to the main election, which is expected to get very expensive and very dirty, he said he’d continue to stay clean.

“I’ll leave it up to my qualifications,” he said. “If it takes dirt, we don’t need that office.”