In the unofficial election night results for the 24th District congressional, incumbent U.S. Rep. Salud Carbajal (D-Santa Barbara) had about 62 percent of the votes over challenger Andy Caldwell, who had about 38 percent. 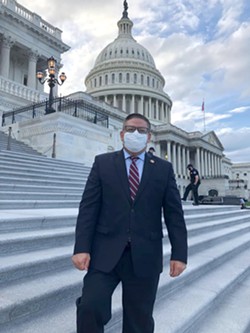 In the district, which spans all of SLO and Santa Barbara counties and a portion of Ventura County, Carbajal had more than 169,000 voters, according to preliminary results, while Caldwell held more than 104,000.

Carbajal told New Times that he spent election night he at his campaign headquarters with only a few others, maintaining social distancing and wearing masks, to await results before heading home. He said he was elated, thankful, and humbled by the Central Coast, which has chosen to again put their faith and trust in him to represent the region in Washington, D.C.

Carbajal attributes the support he's received to the work he's been able to accomplish during his term.

"I would say first and foremost, my bipartisan work to make sure that we move forward with economic relief for those that have been negatively impacted by the coronavirus pandemic. Ensuring that unemployed workers, businesses, and families who are food insecure and facing eviction feel that we are trying to provide the resources to help them stay afloat and balancing out public health with opening up the economy," Carbajal said.

His ability to focus on the issues unique to the area has resonated with the voters, he said, such as legislation to reduce the cost of prescription drugs and health care premiums; moving forward with his California Clean Coast Act, which prohibits oil drilling off the coast; and the Central Coast Heritage Protection Act that puts more than 250,000 acres into conservation for the Los Padres National Forest.

Carbajal pointed to his track record of bipartisanship as another reason voters favored him for another term.

The congressman belongs to the Problem Solvers Caucus made up of half Democrats and half Republicans committed to finding common ground and breaking the gridlock in Washington. He said he took a civility class when he got to Washington, where he committed to working to find mutual understanding.

"I hope to continue to bring us together in Washington and to model the way for the Central Coast that I am somebody who is willing to work with anyone and everyone who's willing to work with me on finding common ground to move solutions forward, be it for COVID, another economic relief package that has to be bipartisan, or comprehensive immigration reform," he said.

His future goals include, Carbajal said, to move legislation forward that bridges some of the racial tensions and disparities that continue to exist in the country.

His hopes for 2021 include continuing to work through the pandemic, continue to provide economic relief to those in need and continue to find a vaccine that can be distributed to the greater community.

"To get a sense of normalcy so that we don't have to choose between our public health and our economy. We can do it together smartly and safely. That is the first issue on the horizon and my hope for this coming year," Carbajal said.

The rest of his priority list includes affordable and accessible health care; investing in infrastructure and providing jobs while moving toward renewable energy employment sectors; addressing climate change; investing in solar and offshore wind; and advocating for Vandenburg Air Force Base to expand its commercial launch opportunities in the hopes it becomes the headquarters for Space Command.

"And again making sure we protect the civil rights of minorities, women, and the LGBTQ community," he said. Δ