Caregiver could lose power of attorney over $78 million lotto winner

A Paso Robles woman who has control over the finances of an 88-year-old lottery winner could have her power of attorney stripped away, according to a SLO County Superior Court judge. 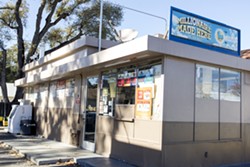 At a Dec. 15 hearing, Judge Donald Umhofer said he will hear evidence next month about whether that woman, Tiffany Borba, should continue to have financial power of attorney over Charles Hairston, a Paso Robles resident who won a $78 million lottery jackpot in 2011. In addition, Umhofer will also hear arguments about who should be appointed as a third-party conservator of Hairston's estate as part of a contentious legal battle over the elderly millionaire's fortune.

According to written declarations filed by multiple parties in the case, Hairston asked Borba, whom he met while she was working at the now defunct Scolari's Market in Paso Robles, to be his caregiver in 2012. In 2015, he signed over power of attorney to Borba, giving her control of his finances and decisions about his medical care.

According to court documents, Hairston, who is now reportedly bedridden and possibly suffering from dementia, spent some of his winnings on gifts for Borba, including the purchase of a $819,000 home and a 2016 Porsche. Since she began caring for Hairston, some members of his family and longtime friends claim that Borba has isolated Hairston from them and is taking advantage of him for financial gain. Eddie Hairston, Hairston's nephew, filed for conservatorship of his uncle in November.

Borba did not attended the hearing, but in a written declaration to the court she claimed that Eddie and others who'd alleged wrongdoing on her part were cut out of Hairston's life because he believed they were trying to take advantage of him and gain access to or control of his wealth.

At the Dec. 15 hearing, attorneys representing both Eddie and Charles Hairston raised concerns about Borba's management of that wealth, noting that she had not turned over requested accounting documentation. Brighton K. Hushing-Kline, a lawyer representing Eddie, raised concerns about payments to unlicensed individuals for caregiving services, including to Borba's son and his girlfriend.

"What I want to do is suspend these powers and turn off the spigot," Hushing-Kline said.

Umhofer said he will not only take up the issue of Borba's power of attorney at a Jan. 12 hearing but also asked the attorneys to offer suggestions for who they would like to see appointed as conservator of Hairston's estate. Hushing-Kline and Eddie's other attorney, Glen R. Lewis, floated the name of Deborah Trout as a possibility. Trout is a licensed professional fiduciary, a term used for someone brought in to manage a client's property and finances, who owns a fiduciary firm in SLO.

Herbert Stroh, a lawyer representing Hairston, suggested that Rabobank could take on the duties of a fiduciary conservator, noting that his client had selected them to manage his trust for his winnings.

"It's someone my client selected long ago to manage his trust and carry out his wishes," Stroh said.

That scenario is unlikely, as Umhofer chided Rabobank during the hearing for its management Hairston's trust.

"I'm not happy with Rabobank here," he said. "They seem to be writing checks at will."

While they wait for the January hearing, Eddie and other individuals who say they've been kept from seeing Hairston won't likely get the chance to visit or speak with him. Despite requests from Hushing-Kline and Lewis, Umhofer declined to order that Eddie, who lives in Colorado, be allowed to visit his uncle in his home, pointing to a written declaration that indicated Hairston may have requested to cut off contact with Eddie and his wife after tensions and an argument over money in 2015.

"Mr. Hairston's mental state is such that I don't want to upset him," Umhofer said.

Speaking with New Times, Hushing-Kline indicated that allowing Eddie and other close friends to see Hairston was a large part of resolving the case.

"The most important thing for us is to re-establish these relationships," he said. Δ