As he rounds the corner into the final weeks of the 2016 election, Dan Carpenter won’t be short on cash thanks to a massive donation from a conservative-leaning billionaire.

Carpenter received a $20,000 contribution Oct. 21 from B. Wayne Hughes Jr., businessmen and philanthropist with a net worth of $1.2 billion, according to estimates by Forbes. The donation marks the single largest contribution to a SLO County Board of Supervisors candidate this election.

“This man is heavily interested in my community, and I was proud to take his money,” Carpenter, a current SLO City Councilman, told New Times. 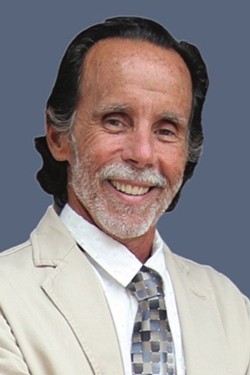 Hughes, whose father founded the Public Storage self-storage company, is no stranger to politics. In 2010, he donated money to American Crossroads, a political action committee with connections to former White House strategist Karl Rove to support Republican candidates. Hughes also sat on the board of the American Action Network, another conservative PAC. In 2014, Hughes became a vocal advocate and financial supporter of the campaign to pass Proposition 47, a ballot initiative aimed at downgrading some nonviolent and drug crimes from felonies to misdemeanors. Hughes donated more than
$1.2 million in support of the ballot measure. This year, Hughes backed Libertarian presidential candidate Gary Johnson, donating $117,000 to the third-party candidate’s campaign.

“He doesn’t tell the truth,” Hill told New Times. “He doesn’t stand for anything. … This is just deceptive.”

Unsurprisingly, Carpenter pushed back on Hill’s characterization of the donation, calling the claims “ridiculous.”

“[Hill] is making something out of nothing,” Carpenter said. “My contributions have come from local people. … [Hughes] is a local resident.”

A campaign finance report from the donation to Carpenter lists Hughes as living in Shell Beach. However, his location is listed as Malibu in finance reports for his donations to Peschong and Arnold’s campaigns.

Hughes’ website states that he “currently resides in Central California where he splits his time between the ocean and his ranch,” a reference to SkyRose Ranch, a Hughes’-owned 20,000-acre property in San Miguel.

Carpenter praised Hughes for his philanthropy, which includes founding Serving California, a nonprofit organization that focused on helping military families, crime victims, and inmates in the state. Locally, Hughes has supported the Food Bank Coalition of SLO County, CAPSLO, and the SLO Children’s Museum.

“I’m very proud to be associated with a man like that,” Carpenter said.

Hughes’ partner, Molly Cooney, told New Times that neither she nor Hughes would  comment for this article.

Since Oct. 1, Carpenter has received $33,500 in donations, of which Hughes’ donation accounts for nearly 60 percent. In the same time period, Hill raised $12,544. Carpenter took aim at Hill’s late donations, noting that many of them came from outside the district, from cities like Pasadena and Marina Del Rey, and even from other states including Texas, Connecticut, and Massachusetts. About $7,500, also around 60 percent, of the $12,544 Hill has received since Oct. 1 came from donors outside SLO County.