Beatles author Mark Brickley will present via Zoom his multimedia presentation The Beatles Road to Stardom: 1956-1964, on Wednesday, Sept. 8, via the SLO County Public Library (6:30 p.m.; free; register at slolibrary.org). The presentation focuses on the band's early years and their rise as recording artists. Featuring many rare photos and in-concert video clips, the presentation will close with a Q-and-A session.

Fans of the Fab Four, take note. You can indulge your Beatles obsession with likeminded Beatlemanics this Wednesday, Sept. 8, when Beatles über-fan, author, and expert Mark Brickley offers The Beatles Road to Stardom: 1956-1964 through the SLO County Library.

His multimedia presentation takes a deep dive into the band's formation, early personnel changes, first recordings, and commercial successes in the UK and the USA. This live virtual event is free and open to the public. You just need to register through the library website, slolibrary.org, and you'll get a Zoom invite for the 6:30 p.m. presentation, which will be followed by a Q-and-A with Brickley, author of Postcards from Liverpool: Beatles Moments & Memories.

Featuring rare photos and in-concert video clips, Brickley's presentation will highlight the group's Skiffle beginnings as the The Blackjacks and The Quarrymen, early shows as the Silver Beatles, and their Hamburg, Germany, apprenticeship, right up to the Beatles' Feb. 9, 1964, debut on the Ed Sullivan Show. 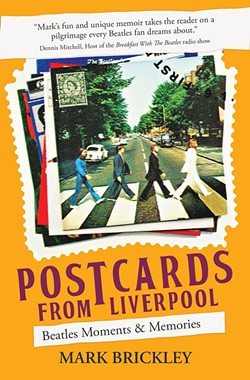 How does the presentation differ from Brickley's book?

"The upcoming Zoom presentation looks at the Beatles' early evolution, but my book traverses their legacy; from the backstory of how they recorded their first single 'Love Me Do,' the recording artists that influenced Lennon and McCartney, and impressions of Ravi Shankar and George Harrison in the chapter, 'The Sitar's Sound,'" Brickley explained in email and phone interviews.

"The book's interviews include Paul's son, James McCartney, caught backstage at Santa Barbara's Soho Club in 2013, and early Apple Records exec Jackie Lomax, who I sat down with in his Ojai bungalow," Brickley continued. "The 'Memories' section includes my 2018 meetup with Pete Best at the San Diego Beatles Fair, a travelogue of Beatles trips to London and Liverpool, insights gleaned from the 2018 White Album International Symposium held at Monmouth University, and finally a primer on how to grade and buy Beatles '60s-era vinyl records. The majority of the book's photographs are my originals."

Like a lot of Beatles fans, Brickley's interest was driven by one of the band's films.

"The Beatles 1964 movie, A Hard Day's Night—I saw it in the summer of 1964 in a small theater in Milwaukee, Wisconsin, with dozens of screaming Beatles fans around me. I was 13 years old and completely baffled, but I loved it." 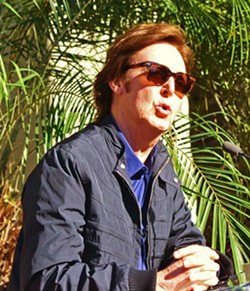 The Beatles' career lasted only 11 years. They broke up 51 years ago, and yet they endure in ways no other musical act has. Why?

"Can anyone imagine a songwriting team with Lennon, McCartney, and Harrison's abilities?" Brickley asked rhetorically. "They wrote hit after hit. It's astounding to listen to their 219-discography and the quality of most of the compositions. As performers, the Beatles' early instrumental expertise and melodic/harmonic mastery set them apart. After the band stopped touring in 1966, they suddenly had the time and freedom to create studio masterpieces. Listening to a new Beatles album became and still is an astonishing and intoxicating experience. It's their songs that endure."

It's an impossible question for a lot of fans to answer, but does Brickley have a favorite Beatle?

"The pairing of two pop songwriters/lead singers/performers like Lennon and McCartney won't likely happen again. Fifty years out and it hasn't reoccurred. It's Lennon's lead vocals and songwriting we hear on many of the Beatles' early recordings. He was the band's original leader with McCartney gradually taking over that role after 1966. So, I would pick Lennon for the rhythmic power and lyrical atmosphere he brought to the band."

What about a favorite song or album?

"Sgt. Pepper's Lonely Hearts Club Band was/is such a joyous, mind-boggling, wildly diverse album. I love the track transitions: Lennon's Music Hall styled 'Being For The Benefit of Mr. Kite!' with its swirling, circus poster lyrics to Harrison's spacious Indian raga 'Within You Without You,' then jump to 11 classical musicians accompanying McCartney's 'She's Leaving Home,' and with finality, strike the most famous pop chord that's still reverberating in 'A Day In The Life.' Sgt. Pepper is at the top of my list."

Brickley also looks at the two almost-Beatles—Stuart Sutcliffe and Pete Best. What does he think of them? Tragic figures?

"Both the book and Zoom presentation remember both musicians. Sutcliffe's decision to leave the band while in Hamburg forced McCartney to pick up the bass and changed the Beatles' destiny. His death from a brain hemorrhage was tragic because he left behind German fiancée/Beatles photographer Astrid Kichherr and never allowed Sutcliffe to pursue painting, which was his true talent. "Pete Best was forced out of the band but played on both the Decca Demos and was the first of three drummers to record 'Love Me Do.' He was crushed to be voted out, but adding Ringo Starr cemented the band's chemistry and added a unique voice to their recordings," Brickley continued. "Ringo was/is a superior drummer, and Best finally benefited from his time with the Beatles. He reportedly received several million dollars from the band's Anthology albums, which featured his playing on several tracks."

Brickley has presented The Beatles Road To Stardom for Santa Barbara County libraries and organizations before, so this should be a very polished 45 minutes followed by a Q-and-A. What sort of questions does he get?

"Oh boy, the whole gamut. There are some really sophisticated Beatles fans out there, people that know stuff I don't know. One question I often get is if any new Beatles music is being discovered? I kind of keep tuned into what's happening in Beatles world on podcasts—you'd be amazed by how many people are involved in the Beatles' orbit," he said. "One new discovery that's Beatles-related is a 1980 John Lennon home recording called 'India India' that's now available on YouTube. A lot of people downplay Lennon's musicianship, but he's quite an accomplished guitarist. His sparkling instrumental coda at the song's end is startling, challenging, and beautiful."

Brickley's music knowledge is encyclopedic, so even hard-core fans will learn something.

"I'm really excited to reach out to the SLO Library audience and Beatles fans in SLO County," Brickley added. Δ