As a deadline looms for U.S. Secretary of the Interior Ryan Zinke to submit recommendations about potential changes to the status, boundaries, and protections of 27 national monuments established or expanded since 1996, the future of the Carrizo Plain National Monument in San Luis Obispo County remains uncertain. 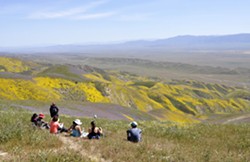 While Zinke's recommendations following the 120-day review are due to President Donald Trump by Aug. 24, Zinke recently announced his decisions on six monuments ahead of schedule. He asked that no changes be made to monuments in Idaho, Washington, Colorado, Arizona, and Montana and recommended a boundary reduction to a monument in Utah.

But all is quiet about the Carrizo Plain, the 204,000-acre local monument designated in 2001 under President Bill Clinton, as well as the five other California monuments under review—Berryessa Snow Mountain, Giant Sequoia, Mojave Trails, Sand to Snow, and San Gabriel Mountains.

That has thousands of monument supporters nervous and dreading what may be coming from Zinke. Bryant Baker, conservation director for the Los Padres ForestWatch, a nonprofit organization opposing the review, indicated to New Times that no news isn't necessarily good news.

"We're waiting. We hear things, reports shared around internally, that we pick up on," Baker said. "Boundary reduction is certainly something we're concerned about. They're looking at Carrizo to see whether or not they can change the protections so that [oil or gas] drilling could be increased."

Zinke's recent announcements triggered a response from U.S. Rep. Salud Carbajal (D-Santa Barbara), who wrote to Zinke on Aug. 14 asking to take the Carrizo Plain off the review.

"My constituents are increasingly concerned that the Carrizo Plain National Monument, a unique vestige of the Central Valley's grassland, remains open to possible changes and vulnerable to potential oil and gas development," Carbajal wrote to Zinke. "I respectfully urge you to leave these designations as they stand."

Local support for the Carrizo Plain monument has been strong, according to Baker. During a public comment period between May and July, the Department of the Interior received an estimated 15,000 public comments mentioning the Carrizo Plain, he said. In addition, ForestWatch delivered nearly 3,500 letters and postcards written by Central Coast residents to Washington D.C. Given the monument's economic benefit to the tourism industry, ForestWatch also filed letters from 130 local businesses and the SLO and Atascadero chambers of commerce.

"All were sent in support for the monument," Baker said.

But not all local leaders stand in such strong opposition to the federal review. SLO County 5th District Supervisor Debbie Arnold, whose district includes the Carrizo Plain, told New Times that citizens should welcome it. Arnold said she was asked to write a letter opposing the review and declined.

"I'm happy to have a review. Let's talk about it," Arnold said. "If changes come out and you don't like them, then get loud. But what's wrong with the review?"

Organizations and agencies throughout California have promised they will get loud if any amendments to the state monuments are pursued. Even the state Attorney General's Office wrote to the Trump Administration in June promising to challenge any such attempts in court. No president has ever sought to roll back national monument statuses under the Antiquities Act of 1906.

"This is unchartered territory," Baker said. "The way we see it is all of these national monuments have been deemed necessary for protection." Δ