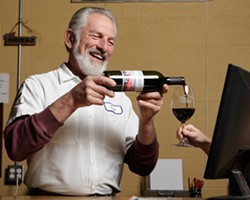 Vintner and winemaker Don Peters is raising the limit for drinking and driving. He’s the only winemaker I know who can mix wine and cars, and not get you stung with a D.U.I. Of course, cruising around is strictly limited to the information superhighway. Long known for such witty, auto-themed wines as his flagship Multi Viscosity (a Bordeaux red blend), plus Corvette Cabernet and Hot Rod Red, Peters recently provided wine lovers the thrill of wine tasting with their brethren in several states during a virtual wine tasting online.

I’ve rarely met a winemaker who doesn’t feel passionate about his or her craft but with so many new SLO County wineries competing, the ground rules have changed. Vintners have to be creative to make their brand stand apart from the rest. Peters, an expert mechanic, used his unique car theme when he started making wine professionally in 1998. Nevertheless, it’s still difficult to get locals to exit Broad Street, even when they drive past a tasting room daily. “We’ve been open 11 years now, and people still tell us, ‘We saw your signs and balloons but never bothered to stop,’” Peters explained. “And then they would see us at a charity event where they could taste the wines; that would (finally) bring them out to see us.”

The online tasting began when Peters was approached by Recipe, a food and wine marketing firm in San Luis Obispo. They asked Peters if he was interested in conducting a virtual tasting online. The group recently held its first virtual tasting with Sextant Wines in SLO on Twitter. Sextant sold three cases of wine to participants in that virtual tasting, which Recipe considered successful. Still, the marketers believed they could improve sales with a different online venue. For Cerro Caliente, they advertised the virtual tasting on their blog, titled: “The tasting is virtual. The wine is real.”

Participants were invited to pre-purchase Cerro Caliente’s 2004 Corvette Cabernet at a discounted price of $15 a bottle, normally $28. The tasting would take place throughout the day on Wednesday, Dec. 16, when participants could log on, only entering their name and e-mail address (the latter wouldn’t be published), and write their tasting comments. In addition to Recipe’s press releases, Cerro Caliente sent a notice to their members of Club Caliente. I e-mailed Recipe communications specialist Cary Conrady to obtain a bottle of Cerro Caliente Cellar’s 2004 Corvette Cabernet a week ahead of the event, and cellared it until the virtual tasting. I told her I planned to inform our readers about the outcome.

On Dec.16 at 4:26 p.m I was sixth to respond when I wrote: “This friendly, easy-drinking Cabernet Sauvignon is a special treat for every wine lover because it’s affordable for every budget at $15, as long as you mention the virtual tasting. On Cerro Caliente Cellars’ website the Corvette Cabernet Sauvignon retails at $28. A rich and ripe Cab, the 2004 is perfect for drinking now. Ripe aromas and flavors of black cherries, sweet blackberries, and currants blend nicely with subtle spice and oak notes. Although this wine could certainly age another five years, it’s ready, willing and able to satisfy you right now, alone or with your favorite steak hot off the grill. We should all raise a toast to Don Peters for his terrific motor related wines!”

I wasn’t alone in my preference for beef with this ripe but quite dry red wine. They had 28 responses, including participant Barrie Cleveland, who said he would enjoy it with sharp cheese and crusty bread, or braised beef with roasted rosemary potatoes. However, some bloggers were completely opposite to our comments, suggesting it was Port-like and better for dessert rather than red meat: Cres said: “Tastes a bit like a Port or dessert wine. Smooth, sweet, and strong with a syrupy texture, it would pair well with any type of berry cheesecake.”

Mitzi Nunez, Don Peters’ daughter, said of the event: “I thought the virtual tasting was a fantastic idea, but we only sold six bottles that day. I think that it’s because everyone is so busy with the holidays. As a marketing tool, it could be really beneficial at a different time. It’s great to see what other people thought of the wine because I think some people are intimidated by reviewing wine, and think their opinion won’t be right. But it’s personal, there really is no wrong opinion. Your opinion is the right one.”

The optimistic Peters wasn’t concerned about online sales that day; he believes people will eventually come around even if they don’t respond immediately. “We often hear from people that they had our wine with their in-laws and liked it so much they want to come visit the tasting room. We just had a guy from Michigan who was coming to California to visit relatives and said, ‘I just had to stop by.’ You’re not going to be a cult wine like Screaming Eagle over this (virtual tasting),” Peters chuckled. “But if people see stuff, like this blog, and it intrigues them, they’re going to go after it.”

As for Recipe, Conrady admitted the blog had a better turnout than Twitter because it was easier for people to understand. The blog provided easier access since non-members didn’t have to go through the hassle of becoming a member to access the virtual tasting. Conrady said their next market is Facebook, which I can understand as I’m so active on it. Conrady noted: “I enjoy Facebook more, you can say what you’re doing, add videos and pictures, and get feedback. On Twitter, you’re limited to only 140 words.”

“As all of this online marketing grows,” Peters concluded, “these people will come back and it’s going to improve customer relations for all of our local businesses.” ∆