Letterboxing will take you over the river, through the woods, and probably have you cramming your arm into a tree trunk

Not all letterboxers are alike. Some favor hiding the boxes, generally small plastic food containers with hand-carved stamps ensconced in Ziploc bags, for others to find. Others merely hunt, solving clues, puzzles, and riddles until they find their box, stashed beneath a rock or within a hollow tree trunk. Many do a little bit of both, hiding as they encounter good locations. There’s further division within the planter demographic based on preference for urban or rural spaces, and the degree of time and precision committed to carving a stamp for a particular location. Some prefer to test their peers, either with an exhaustive hike to get to the letterbox location or a string of clues difficult to decode.

Letterboxing is a simple enough hobby, requiring a stamp (preferably hand-carved) and notebook. A compass, water bottle, and gloves also tend to come in handy. Participants can go to one of two websites—Atlas Quest or Letterboxing North America—for a list of boxes hidden in their city. From there, things start to get a little pirate-y as the seeker looks for trees with interesting marks, rocks in unusual groupings (identified in the letterboxing community as SPORs: suspicious piles of rocks), and measures paces in various directions. Should the box be found—it’s rarely a certainty—the successful seeker, flushed with victory and likely some sweat, covertly stamps into the logbook in the box and makes a copy of the new stamp in their own logbook. In this manner, letterboxers keep a record of the boxes, and stamps, they have found.

Cal Poly graduate and SLO-grown Ryan Carpenter, identified by STAMP Luis owner Bob Lyon as the local Mr. Letterboxer, estimates that he has found between 1,000 and 1,500 and placed between 200 and 250 boxes. When he started in 2001, SLO didn’t have any letterboxes, and the entire state had just 30. The county alone now has more than 60. 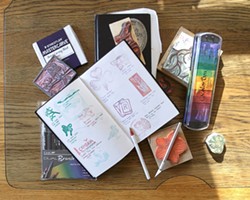 Carpenter, known to many letterboxers by the trail name Green Tortuga, first heard about the activity through a blurb in Backpacker Magazine. It’s not uncommon for hikers to take interest in the hobby, but a lot of participants also get drawn in through the craft angle, the opportunity to carve their own stamps. Armed with a speedy stamp carving block and gouging tool, and sometimes an Exacto knife, carvers can create a new stamp in as little as 10 minutes. Most that Carpenter carves require something like half an hour. Placing a box with a store-bought stamp inside is perhaps the worst sin for a letterboxer.

There’s an undeniable degree of mystery to letterboxing, which some participants work harder to maintain than others. Some elect not to identify themselves by any handle beyond their trail name. Almost all are protective of their stamps, which they prefer not to reveal to anyone who hasn’t located the letterbox that contains it. For Carpenter, privacy simply isn’t all that realistic an aim; he founded and runs Atlas Quest, making him a highly visible member of the community. But his boxes are among the most difficult to find.

“I always tell people, ‘No box was meant to last forever,’” he said, acknowledging the fact that they frequently go missing or are mistaken for a geocache and taken. “Once they’ve lived their life, then let them die and let others take their place. Also, not every letterbox is for every person.”

While Carpenter tends to favor rural hike-heavy boxes, he has flirted with more urban placements, specifically downtown San Luis Obispo. He once hollowed out a book and placed it within a downtown business, no longer in existence, of which he was quite fond. To throw the storeowner off the scent he forced seekers to locate clues to the business name in plaques downtown so that the owner couldn’t locate the letterbox with a Google search. Most boxes hidden in businesses are placed there with the owner’s knowledge, but Carpenter doesn’t feel too guilty; many letterboxers would e-mail him a list of purchases they had made at the store after locating the box and secreting it away to the bathroom to stamp logbooks.

Jamie Fend, Monotonia to her peers, has experience hiding letterboxes in local business venues as well. The enthusiastic stamp carver actually has one hidden in the Morro Bay orchid shop where she works. Fend has been letterboxing for two years, starting when a friend gave her a book about stamp carving for Christmas and the book contained a business card for Atlas Quest. She is now one of the most active planters in the county.

“I could get like three or four boxes a week. Especially Morro Bay and Los Osos and Montaña de Oro, there’s tons of boxes out there,” she said. “Then I had to start planting them.”

Armed with her designated letterboxing backpack, Fend strews boxes along the coast—mainly Morro Bay, Los Osos, and Cayucos. She admits that her clues aren’t particularly creative, her primary interest being the carving aspect of the process. But that’s fairly standard around SLO County, where most letterboxers are families or retired couples who want a gentle hike and little to no challenge. Fend prefers a degree of challenge, and once hid a pelican stamp in a location that people had to kayak to reach.

Among her first efforts was a series that featured stamps of ’80s songs placed secretively in graveyards. Though Fend has not been involved in the activity long enough to guess the average lifespan of a letterbox, her best guess is that if it lasts a year, it’s likely to enjoy a long life.

Sometimes the responsibility for a lost letterbox rests on the shoulders of purveyors of another treasure-hunt themed activity: geocachers. (For the uninitiated, geocachers use GPS coordinates to locate containers with logbooks and trinkets, hidden in public spaces.)

Working with limited financial means, Fend carves her stamps from whatever materials she happens to have at hand; she carved her first stamp from a rubber piece more traditionally placed under furniture.

“Anything I can find that’s carveable will be carved,” said the Cayucos resident. “This is like collecting works of art. I love to have that little piece of somebody.”