Casa of Hope is a nonprofit in Santa Maria that's dedicated to providing safe housing for survivors of sex trafficking, and Executive Director Ellen Torres understands the importance of this resource from personal experience. She survived sex trafficking in Santa Maria when she was a teenager. 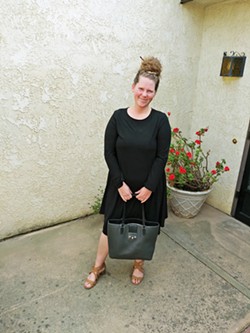 "When I was 16, my family moved here from Pennsylvania," Torres said. "I had only been here about a month and a half, and I had traffickers that were following me to and from school every day."

According to the National Human Trafficking Hotline, California is one of the largest sites of human trafficking in the nation. The Trafficking Victims Protection Act of 2000 defines sex trafficking as a commercial sex act that is "induced by force, fraud, of coercion, or in which the person induced to perform such act has not attained 18 years of age," the hotline's website states.

Casa of Hope currently operates one safe house that can house up to six people at a time, and Torres said she accepts survivors regardless of the location they're coming from. She hopes to open more shelters in the coming years.

"We'd like to have a transitional house following this one, and then maybe something similar to independent-living style after that," Torres said. "It takes a lot more than that to really instill behaviors and teach those new behaviors, and really provide opportunities to use those behaviors."

Torres said Casa of Hope is guided by the RED letter edition, which stands for revelation, education, and dedication.

"One of the things that I'm seeing that's missing from some of the other safe houses throughout California or their programs is really teaching about human trafficking and educating them," Torres said. "You'll have girls come in and they don't even know that that's what's happened to them."

For Torres, revelation is about showing survivors the coercive, forceful, and fraudulent nature of the trafficking they've experienced. The education piece means giving safe house occupants the opportunity to finish their high school diploma, work toward a GED, or attend college.

"This opportunity doesn't come around all the time, that you have a place where you can stay, you don't have to worry about anything, everything is provided for you," Torres said. "So why not take advantage of that and advance your education?"

Finally, the dedication aspect is about "committing and following through with your goals, whatever it is in life that you want to do," Torres said.

For San Luis Obispo County survivors, RISE SLO offers support and serves as a referral point to other resources.

"That type of survivor historically has accessed our shelter resource," RISE Associate Director Susan Lamont said. "[We] house them, just so that they're safe and can get their feet under them, and then assist them to look for another organization that only specializes in sex trafficking [survivors]."

All trauma is unique, Lamont said, and the trauma that sex trafficking survivors experience requires nuanced and specialized support.

"There's sometimes problems with integrating into a community living setting," Lamont said. "There's still a lot of very valid fear around strangers ... and so it's just this very, very high alert that they're on."

Lamont said she appreciates local legislators like Assemblymember Jordan Cunningham for the work he does to combat human trafficking. Cunningham, who represents SLO County and Northern Santa Barbara County, has called the issue one of his top priorities and authored multiple pieces of anti-human-trafficking legislation.

"I do think that it's a problem everywhere, but I think that this particular area is a pretty high traffic area for it," Casa of Hope Executive Director Torres said. "I want people to be educated in human trafficking so that they see the signs."

• Megan's Organic Market on South Higuera Street in San Luis Obispo is gearing up for the annual 4/20 cannabis celebration featuring deals, food, and music. Owner of the dispensary Megan Souza said the elusive Benny's Pizza will be making an appearance on April 19, and on April 20, Taqueria 805's food truck and SLO Donut Company will be serving up some special treats. On 4/20 the dispensary will hand out swag bags for the first 300 customers and will have plenty of deals on cannabis products for everyone. Δ