Be the cat's meow!

Find out more about the Feline Network of the Central Coast by visiting felinenetwork.org.

Without you even knowing it, the volunteers at the Feline Network of the Central Coast have probably saved your life! How? Female cats can produce three litters a year with an average of five kittens per litter, so in a mere two years, a pregnant female cat and her offspring can grow to 225 cats, and an unchecked feral cat colony can be a breeding ground for parasites and diseases that can be transmitted to humans through a process known as zoonosis. Lucky for you, the Feline Network traps feral cat colonies, screens them for health problems, pays for them to be spayed or neutered, and then returns them to live out their natural lives, being fed daily by volunteers.

Elaine Genasci, one of several founders of the local organization, started working with feral cat populations in 1995.

"I originally did it on my own because I discovered a bunch of cats over off of McMillan Road, off of Orcutt," Genasci explained. "There was a nice guy who did car work who was feeding them there, so I rented traps from Woods Humane Society and just started trapping, and I trapped like 20 cats, and I paid for it myself, and the guy helped me and pitched in money, and I got them all spayed and neutered. Then I was, 'Wow, there's a big need.'" 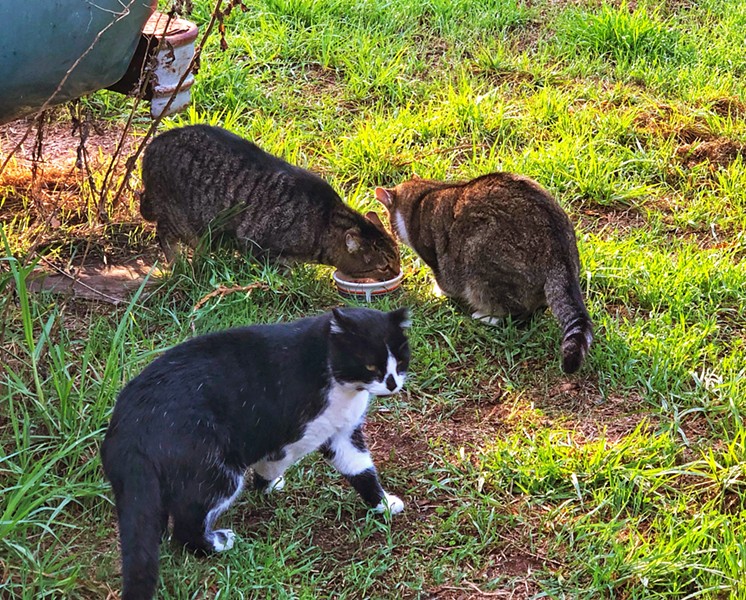 Eventually Genasci joined Christine Collie, Diane Brink, and a few other self-styled "cat ladies," and in 2002, they formed their own nonprofit.

"We started with $500 and generated money through our newsletter," Genasci said. "We have an agreement with Petco in San Luis Obispo. We're their humane organization so we do adopt-a-pets there. Today, we have between 40 to 50 volunteers, mostly who do foster homes, but also some who trap or feed the colonies. There's kind of a thrill in trapping. You get into the cat's psyche, find out what bait cats go into traps for—cat food doesn't work. I use tuna in oil; other people use mackerel, sardines, or fried chicken."

Genasci and her organization essentially help cats that would otherwise be euthanized. Feral cats aren't adoptable, but feral kittens can usually be developed into adoptable pets if they are brought into homes and socialized. If the Feline Network didn't spay, neuter, and maintain the wild cat populations, those animals would be sent to Animal Services where "they'd be kept for a certain amount of time, health-screened, fed, and eventually euthanized," Genasci explained. "That all costs the taxpayers money. This is a better solution to that. They get to live out their lives. They get fed and maintained. They're healthy, and they're not hurting anybody."

When Genasci first started working with feral cat colonies, she says Animal Services would euthanize 4,000 to 5,000 animals annually, but "about 10 years ago, they got that number down to about 400 a year. That's because we're preventing the animals from going in there and spaying and neutering everything we can get our hands on. It's nice to be able to see that success over time."

According to Genasci, the Feline Network is but one of several similar organizations working together to control feral cats.

"When you can get together and find out what works and then have your governing body, like Animal Services, who I commend tremendously, do a network with all the other humane organization in the county and get together with a plan, you see a lot of progress," Genasci said. "We take the undesirables. The cats and kittens you see in Woods Humane Society, they're tame, they're the cute ones. We take the ones that need all the work, the ones that Woods won't take. And so we put all the work into them to bring them to be adoptable cats and kittens."

The Feline Network is always looking for donations, volunteers, and families who are looking to adopt rehabilitated cats and kittens.

"If you hear anyone mention they want a cat or kitten, Feline Network! Take a rescue!" volunteer feeder Mike Davis said while he was feeding a colony of about 12 cats in Oceano.

In fact, the Feline Network is looking for volunteers like Davis in South SLO County, people willing to show up once a day and feed these wild cats. It's a service most people appreciate, as it doesn't result in unnecessary euthanasia and doesn't cost taxpayers a dime.

"Most people are just blown away by what we do because we're all volunteer," Genasci added.

In fact, the organization has no paid staff at all! That's grassroots, that's the spirit of volunteerism, and that's the cat's meow. Δ