Andrew Bees is best known as lead singer for the legendary reggae act Black Uhuru, but he’s also got a healthy solo career going, as attendees will see when he plays Mongo’s Saloon on Friday, Nov. 5with Ras Danny, Vance of Resination, Reggae Soundclash with MC Drakee of I Powersounds, and DJ Katchafiya of Majestik Sounds.

Andrew Bees was born in 1972 in the Waterhouse area of Kingston, Jamaica, and according to his bio, he “started his young musical career writing lyrics praising Jah works. He began to sing early in his life among reggae all-star performers such as Derrick ‘Duckie’ Simpson, Don Carlos, Sly Dunbar and Robbie Shakespeare, Michael Rose, and Junior Reid of Black Uhuru. His popularity began in 1986, when he sang on the well-known program ‘Colgate Cavity Fighters;’ the [transmission] appeared to be a great success and the voice of Andrew Bees was now known all over Jamaica. His career then launched as he took a part in the ‘Ghetto Bash Show’ on several occasions, in particular in 1993, where he accompanied Bunny Wailer. The following year, he performed in the ‘One Coils Festival,’ of Negril, which gave him another dimension to his career.”

In 1997, Duckie asked him to join Black Uhuru, and he’s been with them ever since. In an interesting twist of fate, because Duckie can’t get a visa, Ras Danny, who grew up in Trenchtown and was discovered by Bob Marley, has been asked to join Black Uhuru as the backing band. So Ras Danny and his band are essentially backing Andrew Bees as Black Uhuru. Pretty sweet for this SLO Town resident, who’ll be on the road with the band after the weekend’s show. As soon as Duckie gets a visa, he’ll join up, but it appears since Ras Danny signed with the agency representing Black Uhuru, he’s now an official member of the band.

There will be door prizes, drawings, gift certificates, and a raffle for a custom irie bike from the HBO show Weeds. Buy tickets at Bali Isle in SLO Town. 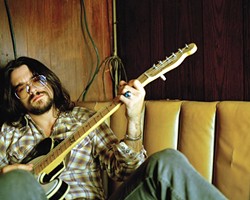 When I look at Shooter Jennings, I don’t think, “Hey, he must be Waylon’s kid.” Shooter looks like the quintessential bad boy rocker—crazy skinny, tatted-up, long-haired. In fact, he stood in for Axl Rose a couple times when the Guns N’ Roses front man couldn’t make a gig, and he fit right in.

Still, there’s some country boy in there somewhere. According to his bio, he’s got a tattoo of a gun, and “underneath that gun are the letters CBCS, for ‘country boy can survive.’”

He’s got a few albums under his belt, including the awesomely titled Put the O Back in C untry, and when he plays SLO Brew on Saturday, Nov. 6 (7:30 p.m.; 18-and-older; $20), he’ll probably play a few choice covers, including one by Hank Williams Jr. that seems to also sum up the younger Jennings’ huge shadow: “I don’t wanna be a legend/ I just wanna be a man,” he sings on “Living Proof.”

The Bob Lawrence Band will open the show. Shooter Jennings will also play a free, 5 p.m. in-store at Boo Boo Records with just him and his guitarist John Schreffler. Afterward, he’ll hang out for 15 to 20 minutes to sign CDs and meet fans. Pick up a copy of his newest album, Black Ribbons.

“In terms of my fans, I think there’s a group of them that might be looking for me to do something that is just retro or a throwback to what my dad did,” Shooter said in press materials. “And if I don’t do something like that, they’re gonna look at it as blasphemous.”

SLO Brew keeps on rolling with the return of Collie Buddz on Wednesday, Nov. 10 (8 p.m.; 18-and-older; $23 presale or $25 at the door). The Holdup opens. Buddz, who’s either Bermuda-born or from New Orleans (it’s a mystery!), creates a distinctive blend of hip-hop, soca, and reggae, and he frequently puts his voice through a special effects blender: “Some tunes I create are just to show that I could do anything I put my mind to,” he explained in his bio, “to show the versatility of my style.”

Celtic harpist and storyteller Patrick Ball will present “The Flame of Love: The Legend of Tristan and Iseult” on Friday, Nov. 5, at 8 p.m. in Painted Sky Studio ($18 at 927-8880 or 927-0500). The medieval tale of forbidden love will be delivered in similar words to the original tale and accompanied by compositions that were known and loved in the Middle Ages.

“The Central Coast reggae scene ... it just doesn’t get much better than that,” said Babylon Saints lead singer/guitarist Matt Gerovac. He likes us! He really likes us! “We just got off a cross-country tour and we haven’t found a place quite like the Central Coast. People know how to have a good time. Plus, they’re real reggae heads. I’ve learned a thing or two just by hanging out between sets.” See the Babylon Saints on Friday, Nov. 5, at Frog and Peach (10 p.m.) and Saturday, Nov. 6, at Mongo’s (9:30 p.m.). 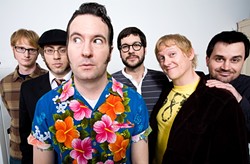 Since Reel Big Fish sold out SLO Brew last March, Numbskull Productions decided to book them into an even bigger venue, which is why the ska-punk act will land on the SLO Vets Hall stage on Saturday, Nov. 6, for an all ages, 6 p.m. show (tickets at Boo Boo’s and ticketweb.com). The group formed in 1992 and released Everything Sucks, an underground hit spread by word of mouth. Their most recent release, Fame, Fortune and Fornication, is a collection of covers. Punk-ska act Goldfinger will open the show. There’s gonna be a whole lotta skankin’ goin’ on!

Bluegrass and folk act Cuesta Ridge hits the Red Barn on Saturday, Nov. 6, at 7 p.m. ($10; bring a dish to share and come for the 6 p.m. potluck). “Their past shows at the Red Barn have always been some of the best parties of the year,” said Red Barn organizer Stuart Mason. “This five-piece, bluegrass-injected, acoustic Americana conglomerate has been together since 2004. As always, the show will include a variety of flavors, and there will be something new for the diehard Cuesta Ridge fan.”

On Saturday, Nov. 6, the Morro Bay Community Foundation will present the second annual “Morro Bay Sings” concert series in Morro Bay Veteran’s Hall (doors at 5 p.m.; show at 7; $20 presale at Ruddell’s Smokehouse in Cayucos, Coalesce Bookstore in Morro Bay, and Volumes of Pleasure bookstore in Los Osos; $30 at the door). This year’s focus is on The Beatles, and proceeds benefit the Morro Bay Community Foundation. Frankie Paredes and Tommy Nunes, who together are Mud on the Tire, will open the show, which also includes Jody Mulgrew, Shane Stoneman, The Mowtowners, Dave Ottenberg, and an all-star finale.

On Saturday, Nov. 6, The Sturdy Beggars are returning to the Fuel Dock “by overwhelming popular demand.” Jimi Macon—guitarist/producer for the likes of James Brown, Natalie Cole, and The GAP Band—blends his “original and dynamic artistry” with celebrated British bluesman David Plumb. They’ll be joined by guest players Steve “The Scotsman” Harvey on drums and Guy Erez on bass. The free show starts at 8 p.m.

On Sunday, Nov. 7, get a taste of some local jazz magic when the Famous Jazz Artist Series at the Hamlet hosts teacher/players during “Jazz Goes to College,” showcasing jazz professors of the Central Coast: pianist Paul Rinzler (Cal Poly) and saxophonist Ron McCarley (Cuesta College), plus other members of their college faculty (4 p.m.; $15 general admission or $10 for students; call 927-0567 for reservations).

I guess I’m out of the country hotness loop, because “Country’s hottest new act, The Band Perry, sold more than 52,000 albums with their self-titled debut release, The Band Perry, which was released on Oct. 12 on Republic Nashville,” said the band’s publicist. I gotta listen to more country radio, obviously, since the band’s current single, “If I Die Young,” was a top 10 radio hit that was certified gold by the RIAA in early October and continues to sell more than 40,000 downloads per week. The Band Perry is also nominated for a CMA Award for Vocal Group of the Year. Check them out at The Ranch on Sunday, Nov. 7 (doors at 5 p.m.; all ages; $15 presale or $20 at the door).

Numbskull Productions wrote to tell me about a show at Steynberg Gallery on Sunday, Nov. 7 (7 p.m.; all ages; $8 at Boo Boo’s or ticketweb.com). “Cute band alert! So cute that it’s gagalicious. Well, at least till they break up.” Oh, the humanity, Eddy Burgos! Have some damn faith. They’re Kisses. The dreamy L.A. disco duo delivers sunny-but-dance dance hits. “They’re a hipster power duo, all the rage with the cool kids,” added Eddy. Hear that? Know Kisses or risk uncoolness!

NYC native Kris Gruen is heading for Rose’s Landing on Monday, Nov. 8, to headline Steve Key’s Songwriters at Play showcase (6:30 p.m.). Gruen, son of rock photographer Bob Gruen, recently filmed a video for “Red Doors,” which is about his early years growing up around rock royalty circa the ’70s. If you’re a fan of Andrew Bird, Arcade Fire, and The Decemberists, be there!

Canadian underground rap stars Swollen Members have the best punk rock name ever, but they’re rappers. Their rap names aren’t bad either: Mad Child (Shane Bunting) and Prevail (Kiley Hendriks). Musically more abstract than their American rap counterparts, the group has become a favorite with those “in the know.” See them on Monday, Nov. 8,
during an all-ages 8 p.m. show (tickets available at Boo Boo Records). Saigon and City Real will open.

It’s been a while since Matt Sever worked as an electrician, wiring houses all day long in the blistering Texas heat, then going straight from work to nightclubs in Austin to play his songs while apologizing to the audience for his appearance, but he’s still known as Matt the Electrician to his fans. On Tuesday, Nov. 9, he’ll be at Steynberg Gallery to play Steve Key’s Songwriters at Play showcase, delivering songs from his six albums, including his newest, Animal Boy. The show starts at 6:30 and costs $5.

On Wednesday, Nov. 10, head to Spyglass Inn to see blues duo Valerie Johnson and Al B Blue when they headline Steve Key’s Songwriters at Play showcase (6:30 p.m.). Known to audiences as Val & Al, they’re currently celebrating their new CD What Kind of Blue is This? The new album features several songs by a showcase regular, Cliff Stepp.

Five is the magic number when the five siblings of the Julliard-trained piano ensemble The 5 Browns hit the Performing Arts Center on Wednesday, Nov. 10, at 7:30 p.m. The five virtuoso siblings will play five Steinways in this stunning musical event. Expect everything from “Star Wars: Suite for Five Pianos” by John Williams to “Hungarian Rhapsody No. 2 in C-Sharp Minor” by Franz Liszt; “The Planets” by Gustav Holst; “Prelude in G Minor, Op. 23, No. 5” by Sergei Rachmaninov; To Kill a Mockingbird: “Main Title” by Elmer Bernstein/Patrick Russ, “Reflections on ‘Shenandoah’” by John Novacek; “Hitchcock Movie Suite” by Bernard Hermann; “Sonata in F Minor, Op. 34” by Johannes Brahms, “Danse Macabre for Five Pianos” by Camille Saint-Saens/Greg Anderson, and more. Student and adult tickets range from $24 to $48 (Call 756-2787).

On Thursday, Nov. 11, check out San Francisco performer Jesse Brewster at The Porch at 6:30 p.m. during Steve Key’s Songwriters at Play showcase. Brewster’s sound fuses a rock/Americana style he describes as “Tom Petty and Lynyrd Skynyrd get into a bar room brawl with Neil Young and John Mayer.”

After a brief hiatus, one of SLO Town’s favorite duos, Bob & Wendy, is back with a show at the Steynberg Gallery on Thursday, Nov. 11, at 7:30 p.m. ($5). Grand Lake, fresh from opening for Brushfire Records recording artists Rogue Wave at the Great American Music Hall in San Francisco, will open the intimate, acoustic performance. Expect some mingling amongst the performers.