Catch and eat: Rockfish are on the menu straight out of the Pacific Ocean

Photo By Camillia Lanham LINE OUT JD Collier, 14, holds a line out in the waters near Avila Beach on Aug. 15.

Visit the California Department of Fish and Wildlife's website, wildlife.ca.gov, to find out more about recreational fishing regulations, where to buy a permit, bag limits, and the fish that are off-limits.

A Pacific rockfish by any other name is cod, snapper, and any one of the more than 70 species that swim about in the waters between Alaska and Baja California. 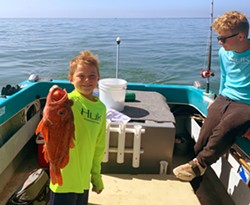 There are red ones, blue ones, black ones, and yellow ones.

Olive ones and striped ones.

Those species with giant ugly, bulging eyes and those that look less freaky.

Ones you're not allowed to catch based on federal law, and those that you can.

With most species, though, recreational fishers (who have a permit from the California Department of Fish and Wildlife) can bag up to 10 per day, combined. Anglers can fish from shore, off a pier, or from a boat, although there are slightly different rules depending on the method.

The flesh has a light, lean texture with a soft nuttiness—and although I couldn't really tell the difference in taste between say, a red or blue rockfish, there are people out there who swear they can.

Either way, there's nothing like fresh caught fish for dinner, and on Sunday, July 12, I got the opportunity to indulge thanks to the hard work of the Collier boys and an early morning. They left the house at 5 that morning with their boat in tow and headed out onto the open water from Port San Luis.

Eric, 8, caught the biggest fish of them all, and he was proud to show it off the second they pulled back into the driveway around 2:30 p.m. The fish were packed into a cooler on ice, and they got to work filleting as soon as everything was unloaded.

Those fillets went from the cutting board to the flat-top grill after receiving a bath in some tangerine olive oil from Pasolivo and a sprinkling of Tony Chachere's Creole Seasoning. A little citrus and a little heat along with some sautéed onions and serrano peppers did the trick. We wrapped the finished product up in a heated flour tortilla with fresh mango and pineapple salsa and a cilantro salad for a fresh, healthy, light Sunday dinner. 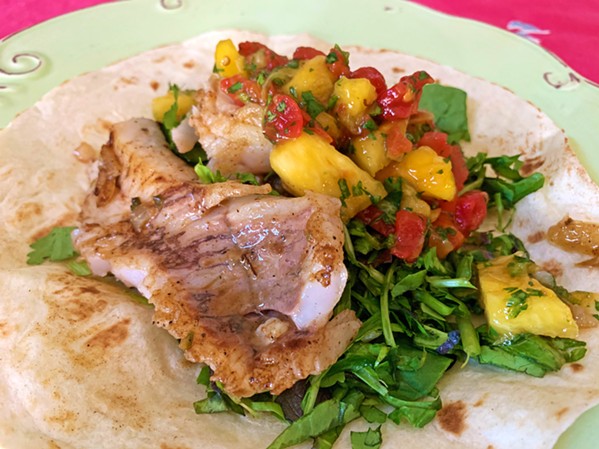 This isn't the first fresh fish dinner I've had with the Colliers, either. The weekend fishing trip is a staple in that household. We've beer-battered the fish, put it in tacos, and just had it grilled. Really, it can't be beat, and no matter how simple you make it, eating fresh-caught fish always feels special. Δ