Catch local crooner Jody Mulgrew before he moves to Nashville

Say it ain’t so, Jo! But it is so. Local crooner extraordinaire, genius songwriter, and wicked-hip fashionista Jody Mulgrew has jumped ship for Nashville! What the hell! One minute I’m taking him for granted, assuming he’ll always be knocking around the Central Coast, the next minute—poof!—I hear he’s moved to Tennessee! So I call him.

“Hey Jody, it’s Glen Starkey. I hear you’re in Nashville. What’s up with that?”

“Hey Glen. I’m just sitting down to write and record some songs with a friend. Can you call me back this afternoon?”

OK, fancypants! Now he’s too busy for me! Fast forward four hours and we’re back on the phone and he’s telling me he’s walking back from the public library where he does all his “internetting.”

“It’s a really pleasant evening right now,” says that mellifluous voice of his. “There were some thunderstorms and rain this past weekend, but now it’s warm and clear. Yeah, Nashville’s been good, but I won’t lie to you. I’m looking forward to coming back to California for the holidays.”

OK, that’s more like it! We can get another dose of the Mulgrew magic starting this Saturday, Nov. 23, when he plays the Steynberg Gallery with his Nashville neighbor and fellow singer-songwriter Nicolette Hayford (7:30 p.m.; all ages; $15).

According to Mulgrew, Hayford plays a raw, unaffected style of soul and blues, splitting her energies between the piano and a powerfully compelling voice. She’s also apparently hilarious.

“The first time I met Nicolette was in a hotel room with some mutual friends who were requesting a tune of hers, and she reluctantly played this song, ‘Busted Can of Biscuits,’ about a can of biscuits that had fallen out of the refrigerator,” recalls Jody. “But it was about so much more. I knew this girl was a special kind.”

Nicolette Hayford—born in New Hampshire but raised in Florida—now calls Nashville home. According to her bio, “her musical tastes were cultivated over years of listening to the music of her dad, Jack Hayford, and his long tail of baby boomer songwriting associates. Her music is an amalgam of  ’50s and ’60s soul and blues, ’70s singer-songwriters, and her own generation/millennial quirks and sensibilities. Her music is fun, well-crafted, it rocks and it pops.”

I listened online to her horn-driven R&B song “Do What’s Right,” and she’s got a smoking, powerful voice. Her and Jody together? This Steynberg show should kill! But back to my conversation with Jody, who’s still walking and talking on a warm evening in Nashville, explaining how he ended up out there.

“You know, I have a really good buddy who’s a songwriter out here and he was getting married a couple months ago, and I had a plane ticket and I thought, why not? All my songwriter friends have been telling me for years that I had to get out here.”

So he did it, headed to Nashville eight weeks ago, just a suitcase, a suit on his back, and his guitar. It was his first trip there, and right away he was hooked into the scene.

“Yeah, I’m pretty lucky that I met a number of songwriters out there over the years from various workshops and songwriters competitions I’ve attended, so I had quite a network already established.”

Let’s talk about Jody’s bona fides for a minute. He studied vocal jazz and classical voice, he’s toured the U.S. and Europe with award-winning vocal ensembles, and he hit our local music scene running when he formed old-time Americana act The Johnny Starlings with his friend and collaborator Yohei Shikano. The group released the album Aiming Too High and the EP Be My Baby Bright, and they even had an unreleased song called “Slow-dance” performed on A Prairie Home Companion by Jody’s friend, local chanteuse Inga Swearingen, before he and Shikano disbanded.

He went solo under his own name, and his debut solo CD Rocket Ship won Album of the Year in the 2011 New Times Music Awards. A song off that album, “I Will Not Fall in Love with You Again,” won first place in the Durango Songwriters Expo “Write With a Hit-Maker” Songwriting Contest in March of 2012. Last June, Jody received the Abe Olman Award for Excellence in Songwriting from the Songwriters Hall of Fame. 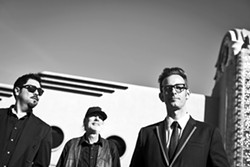 Yeah, he’s kind of a big deal for a kid from Morro Bay who’s been living in Baywood for years and teaching music in local schools. But now it’s time for Nashville.

“You know, I’m kinda just being open to what the universe provides and dangles out there in front of me,” he says philosophically. “I’ve been going through a lot of changes in my personal life. I had a great time playing with the guys in Skeleton Crew, a great time, and we really gelled. We recorded an album we’re going to put out next year in 2014. Things were really working, and I miss those guys. I’m looking forward to playing with them when I get back out there.”

Jody Mulgrew and the Skeleton Crew features Sebastian Luna and Anthony Langston, and they’ll release Let Them Talk in February—all but one of the tracks was recorded live on the second to last day of August of this year in Buellton. They also released an EP called Darkness on the Edge of Baywood. The single off the four-song collection, a cover of Bruce Springsteen’s “Dancing in the Dark,” can be streamed on his website: jodymulgrew.com.

Jody says he’ll be around the Central Coast through Christmas (his mom and sister live in Baywood), so you can also see him solo at Luna Red on Thursday, Nov. 21, Saturday, Nov. 30, and Friday, Dec. 6; and on Wednesday, Dec. 11 at the Red Carpet Winery Tasting Room in Pismo Beach and on Thursday, Dec. 12 at Cambria Pines Lodge. He’ll play with the Skeleton Crew on Friday, Nov. 29 at Costa De Oro Winery in Santa Maria. Don’t be surprised if he adds a few more dates while he’s out here. I’ll keep you posted. But after Christmas, he’s packing it all up, his instruments, his stuff, and he’s gone.

“Musicians, if we’re really making our living at it, we’re nomadic. You have to be an itinerant, going around playing where you can. You make some calls; you play some shows. Out here [in Nashville] I’ve been playing with the Rose Brothers, who I met at an open mic. They played one of my favorite songs, a Cole Porter ballad, and afterwards I went up to them and said, ‘I want to play with you guys.’ So they’re backing me up on my stuff. I sit in on their stuff, play electric guitar, and we’ll do my stuff, their stuff, and new stuff we’ve written together. There’s so many people doing music and coming into this town. It really feels at times like the possibilities are kind of endless. On any given night, there’re probably 100 spots to see high caliber music.”

And how is Nashville digging the Mulgrew sound?

“It’s been pretty good reception so far. I was playing at a place last night and afterwards a guy asked where I was from, and I told him California, and he said, ‘Yeah, I would have guessed by your hair.’ But everyone’s pretty supportive here, and I’ve gotten a great response. The first day I got here I had an opportunity to play, and I was able to be heard and to sell some CDs. Nashville’s not just about country music anymore. There’s a town south of here called Franklin, and it’s a hot, happening spot. Jack White lives down there, and the Black Keys, and all these country stars are tucked into the hills. Come into that town and you can feel the inspiration.” 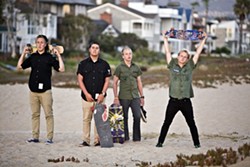 Man, to be young again and have the balls to leave everything you know and take a leap of faith, to immerse yourself in your art, to swim out into the deep part of the lake and just go for it!

“I have this quote saved on my phone—‘If you’re not living on the edge, you’re taking up too much space’—and that’s something I’ve been trying to live by.” 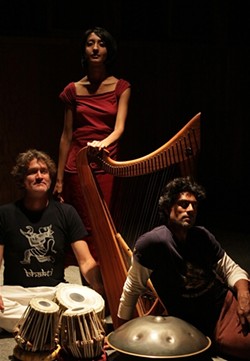 Gotta love a good cause. The members of pop punk act Emily’s Army named their band in tribute of their cousin Emily, who has cystic fibrosis. The quartet hits SLO Brew this Saturday, Nov. 23 (7 p.m.; all ages; $8 presale or $10 at the door), so prepare yourself for some hook-laden teen anthems about everything from “dealing in cautionary tales, politics, and the pressures of adolescence,” according to their bio. Billie Joe Armstrong of Green Day engineered their latest album Don’t Be a Dick, they’ve been on the Vans Warped Tour, and though they hail from the Bay Area, one member, Max Becker, now attends Cal Poly, hence the local gig. Full disclosure—he’s in my English class, but I’m not kidding when I say these kids rock it. Louder Space and Neveready open.

To celebrate the release of his new yoga video, yogi Peter Sterios will host a concert at mBody this Sunday, Nov. 24 with Masood Ali Khan & Sheela Bringi with Johnee Gange, an ensemble influenced by the mysticism of Indian music. Doors open at 6 p.m., with a 30-minute screening at 6:30, followed by a Q&A about the video, and then the music. It’s free and open to the public.