What lies ahead for Morro Bay's fishing fleet?

Lured by an e-mail description of the first local white sea bass of the season, a seafood fan snags four fresh-caught fillets for a weekend dinner party. He steps outside Tognazzini's Dockside Seafood Market to meet the fisherman who netted his dinner, Capt. Steve Mintz, and checks out DJ, the fishing vessel tied up to Morro Bay's Fishermen's Wharf. 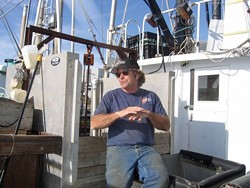 # "We make the link between the ocean, what you put in your mouth, and the fisherman who brought in the catch," explains Mark Tognazzini, a ruddy-faced long-time Morro Bay fishing captain with a ready smile. His seafood market displays the name of the fisherman and the boat next to the price of each local product.

"This halibut I'm cutting up was caught by an 84-year-old fisherman: Capt. Evans. It's not a made-up story. This is real life. And my customers love it," Tognazzini tells a visitor.

Down the road at Harada's Japanese restaurant, a diner points to a plump spot-prawn floating in a tank, trapped in local waters and brought in live by Capt. Tom Hafer on Kathryn.

Welcome to the new face of fishing in Morro Bay, where generations of fishing families are bracing for big changes in their industry. New tides are sweeping around them from all directions, bringing different regulations, different species, different partnerships, and a different and they hope sustainable future for the local fishing industry and the community's rich fishing culture.

An unusual partnership in Morro Bay caught the beacon of the national media last summer, when The Nature Conservancy handsomely paid willing local fishermen for their trawl boats and trawling permits a pilot program to reduce the impact of a fishing technique that some scientists consider destructive to ocean ecosystems. In exchange, the fishermen also agreed on a no-trawl zone of 3.8 million acres off the Central Coast.

"The fact that they sold their permits and their livelihood tells you what they thought of the future of the industry. It's a heckuva business," says Morro Bay's harbor director, Rick Algert. Fish landings on the wharf have nosedived, marine services have shut their doors, a new ice plant has faced months of delays, and employment is down, he says.

The ripples of the trawl buy-out are washing over the community too. 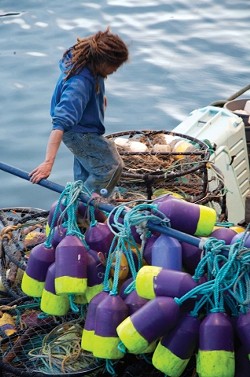 # Just this month, The Nature Conservancy handed over a $150,000 grant to the Morro Bay Commercial Fishermen's Organization to help make up for the financial impact of reduced fish tonnage coming to the wharf. The state Coastal Conservancy wrote out a $130,000 check to study future infrastructure needs and create a business and marketing plan for the new-look fishing industry. And scientists from the local, state, and federal level sat down with 40 local fishermen to ask for their help with research for the soon-to-be-established Marine Protected Areas off our coastline.

"You can't use a broad brush to paint the fishing industry. It's hundreds of multi-colored strokes," he says, comparing local fishermen to mom-and-pop small farmers.

Just down the Embarcadero, Capt. Bob Maharry basks in the sun on the deck of his boat, Mary F, wiping his hands on his well-worn jeans while he checks out her latest maintenance needs. A fellow fisherman, Capt. Craig Stolz of ZoraBelle, comes down the dock to chat.

"I've been up north since Halloween, and I reached my limit," Maharry tells his friend.

"No, time away from my wife!" he answers.

A sea lion slips past in the shimmering water, as dozens of pelicans glide overhead. The men discuss the burdensome price of diesel fuel, and what they and other local fishermen will do if the regulators don't allow a local salmon fishing season this year. To cope with the latest restrictions, Maharry has been focusing on trapping crab, while other fishermen have switched to trapping black cod from very deep waters 1,200 feet below the surface. Some are now targeting slime eels, also known as hagfish, to make ends meet.

"You want me off the water?" Maharry asks a visitor. "I ain't gonna work at Home Depot, and I'm not fat enough to be a Wal-Mart greeter. I love the ocean. It's an honest profession, it takes lots of hard work, and if you haul in a boatload of fish, you get a lot of satisfaction. Would you rather eat a pen-raised animal from Fresno?"

He adds, "It's harsh out there. It ain't the Discovery Channel. It's back-breaking. You see the old guys all walk bent over and it's not because our wallets are so heavy!"

# Maharry has been fishing local waters for more than three decades, coming up through the ranks since he started out "scrubbing puke on party boats," as he explains. His wife's grandfather and father have also been fishermen.

"The old man would always say, 'Think about the next season. Don't get greedy.' I take what I need, and I'm always thinking about the next day and the next year," he says.

Capt. Stolz, a former trawler, has also recently returned to his family in Morro Bay, after fishing for crab and shrimp in Oregon since November.

"They definitely needed to put restrictions on us trawlers. Our nets were causing damage," he acknowledges, squinting in the bright sunlight.

From what they've seen, the men believe that locally the ocean is healthy, with plenty of fish. A similar belief is expressed by Capt. Hafer on his boat nearby, down the Embarcadero. He's just come in from a research voyage with Cal Poly students, trapping and tagging cabezon to find out more about their abundance and movement.

"We tagged 101 cabezon today. The resource is very healthy. The ocean is just thriving there's thousands of whales, plenty of bait, and I saw 30 otters today with pups, little furballs on their chests," Hafer says with a smile. "The regulations have worked. Now everything is rebounding."

Hafer says he goes to "all the meetings" in an effort to reduce the size of no-fishing zones proposed for the local coastline.
"All we're asking for is a little compromise," he notes. "There aren't any big Russian factory trawlers anymore, just a few little fishing boats."

According to Harbor Director Algert, "There's no overfishing in California anymore. The fisheries regulations in California are very comprehensive. We're finally getting reports of the reality of the situation. Fish stocks are recovered and in healthy shape, with the science to prove it.

The next evening, Hafer, Maharry, and dozens of other local fishermen are scrubbed up and sitting in a conference room at the Inn at Morro Bay. One by one, they introduce themselves to visiting scientists from the California Department of Fish and Game and NOAA, the National Oceanic and Atmospheric Administration. The fishermen's collective experience working along the local coastline totals more than a thousand years.

The state and federal scientists explain how fishermen's knowledge can help improve the estimates of fish diversity and abundance that are crucial for setting catch quotas and for evaluating the success of new marine sanctuaries.

"We need you, who have knowledge of the resources," Cal Poly marine biology professor Dean Wendt tells the group. "I hope we can develop a robust program involving you and research scientists to better understand how Marine Protected Areas are working."

# Wendt earned the respect of local fishing families with his published 2006 study of 25 years of catch data from local sport-fishing party boats, which showed "little evidence of long-term declines" in most local rockfish resources.

When it's time to hear from fishermen at the meeting, many speak up to criticize the large geographic scope of fishery quotas in place even for species that don't migrate over large distances. They call for local resources to be managed for local fishermen.

That's an idea embraced by Michael Bell, the project director for The Nature Conservancy's local marine program, responsible for the trawler buy-out.

"A lot of fisheries are managed in too big of geographic units. We've identified that as a big issue," he says from his home office in Los Osos. "We'd like the management moved to a regional scale, with local fishermen involved to make better decisions on the health of the ecosystem.

"There are groundfish and flat fish species off Morro Bay in great abundance like black cod, petrale sole, and a lot of others," he continues. "The idea is to use fishing techniques like trapping, hook and line, to target those species while avoiding the weak-stock species."

He calls the collaboration between the conservation group and Morro Bay commercial fishermen "a very unlikely partnership," noting, "There aren't many cases were conservationists and fishermen come together to work together for sustainable practices."

Bell points out that if local fishermen who are asking regulators for local fishery management "walk hand-in-hand with The Nature Conservancy, we will all be much more powerful."

"There's tremendous potential for a vibrant fishing community to be re-established in Morro Bay, based on locally produced, sustainably harvested products," he adds. "All of us need to support the fishing community as the real stewards of our marine ecosystem.

"We can show a model to the world, or we can squeeze the fisheries so hard that we're relying on fish from overseas where they may not be sustainable. I'm terribly excited about the opportunity that exists here."

Central Coast Women for Fisheries, Inc., a new nonprofit group, is also dedicated to a sustainable future for the local fishing industry "and our coastal communities that we love," as the group's president, Marylse Battistella of Los Osos, writes in their latest newsletter posted on the group's web site at www.womenforfish.org.

An 80-year-old grandmother who's been involved with fishing more than 60 years, Katherine Evans, has contributed an article called "From the Heart: Our Fishing Heritage": "What a great mix of nationalities, political and religious persuasions, all thrown into a big melting pot the Pacific Ocean, with fishing as the common denominator. Is there any other industry that is so individualistic, fiercely independent, and yet so cohesive?"

Education is part of the women's effort, including a project to create a presentation illustrating the link between household water conservation and wild California king salmon stocks.

Down at Tognazzini's seafood market, Bonnie Tognazzini takes a customer to the nearby restaurant, where photos on the tables feature local fishing boats and their captains and families, and the specials board includes the names of the fishermen who brought in the catch.

"People get the connection between the fish and the fishermen. They know it's not just corporate boats," her husband Mark says.
People who care about the fisheries and the fishing community should become educated about "the truth," he says, pointing to a recent newspaper ad for a Valentine's dinner at a swanky hotel featuring "wild-caught Atlantic salmon."

"There's no such thing," he explains. "The only salmon on the Atlantic side are farmed."

Tognazzini recommends that local fish consumers avoid farmed fish and make a point of buying seafood labeled as caught in the United States rather than in countries that may not regulate their fisheries.

Buying fresh-caught fish directly off the boats is enjoyable in itself, he says. During the season, folks line up for hours for the chance to buy fresh whole salmon from the Bonnie Marietta, where the affable Tognazzini keeps up an entertaining patter.
"Seafood consumption is not dropping," says Algert, the harbor director for Morro Bay. "People are starting to ask for sustainably caught local seafood products. That's the future.
"Fishing will die if we can't get people to understand: If you like local seafood products, you like family-owned businesses, come down to the dock and see what's available or these businesses will wither away, along with the cultural history of the community. And once they're gone, they'll never be back."