It’s a beautiful, clear May morning, and I’m soaring thousands of feet over the Pacific Ocean.

I’m at the controls of a lightweight four-seater Cessna 172, along with my flight instructor for the day, Jon Stamets. Below, I see the white-capped breakers off Avila Beach and the coastline stretching for miles in either direction. Headset on, feet on the rudder pedals, and left hand on the yoke, it’s my first time in a small plane, and I’m feeling pure exhilaration.

“It’s not rocket science,” Stamets says, scanning the horizon, “Anyone can fly a plane.”

The sun glints madly off the water, silhouetting a myriad ships in Port San Luis. As I search the waves for whales, Stamets points at the delicately patterned Oceano Dunes under our feet.

“You can see everyone from up here,” he says. “You’ll see near misses all the time. You’ll have two cars coming up the hills heading straight for each other. I’m surprised there’s not more accidents.”

We bank suddenly to the left, and soon we’re turning wide circles over the water. I try to pay attention to steering the yoke as I write, and it’s making me a bit queasy. Noticing the effects of wind turbulence inside the cozy cockpit, I start to wonder if I was meant to keep my feet on the ground. 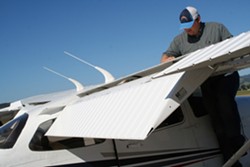 The plane seems as light as aluminum can get, yet sturdy and easily maneuverable. My initial nausea at the rapid ascent and turn toward the ocean quickly fades. Soon, I’m simply captivated by the feeling of freedom as we float over Pismo. It’s a view I’m not used to, and I wonder if I’ll ever see the coast this way again.

Before my flight, Stamets compared the plane’s controls to a car’s. Besides the intimidating rows of dials and instruments, it is, with a few exceptions, similar.

“When you’re in a car, you always have to have your hands on the wheel,” Stamets says. “In a plane, you just want to set it how you want it and let it fly.”

About a half-hour after takeoff, my instructor and I are leveling out and landing at San Luis Obispo County Regional Airport. A comfortable touchdown has us back at the hanger at PCF Aviation, Stamets’ employer and Cessna Pilot Center, specializing in aircraft maintenance, rental, and instruction.

For $59, anyone interested in aviation can take the 30-minute introductory flight. The school loses money on each one, but offers them as a way for the layperson to gauge enthusiasm for learning to fly, according to PCF’s co-owner and pilot Pat Mallon.

“It’s a longstanding tradition in the aviation community,” Mallon says. “It’s how pilots get other people interested in being a pilot.” 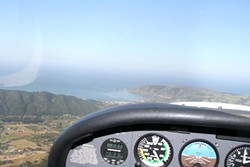 PCF offers the flights 365 days a year. They’re commonly bought as unique gifts for significant others or young adults, some of whom come back for more.

“If you have a family member or a friend who’s interested in flight, it’s a wonderful way to get them up in the air that first time, and maybe they’ll catch that aviation bug like the rest of us,” Mallon said.

With seven full-time flight instructors, PCF used an interactive Cessna Flight Training System, complete with integrated ground and air lessons, training people all the way up to being airline pilots. No less than 15 of the school’s instructors have gone on to fly for major airlines.

For those who want to go all the way, know this: The Federal Aviation Administration’s minimum standard for becoming a licensed pilot is 40 hours, though Mallon calls the number “unrealistic.” 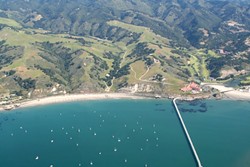 According to Stamets, it takes between 50 and 60 hours of flight time for the average person to obtain a pilot’s license, provided they stay consistent with their lessons, getting in the air roughly three or four times a week.

Typically, people who want to fly for a living become instructors in order to build up the 1,200 hours of logged flight time necessary to fly as a charter or airline pilot.

Licensed pilots can rent planes for weekend trips or as needed. Pilots can pay a single rental fee and leave the hangaring and the dirty work of maintenance to the school.

Like many who get the bug, Stamets was exposed to flight when he was young. His father and grandfather were pilots. After graduating from Cal Poly in SLO, he quickly realized working in an office didn’t suit him, and he worked on becoming a pilot himself.

“Not every person gets to fly airplanes and get paid to do it,” he says. “It beats sitting behind a desk every day.”