Utilizing renewable resources such as solar panels to power our homes are way ahead of using recycled water inside of our homes.

"We've been noticing a lot of people claiming energy independence with solar panels and renewables," Cal Poly grad Dustin Kash said. "We see that water is pretty far behind all of that and needs to catch up." 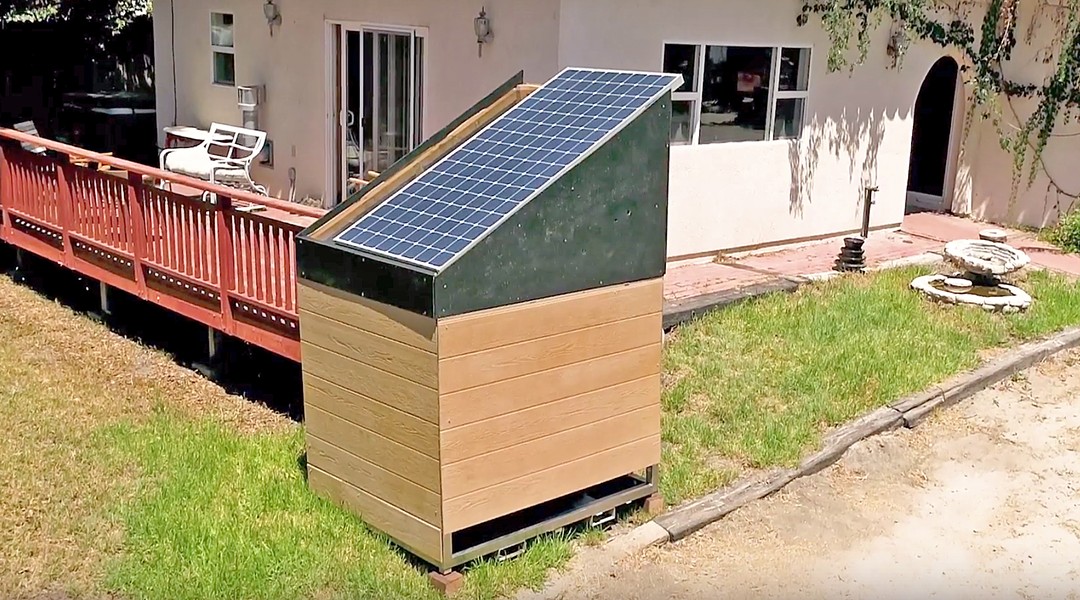 That's why Kash, with a bachelor's in environmental engineering; his partner Christopher O'Day, with a bachelor's in mechanical engineering; and Sangha Energy, a SLO County-based business specializing in home energy solutions, are working to develop a product that would enable households to recycle the water they've used and reuse it. The project's—SORA Water Recycling—goal is to reduce water waste.

It would take all your gray water (from the shower, washing machine, dishwasher, etc.), clean it up, and re-plumb that water back into the house for reuse.

The crew has built a smaller, to-scale, prototype and applied for the rights to a provisional patent but is looking for a little bit more funding to complete research and development and build a professional-grade prototype that they can test, with the goal of eventually selling them for home use. That prototype essentially looks like a box made out of wooden house siding with a solar panel on top and all the filtration components contained within.

"What sets ours a part from other gray water recycling that exists is, for one, ours uses solar power and solar distillation to create drinkable water, which is not something that exists right now," Kash said, adding that it also doesn't use replaceable filters or chemicals to clean the water. "You could say that it acts like a water treatment plant in the fact that it uses natural bacteria to disinfect the water and other similar processes."

It works through a series of "purification steps." First, the system allows the solids to settle, then water is pushed through a series of anaerobic and aerobic reactors "resembling a layer of soil near a river or creek, with limited oxygen." Microbes flourish, digesting impurities. A biofilter in the "oxygenated zone" contains different microbes that help disinfect the water. There is also a sand filtration system. Solar distillation, which uses sunlight and evaporation, helps make drinking water.

The product is meant to put out two different purity levels of water, one for home appliances and irrigation, one for drinking.

According to Kash, SORA still needs to do more water testing, but the team has so far demonstrated that their techniques can produce potable water.

"We have proved that the distillation component will produce 100 percent drinkable water. That can happen for sure," he said.

The idea has been marinating for about a year now, and Kash said the team's been working on developing the prototype for the last four months. He said the drought really highlighted the issues that California has with water, which may seem cheap and plentiful now (yes, even now that water rates have gone up and aquifers/reservoirs are starting to show their capacity limits) but probably won't be in the future.

SORA Water Recycling will eventually put up a crowdfunding page on Indiegogo, with several different options that could run the gamut from simply donating to eventually being able to purchase a kit. Kash indicated that it should happen before the end of September. If you'd like more info, head to sorawater.weebly.com or the SORA Water Recycling Facebook page.

• Oxford Suites Paso Robles is currently under construction on the corner of 4th and Spring streets in Paso and expected to open in early 2019 with 140 rooms, a conference space, a breakfast and reception area, and a fitness center. This hotel follows the summer 2017 opening of Oxford Suites Sonoma County in Rohnert Park.

• The San Luis Obispo County Regional Airport is offering a preview of its new terminal between now and when it opens on Oct. 15. Tours are free and open to the public for the 56,000 square-foot terminal, which has been under construction since 2015. There are five 40-minute tour times available between 11 a.m. and 3 p.m. To register for a tour, visit sloairport.com/tour. Δ