Caught in a moment: Bowie's first U.S. tour lives on in photos at Boo Boo Records

The arena was packed, music was blasting, and fans were rocking out. He leaned forward from his seat to get that perfect shot of glam rocker David Bowie, when suddenly a large man—the rock star’s manager—tapped on the photographer’s shoulder, demanding his lens. 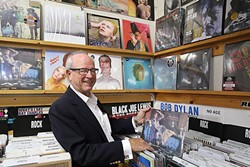 The year was 1972 and it was Bowie’s first time performing in California, as part of his Ziggy Stardust Tour. Glen Blosser, then just 25 years old, was a hair stylist and amateur concert photographer whose connections had landed him a fifth row seat at the Santa Monica Civic Center that night in October.

“I was fairly nervous,” said Blosser, now in his late 60s and living in Shell Beach. “You have to hold the lens pretty tight to get a good shot. In the midst of it, his then large, black manager came over, tapped me on the shoulder, and took my lens away. Then when he left I put another lens on the camera.”

A few days later, Blosser was sitting at the Sunset Bar and Grill in Hollywood, when who should walk in but Bowie and his entourage comprised of about a dozen British lads. Blosser, recognizing the manager from the concert, walked over and introduced himself. They had a laugh over Blosser pulling out a second lens after the first was confiscated and the photographer/hairstylist found himself having a drink with the on-the-rise Bowie. 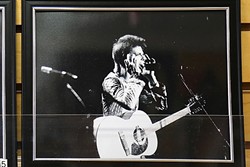 “We were the same age, just a couple of months apart. I was in the hair business and had long hair, and he had his hair bright orange,” Blosser said. “It was very casual. They all kind of tripped on the fact that I was able to get in there and take so many photos [44 frames]. They were very nice. I was taken in as a rock ’n’ roller. It was easy and fun.”

Blosser shot about a dozen more concerts over the next few years, but ultimately stuck to the hair business. About 30 years ago, he relocated to the Central Coast and took over ownership of the Barbery hair salon in Santa Maria.

When Bowie passed away from cancer in January, it took Blosser back to that night in 1972 when he was a young man shooting photos of a rock star in his prime.

“I was saddened,” said Blosser, who teared up as he recalled Bowie’s death. “I read that he was happy with his family; he had become quite regular after a life of being on stage.” 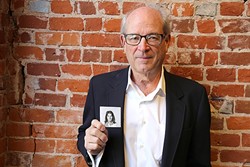 After all those years, Blosser still held on to those photos from that night in 1972 in Santa Monica. He told Boo Boo Records owner Mike White about shooting during the Ziggy Stardust Tour, and the two collaborated to put about eight of Blosser’s photos on display in the downtown music store starting in early February.

“A local artist was at this iconic event,” White said. “People really dig them. They’re excited for the story.”

While Blosser may have given up his lens for real, he still beams when looking at the images that caught such a fleeting, pivotal moment in music history.

“I’m just pleased and proud to have photos on the wall that I took 44 years ago that are still being looked at all these years later,” Blosser said. “It’s very big for me.”

Ryah Cooley is rocking out at rcooley@newtimesslo.com.