Steve Beightner, president of the district’s board, said the town of about 2,500 mostly retired residents isn’t able to fund the department alone.

“Right now we’re on a boat by ourselves,” he said. “We have local control, we have no money, and we have ancient equipment. We need some help.” 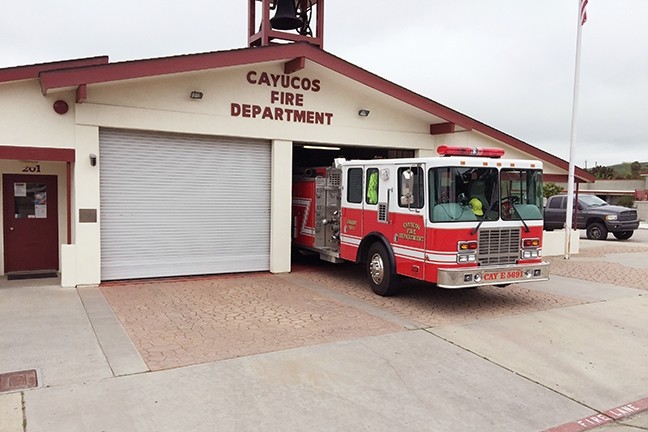 “If we choose option three, to dissolve the district and turn it over to the county, that does not mean that we don’t bring things to the table to be able to negotiate what services we want with the county,” Beightner said.

After an hour-long discussion about the three options during a June 1 board meeting, the board voted 2-1 on the intent to dissolve the fire department.

The next step, Beightner said, is to sit down with the county supervisors and come to an agreement on a contract that would benefit the town. Aside from the main goal of providing year-round fire protection for the town, Beightner said he intends to negotiate keeping the department at its current location and maintaining a reserve firefighter program.

SLO County’s 2nd District Supervisor Bruce Gibson told New Times that the end game for the district and the county is to provide quality fire protection services for the town at a modern standard.

“Everybody involved in that discussion is well aware of the proud history of the department, and moving forward, we want to honor that history and how it ties to the community,” Gibson said.

The fire station has been in service since 1948 but has been struggling with funding and staffing the department for the past four years. Property taxes and a special fire tax have not been enough to fund the district’s current volunteer and reserve firefighter staffed department.

The district board put Measure C-16 on its ballot in 2016, which would have raised the fire tax from $100 to $125 and increased the tax for single-households to $500. But the town voted against the measure.

“With the failure of that, the district is now having to face making the tough decisions,” Gibson said.

He added that he might have to recuse himself from any decisions put before the county Board of Supervisors because he’s a current resident of Cayucos, but it’s something he’s looking into.