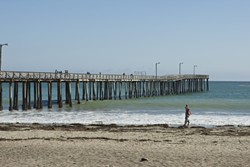 Very shortly—perhaps as soon as November—some much-needed work could be underway on the distressed and dilapidated Cayucos Pier, should the county approve the funding.

On Oct. 22, the San Luis Obispo County Board of Supervisors is set to approve on its consent agenda spending $510,000 to perform initial stabilization work that will bring the pier up to minimum standards while the county pursues state permits necessary to completely bring the aging structure up to snuff.

Consent agenda items are typically considered non-controversial and are expected to be approved. Funding from the county comes roughly half-and-half from County Parks project reserves and an adjustment from a contingency fund.

Repairs have been happening off and on following a number of serious storms that caused significant damage to the pier in 1993. Though the structure, built in 1876, is technically owned by the state, the county is responsible for its maintenance and operation. The seaward half of the pier has been barricaded off with a chain-link fence since July, when parks officials discovered massive deterioration to critical support structures.

The initial work would allow County Parks to temporarily stabilize above-water structures to keep the pier in one piece until a coastal development permit can be obtained from the California Coastal Commission for the permanent work.

“Everybody really wants to move on this,” County Parks Director Curtis Black told New Times. “It’s not really something we want to do in the winter.”

The commission has authorized a waiver that would allow the county to streamline the permit process, but as of press time, there was no official word on what the timeframe would look like. Black estimated the process could take four to six months.

“It’s been a long time coming and critical to keep the pier in shape not just for that community, but the whole county,” Black said, noting the increasing popularity of the Cayucos coastline for recreation and special events like the Fourth of July. “That pier is really central to the economy on the North Coast.”

That fact wasn’t lost on the Cayucos Pier Project, a group of citizen volunteers who, as of press time, had reached their stated goal of raising $100,000 for the renovation. Organization head Greg Bettencourt said donations began piling in following initial reports of the pier’s partial closure.

Bettencourt estimated that the majority of the donations came from people outside of Cayucos, and—speaking to the historic structure’s popularity—even outside the county. Those funds wouldn’t necessarily go toward the work that will be done following a successful permitting process, but for upgrades that might not be on the county’s essential to-do list, as well as to establish a separate fund to create an ongoing maintenance program.