It takes a decade or more for a piece of glass to be tumbled and tossed around the ocean before it’s prime for the picking. In Cayucos, that primo glass was treasured enough that a group of women decided to celebrate it, and on March 12 and 13, the town will celebrate its sixth annual Sea Glass Festival.

But there’s something else that churned up with that story—sea glass’s popularity, and the spiked demand for its charms, may have an unintended consequence.

Rumor has it that someone or a few people are seeding the ocean with glass. In other words, they’re purposely dumping broken glass into the ocean to replenish the stock. 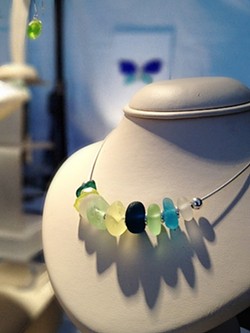 This loose piece of information first appeared in a New Times Feb. 25 arts story about the festival. Upon further investigation, Donna Halliday, an organizer of the festival who’s known as the sea glass queen of Cayucos, confirmed it.

“The rumor is true, people constantly throw out bottles,” she said. “Sometimes people take it to the end of the pier late at night and dump it out ... or in kayaks.”

It’s not clear who, where, or for how long it’s been happening—at least locals won’t say.

“Nobody really knows exactly who it is because they’re fairly stealthy about it,” said Steve Hennigh, owner of Good Clean Fun, a surf shop in Cayucos that offers kayak tours and surf lessons.

Hennigh certainly didn’t condone the practice, but he did say it happens.

San Luis Obispo County Parks and Recreation Director Nick Franco said that this was the first he’s heard about it and that no one’s been caught in the act. Franco said it’s littering—which is obviously illegal—and wondered if it would even be effective in its end goal.

Brad Snook, co-chair of the San Luis Bay Chapter of the Surfrider Foundation—which organizes beach cleanups and works to protect the ocean—agreed.

“If they’re taking new glass to the beach and dumping it into the ocean, that’s a significant issue, logically,” he said.

Laila Kollmann, another organizer of the festival, denied knowing anything about it. Kollmann said that sea glass—and the presence of freshly broken glass—is so rare that she doesn’t think it could be true.

“I think if someone was dumping it off the shore or something, you’d see a lot more,” she said. “That doesn’t even make sense to me, because it has to be out there for so many years.”

She did say that when the pier recently re-opened, there were reports of an incident of someone dumping glass into the ocean in plain sight.

“People were super furious. He was an out-of-towner,” Kollmann said. “That’s a pretty stupid thing to do.”

As for possible dangers of the routine practice, Halliday downplayed potential injuries to humans stepping on glass or marine wildlife ingesting it.

“I have never heard anybody talk about that part of it at all, and I hear all kinds of discussions,” she said. “That’s just never been anybody’s worry, because even if it comes up, the waves take it back out.”

“They don’t have any authority to decide what’s safe or not,” he said.