In 2015, Seneca Jacobson joined a Facebook group for parents with children who suffer from seizures. She's a service coordinator for Tri-Counties Regional Center in San Luis Obispo, working with families with special needs. At the time, her son suffered from seizures. 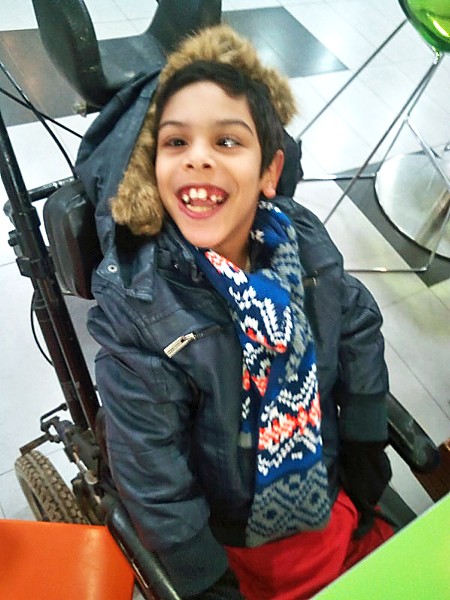 Living in Cayucos, Jacobson said, she attended groups and spoke with other parents in the area about her experiences with her son but she wanted to reach out to more parents. She joined the group wanting to learn about how other parents addressed their children's seizures.

She didn't know she would find friendship with a parent who lives in another part of the world and an adventure, which she began on June 11.

"I could just tell from the stuff she was posting that she was a mom on a mission to find anything that she could to help her child," Jacobson said.

Jacobson is talking about her new friend, Zhohra Rhomani, who lives in Morocco. Rhomani has a 9-year-old son, Nizar Khalid, who suffers from seizures, cerebral palsy, and scoliosis. She said Rhomani was asking a lot of questions about seizures because it was severely disrupting her son's sleep.

"I could tell that she was going through a pretty big ordeal as Nizar wasn't sleeping much and had a lot of tantrums, so I was trying to help her in that regard. I tried to connect her with resources that might help him behaviorally," Jacobson said.

The more Jacobson and Rhomani messaged each other through Facebook and email, the more Jacobson learned that her friend didn't have the same kind of medical resources and support that she did.

She said Rhomani also expressed frustration with not being able to connect with another family or parents who understand what it's like to raise a child with special needs.

"I realized that Nizar needed some adaptive equipment and there is a non-government organization called Gateway Medical Alliance that Zhohra was trying to get him a standard and basic wheelchair," Jacobson said.

Once again, Jacobson reached out to Wolff, who was able to get an adaptive stroller for Nizar. The stroller is a Convaid Trekker, a lightweight wheelchair that offers reversible seating, easy adjustments, and a folding capacity for travel. Jacobson boarded a plane to Morocco on June 11 to deliver the stroller and finally meet her friends.

"I would like to have this as somehow more than just a single experience," Jacobson said.

She wants to figure out a way to create a group or organization that connects international families in need with medical resources. Jacobson also wants to create a support group for families like Rhomani's, who are looking to connect and share their experiences.

In the meantime Jacobson has created a YouCaring online fundraiser for Nizar as he still needs a corset brace to counteract his spasticity and muscle contractures. For more information about Nizar or the help that Jacobson is corralling for him, visit youcaring.com/nizarkhalid-1023982.

The Cliffs Hotel and Spa, formerly The Cliffs Resort, announces its new name and the expansion of its in-house spa Dia Feliz Spa. The spa expanded its footprint by approximately 30 percent to include a couple's treatment suite, foot soak relaxation area, manicure and pedicure stations, and a new reception desk and lounge. The new treatment room allows for couples to enjoy massages together and features a fireplace and private en-suite steam room. Guests who opt for the spa treatment suite also receive complimentary champagne and house-made truffles. The Cliffs now offers the Dia Feliz Spa membership program—at $120 per month, members will receive a 60-minute massage, facial, or body treatment, one spa treatment add-on, five days of pool access, 20 percent off spa products, and 15 percent off hotel rooms. To learn more about the hotel and spa, visit cliffshotelandspa.com. Δ