With a Climate-Change-Denier-in-Chief in the White House, record breaking temperatures, increasingly violent storms, melting glaciers, and worsening ocean acidification, it's easy to become overwhelmed about our impending environmental disaster, and maybe even feel like it's all pointless and give up. But Greta Thunberg, the 16-year-old Swedish activist leading a worldwide school strike to demand action on climate change, isn't giving up. She knows the time to act is now, and though you might not be able to change the world, you can change your world. The place to learn how is at this year's Earth Day celebration on Saturday, April 27, in Laguna Lake Park from 11 a.m. to 5 p.m. (all ages; free; more info at earthdayslo.org).

After an opening welcome by Mona Olivas Tucker, the chair of the yak tityu tityu yak tilhini—the Northern Chumash Tribe of SLO County—you can expect a public drum circle led by Tim Costa, followed by great music by the likes of contemporary dance band Back Bay Betty, amazing Americana singer-songwriter Jill Knight & The Daylights, alt-rockers Dudeo Parez, and headliners The Mighty Croon Dogs, a band that can do just about anything. In between, the Desert Coast Dancers will also perform. 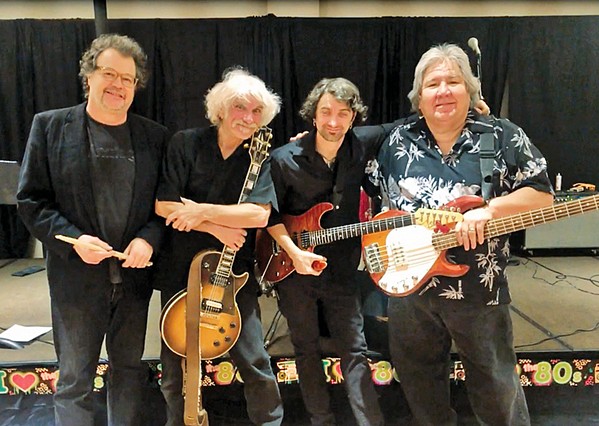 Vendors will have healthy foods, juices, beers, and wines for purchase. There's also free bike valet parking. Ride over with the family and make a day of it! Be like Greta and create the world you deserve.

The Fremont Theater (tickets at Boo Boo Records or fremontslo.com) has another fat lineup this week, starting with country star Aaron Watson playing on Thursday, April 25 (8 p.m.; 16-and-older; $30.83). His 2017 album, Vaquero, hit the Top 10 on the Billboard 200 Albums chart and at No. 2 on the Top Country Albums chart. His 18-year career has yielded over a dozen critically acclaimed albums. Kylie Frey opens.

Shallou and Slow Magic co-headline their Into the Wild Tour this Saturday, April 27 (9 p.m.; all ages; $24.96). Shallou is a Maryland-born musician and producer who came to electronic music after moving to Chicago, where he recorded his debut EP, All Becomes Okay, in his bedroom. Slow Magic is an EDM act whose start came in 2012 with the release of the critically acclaimed album, Triangle. 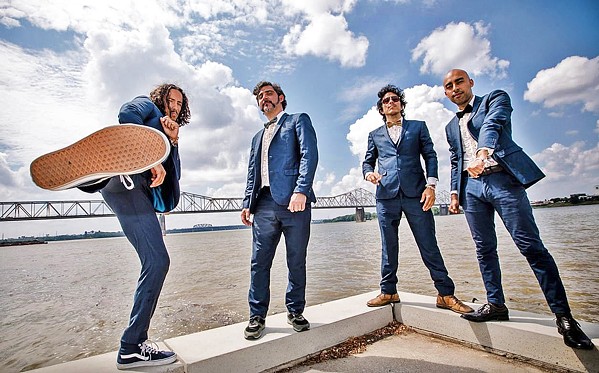 I'm most excited about the return of Chicano Batman on Sunday, April 28 (8 p.m.; 16-and-older; $33.17), with Brianstory opening. LA-based Chicano Batman knows how to put on a show! From their matching formal wear to their super cool blended Brazilian Tropicalía with early '70s psychedelic soul and romantic pop, they cook up some infectious and irresistible sounds.

Frontman Bardo Martinez explained in press materials their aesthetic: "We're making a particular reference that some people understand—Los Ángeles Negros, Los Pasteles Verdes. In the '70s, it was a big thing where all these cats were playing romantic ballads, but they were funky as hell."

Next Thursday, May 2, Gungor and their End of the World Tour plays the Fremont (8 p.m.; all ages; $30.83 to $42.56), with The Brilliance and Propaganda opening. Gungor is husband and wife duo Michael and Lisa Gungor, who've been compared to Arcade Fire, Bon Iver, and Sufjan Stevens. 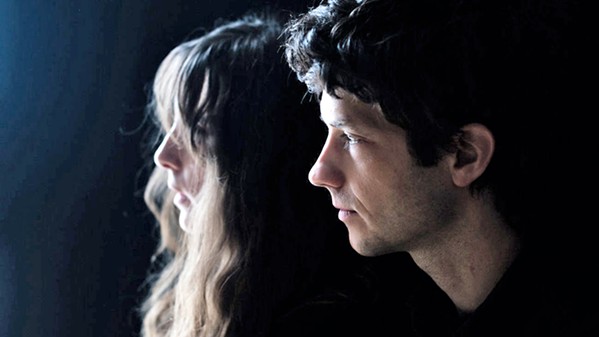 Legrand's voice has been frequently compared to Nico and sometimes '80s psyche rock singer Kendra Smith of Opal. This Mortal Coil, Cocteau Twins, and Big Star are a few of their influences. The duo adds percussionist Daniel Franz to their live shows.

Numbskull and Good Medicine is also bringing Wild Child—A Jim Morrison Celebration to The Siren on Saturday, April 27 (8 p.m.; 21-and-older; $18 presale at Boo Boo's and ticketfly.com or $20 at the door).

"The band also utilizes the same musical instruments live as The Doors did over 40 years ago," press materials read.

Rise Up and Rock: A Benefit Concert Supporting Survivors is at the SLO Brew Rock Event Center this Saturday, April 27 (2 p.m.; all ages; presale $15 student, $25 general, kids 12 and under free at slobrew.com; or $20 student and $30 general at the door).

This uplifting day supports RISE: Respect, Inspire, Support, Empower, a nonprofit organization "that provides crisis intervention and treatment services to survivors of sexual and intimate partner violence and their loved ones," according to their website. "All services are provided confidentially, at low or no cost, to anyone regardless of age, ethnicity, gender, sexual orientation, religion, or ability. All crisis services are available in Spanish and English."

Lady rockers Hot Tina go on at 3:30 p.m. These SLO music scene veterans are influenced by "Joan Jett and Blondie, a little Misfits, AC/DC, or Iron Maiden with a dash of Roseanne Cash and Loretta Lynn." according to their bio. I've seen them a bunch, and they rock hard!

Brass Mash, a horn-driven cover band that takes popular tunes, mashes them together, and arranges them for horns, starts at 5 p.m. They're one of the most fun local live bands around!

The SLO Grrrl Music Collective is also supposed to make an appearance. Most of your ticket cost ($20 of the $25 general and $10 of the $15 student) goes to RISE. Be part of the solution and have a great time, too.

The SLO Master Chorale presents a weekend festival of music and art by Ernest Bloch, a Swiss contemporary composer who lived and worked for much of his career in California. A seminar, photography exhibit at SLOMA, and concert are all scheduled. 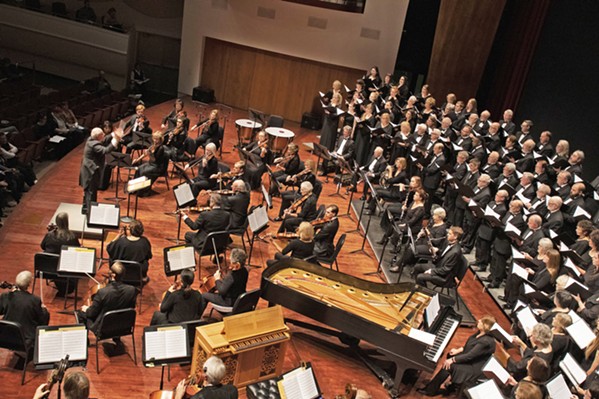 More than 100 singers accompanied by a full orchestra will perform Bloch's masterwork, Avodath Hakodesh, or "Sacred Service," commissioned by Temple Emanu-El of San Francisco in 1929, at the main event of the weekend, on Sunday, April 28 (3 p.m.; all ages; $10 to $38 at pacslo.org or (805) 756-4849), in the Harold Miossi Hall of Cal Poly's Performing Arts Center. An exhibition of Bloch's photography will be on display in the lobby beginning at 2 p.m. for ticket holders.

Cal Poly Professor Emeritus Eric Johnson, an expert on the photography of Bloch, will also offer two free workshops. On Friday, April 26 (3 p.m.), Johnson will present "A Composer's Vision" on Bloch's life, music, and photography, and his relationship with Alfred Stieglitz, father of modern photography, in the Davidson Music Center, room 218. On Saturday, April 27 (7 p.m.), Johnson will host Bloch's granddaughter and great-granddaughter, who will share stories of Bloch, his art, and his creative process at the SLO Museum of Art.

Two time Latin Grammy Award-winning guitarist/vocalist/composer Diego Garcia (aka Twanguero) plays with his band at The Siren this Friday, April 26 (7:30 p.m.; 21-and-older; $10 presale at ticketfly.com and Boo Boo's or $15 at the door). Expect a blend of Flamenco, rock, and blues.

The Pub Crawlers from Sacramento and the Tevis Ranger Junior High School Jazz Band from Bakersfield will be playing hot swingin' jazz at the Basin Street Regulars at a Sunday, April 28, concert (1 p.m.; all ages; $10) in the Pismo Vets Hall.

LA based singer-songwriter Miss Valeri Lopez plays three local shows this week, starting at the Morro Bay Wine Seller as part of the Songwriters at Play showcase on Monday, April 29 (6:30 p.m.); then at Bliss Café this Tuesday, April 30 (from 11:30 a.m. to 2:30 p.m.); and finally at Branch Street Deli on Wednesday, May 1, for another Songwriters at Play showcase (6 p.m.). All the shows are free. Accompanying herself on guitar or banjo, she writes sweet, well crafted songs that'll make you smile.

Portland AmeriCeltic band Castletown returns to the Frog and Peach on Tuesday, April 30 (10 p.m.; 21-and-older; free). They're touring in support of Traditions. Δ