Our local music scene kicks serious booty, so eight years ago, we here at New Times had an idea. We wanted to follow in the footsteps of bigger cities and create our own music awards to celebrate all the hard work, talent, and diversity of our local musicians. The New Times Music Awards was born along with the bronze Newtie Award.

This Friday, Nov. 11, you’re invited to celebrate with us when the eighth annual New Times Music Awards returns to the Fremont Theater (doors at 6:30 p.m.; show from 7 to 10 p.m.; all ages; $10 available at Boo Boo Records, New Times, and the Sun in Santa Maria).

The show opens with a performance by The Bucket Busters, a youth percussion group led by Music Motive proprietor Steve Hilstein. The event will also feature live painting by local artist Sara Lane, who will donate her painting for auction.

Fialta is an amazing indie-pop quartet that’s proving synth still has a place in contemporary music! This talented set of two multi-instrumentalist husband-wife pairs formed in 2011 and has released two superb albums. They were recently featured on NPR’s All Songs Considered.

Wynn is one of the most potent voices in the local hip-hop scene, a hard-working emcee who may have come up on the sleepy streets of Cambria but who’s found a smooth sound with lyrics that cut to the quick.

Formed in 2012 by four college friends, Próxima Parada delivers engaging blue-eyed soul, folk, and blues songs. They’ve since added a trumpet to their mix. Their track “Time in the Circle,” which is up for a Newtie, was also recently added to Songpickr: 2016 Best Songs playlist on Spotify.

Truth About Seafood members are old pros of the local music scene, having formed back in 1993. Influenced by everyone from AC/DC to Stone Temple Pilots, from the Beatles to Toad the Wet Sprocket, from Queens of the Stone Age to Supersuckers, this is a band that likes to rock and has a wicked sense of humor. Check out their ’80s hairband spoof video made for their award-winning song “Butcher & The Bride”: youtube.com/watch?v=hoAzIEx_1hE.

Come on down and join the fun! Beer and wine will be available along with a photo-op wall to get pictures with your favorite musicians.

Stand with Erin and Standing Rock

It’s sort of a cliché, but artists feel things deeply, which is why local songstress, banjoist, and activist Erin Inglish is loading up her touring van, filling it with donated supplies, and heading to Standing Rock to join the peaceful protest over the Dakota Access Pipeline, which threatens the water supply of the Standing Rock Sioux Reservation. 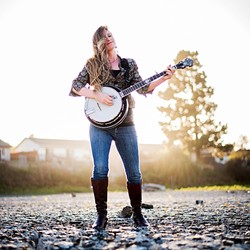 She’s soliciting donations on her website, erininglish.com, and as of Nov. 8 she’d raised $1,442 “from local donations to buy supplies for the camp at Standing Rock, and have a commitment for the donation of six solar panels, a large amount of homemade salami, and some winter clothes (socks, jackets, hats, gloves, thermals),” Erin said. “More help is needed. A bigger list of needed supplies is on my site.”

Inglish will join concert headliners The Cody Blackbird Band and special guest Tanner Scott. This event will also feature a silent auction and live onstage painting during the concert. To donate items to the auction or to find out more about aiding the Water Protectors at Standing Rock, call Amber Scott at 792-0505.

Punk, country, and blues, oh my!

Numbskull and Good Medicine Presents have teamed up to drop three great concerts this week, starting on Thursday, Nov. 10, when punk acts Guttermouth, Get Dead, and The Cryptics play Sweet Springs Saloon (8 p.m.; 21-and-older; $13 presale at ticketfly.com or $15 at the door). 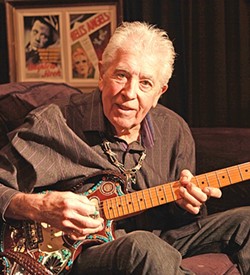 Guttermouth formed in 1988 in Huntington Beach, and have nine full-length studio albums and two live albums under their belts. “They’re infamous for their outrageous lyrics and behavior, which are deliberately explicit, offensive, and intended to shock, though usually in a humorous and sarcastic manner,” according to their bio. “This behavior has sometimes resulted in high-profile problems for the band, such as being banned from performing in Canada for a year and leaving the 2004 Warped Tour amidst controversy over their political views and attitudes towards other performers.” That’s punk, man!

The Randy Rogers Band brings their country sounds to the Fremont Theater this Saturday, Nov. 12 (7:30 p.m.; 21-and-older; $25 presale at ticketfly.com or $30 at the door). This is a band of road warriors, who are currently touring for their new album, Trouble.

“No matter what, trouble always finds us,” Rogers said in press materials. “And that title honestly sums up the last 2 1/2  years of making this record. At times it cuts deep and you can hear the pain, but it’s honest, it’s real. On the flip, we like to have a good time and you can hear that too. ”

Cody Johnson, touring in support of his new album Gotta Be Me, will open the show. The album debut at
No. 1 on the iTunes Country Album Chart!

Are you ready for this last one? We’re talking about the “The Godfather of British Blues,” the one, the only John Mayall on Wednesday, Nov. 16, in the Fremont Theater (7 p.m.; all ages; $25 presale at ticketfly.com or $30 at the door) with Zany Carney opening.

Mayall pioneered British blues about 60 years ago when he formed the Powerhouse Four as a 22-year-old. He went on to become a member of the Blues Syndicate later called the Bluesbreakers. He and his band backed up John Lee Hooker on his 1964 British tour. In 1965, former Yardbirds guitarist Eric Clapton joined Mayall’s Bluesbreakers and things really took off.

Mayall is in something of a career renaissance having signed with producer Eric Corne’s label, Forty Below Records, which released Find a Way to Care, an album that proves at 82, Mayall still has plenty to offer. 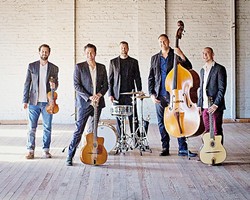