If there is one wine-country appellation in California where Zinfandel, America’s heritage grape, is most honored, it’s Paso Robles. The Paso Robles Wine Country Alliance (PRWCA) has 33 wineries making signature Zinfandels, and most make several versions. In fact, several wineries consider Zinfandel their flagship wine, with good reason. Each year, the PRWCA brings these wineries together to participate in the annual Paso Robles Zinfandel Festival. I am enamored with Zinfandels from all over California: Napa Valley, Dry Creek and Russian River valleys in Sonoma County, and Santa Barbara County, but few appellations rival the diversity of Zinfandels here. Zin can be credited among the great varieties that helped bring fame to Paso Robles and SLO County wine country.

Zinfandel has been grown in Paso Robles since the late 19th century, yet I discovered some news that surprised me: according to the American wineries advocacy group, The Wine Institute in San Francisco, SLO County has 29,000 acres of grapevines planted. Of that acreage, more than 26,000 acres are within the Paso Robles appellation. The variety with the largest number of planted vines is Cabernet Sauvignon (38 percent), followed by Merlot (15 percent), Syrah (10 percent), Zinfandel (nine percent), and Chardonnay (eight percent), the remainder are mostly Rhone and Spanish varieties.

Every year, in preparation for the Zin Fest the PRWCA chooses a winemaker or vintner to serve as the “blend master.” He or she crafts a Zin blend from 33 lots provided by each of the participating wineries. This year the blend master is Mike Giubbini of Rotta Winery on Paso’s Hwy. 46 West. For the 2009 commemorative blend Giubbini said that each winery provided him with five gallons of their estate Zinfandel. 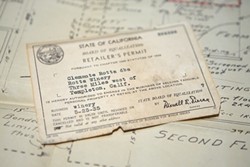 Guibbini’s maternal grandparents originally founded Rotta Winery in 1908, and he and his family live in the same farmhouse and own the winery now. The Rotta family had one of only three wineries in Paso Robles in the early 1900s. Their neighbors were Pesenti Winery and Andrew York’s Ascension Winery (now York Mountain). Giubbini noted that it’s still a family-run winery: His wife and son help, one of his brothers works with him full-time, and the other brother helps out when he’s needed. “We’re old-style here. I like to go into the tasting room on the weekends and take people who visit us on a tour of the winery,” Giubbini explained. He believes the 2009 Zinfandel is of the same quality as the 2004 vintage, which he noted was a very good year.

“We made the ’09 commemorative blend in an easy-drinking style, not over the top like some Zins. It’s lower in alcohol at 13.9 percent, has moderate tannins, and would be nice with a ribeye steak,” Giubbini explained. He made the blend with his production manager and tried several combinations to get the final result. “We tried them out on our tasting room staff and customers, using their comments to fine tune the blend to get the flavors and character we wanted.”

I tried the 2009 out of barrel the other day and it’s very fruity and drinking nicely although it’s only three months old. It’s comparable to the 2004 which was a very good year around here. The 2009 is going to be a good year for Zinfandel, but I’ll tell you for sure in a year when we put it into bottle,” he chuckled.

Like the other Paso wineries, Giubbini will be at Rotta offering treats all weekend: pairing their wines with cheese and other foods, barrel tasting, winery tours. During the annual Zin Fest you’re guaranteed a good time wherever you travel along Paso’s wine country trails.