Several residents who spoke at the March 12 Morro Bay City Council meeting supported the Central Coast Aquarium's (CCA) proposal to work with the city to create a new aquarium on the Embarcadero.

Leah Heidt, who teaches biology at Morro Bay High School, told City Councilmembers that she takes her biology class to the beach a lot to conduct marine science research. 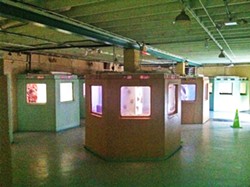 "For the past five years or so I've worked with the Central Coast Aquarium. We've been able to obtain grants and have aquarium specialists come to Morro Bay and have taken us to the sand spit to do data collection with sand dollars and water testing," Heidt said.

The Morro Bay City Council unanimously approved to work with the CCA, which is based in Avila Beach, to pursue a project that would enhance the existing Morro Bay Aquarium, which was vacated in September. Upgrades would include aquarium tanks, touch tanks, educational displays, and other opportunities.

The proposal was agreed to with four deadlines: A concept/philanthropic plan needs to be presented to the council within 90 days. A business, marketing plan is due back to the board in 180 days. A progress report on the philanthropic concept plant has 270 days. The final report is slated for the end of the first year and should include decisions on how to move forward.

Christine Johnson, executive director of CCA, said the success of the project relies on securing philanthropic and other non-earned revenues for design, construction, and operation of the proposed project.

According to a staff report, the proposed project has the capacity to generate an annual earned revenue of $691,000, but it's estimated that the annual operating expenses would be $813,000. Δ