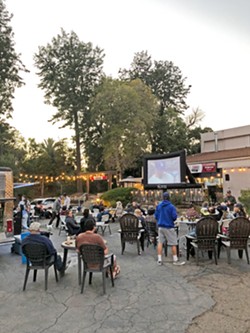 When it comes to serving alcohol and running a business in California, the rules tend to get complicated. But the gist, Peterson said, is that he's not allowed to serve alcohol in the parking lot outside his brewery or on any of the sidewalks surrounding it under normal circumstances. Customers aren't allowed to leave the brewery or designated patio area with beers in hand, and Peterson even installed "beer parking" spots at its bar inside, where people can leave their beers for safe keeping while they order from the food trucks and vendors that sometimes set up outside.

That's how it was before the pandemic hit, anyway.

After Gov. Gavin Newsom issued his first statewide stay-at-home order in March 2020, prohibiting indoor dining and closing breweries, wineries, and bars that don't serve food—establishments like CCB's Monterey Street location—the city of SLO relaxed some of its regulations to allow for outdoor dining parklets and expanded usage of parking lots.

Peterson was suddenly allowed to use his parking lot without paying for a one-day permit, putting up fencing, and partnering with a nonprofit like he'd had to in order to host his infamous anniversary parties. So he took advantage of the situation as best he could.

On May 5, 2020, Central Coast Brewing hosted its first ever "Outdoor Movie Night" in the parking lot of its Monterey Street brewery. The now recurring event kicks off every Tuesday at around 5 p.m., when CCB's food truck opens up to serve fresh tacos. Canned beer is available on-site, and a predetermined movie is projected onto a big outdoor screen at dusk.

The event started as a kind of replacement for regular operations, but as one of the few remaining ways to get out and see a movie throughout the pandemic, Peterson said it's become a staple weeknight activity for many SLO residents.

"People I think would be bummed if we stopped," he told New Times.

Attendees bring their own chairs, blankets, coats, and settle in for the night. There's lots of room in the parking lot to spread out, and Peterson said he didn't have to buy much extra seating or infrastructure to make it work.

"We've had a really lucky winter outside," he said. "We've only had one rainout for any of our nights and we've never had a movie night go down because of weather. We got really close two weeks ago. It rained at like 9:15 p.m.—we just barely got the screen in."

Aside from Tuesday movie nights, CCB's Monterey location has been closed for pretty much the entire pandemic. The brewery shut its doors over COVID-19 concerns for the first time in March 2020, when SLO County issued an executive order temporarily banning alcohol sales at bars and restaurants in anticipation of St. Patrick's Day. After that, Peterson said there was a lot of confusion over which alcohol-serving establishments could continue outdoor operations and what constituted serving food.

"So this was sort of easier just to close," he said. "And it needed some maintenance anyway, it needed a refresh."

He closed his Monterey location for much-needed renovations and started delivering food out of his brewery on Higuera Street, which serves up a pub menu of tacos, fries, burgers, and pizzas. Central Coast Brewing started canning beer more and kegging less (they packed about 860,000 cans this last year compared to 200,000 the year before), and applied for and received some financial assistance. All things considered, the brewery still lost about $883,000 throughout the pandemic.

But the CCB team is pushing through it. On March 25, Peterson reopened his Monterey location for outdoor and limited indoor service, unveiling an updated interior with a lot of extra space. There's even a new space inside for Tuesday movie screenings, when the city's parking and alcohol ordinances inevitably go back to normal.

The cozy brewery was bustling with regulars that evening, and Peterson said he has hope they've made it through the worst.

• To celebrate its 60th anniversary, Dewey Weber Surfboards recently opened up a new showroom at 979 Johnson Ave. in San Luis Obispo. The shop features apparel and surfboards, and will one day serve as a location for screenings, meetings, and surf events.

• Through April 4, community members can share their thoughts and ideas for projects coming to Harford Pier through an online survey at portsanluis.com. Δ