Opening night. The curtain rises. The audience goes wild. It's a rare and unforgettable thrill.

For Central Coast Brewing Brewmaster Brendan Gough, the brewery is his stage, the beers his players.

After racking up a throng of Great American Beer Festival wins, you could say these beers are actually more like stars. 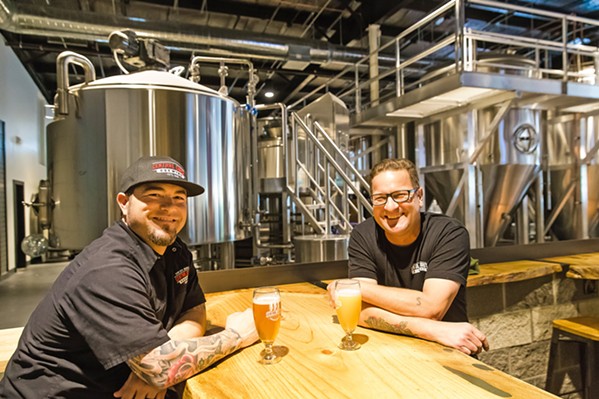 Understandably, Gough and the whole CCB team went through a range of emotions as the curtain rose on "opening night" last month. Of course, I'm talking about CCB's anticipated second location at 6 Higuera St. in SLO. If you haven't been there yet, it's probably because it's been too crowded.

Celebrating 20 years in business, this wasn't just any ribbon cutting ceremony. Many will agree: CCB heads aren't just any craft beer drinkers. They're super diverse in age and background, quite enthusiastic, and, as it turns out, insanely loyal.

A crowd of approximately 2,000 filtered in and out over the next eight hours or so, anxious to tour the shimmering 12,000-square-foot brewery and taproom complete with wood-fired pizza oven, sprawling bar, outdoor fire pit, and well-appointed game room.

If the brewery's first location on Monterey Street represents the original, quirky cult classic, this new venture is the action packed sequel, all stops pulled.

"It was chaos. At one point, there was an hour wait outside; people were standing in the rain," Gough said of the pandemonium. "We were all just taken aback by the response."

After so much building, planning, and scheming, the brewmaster, CCB owner George Peterson, and CCB Sales Manager Stormy Trevino were finally plopped into the middle of what had been a long-awaited two-year dream. 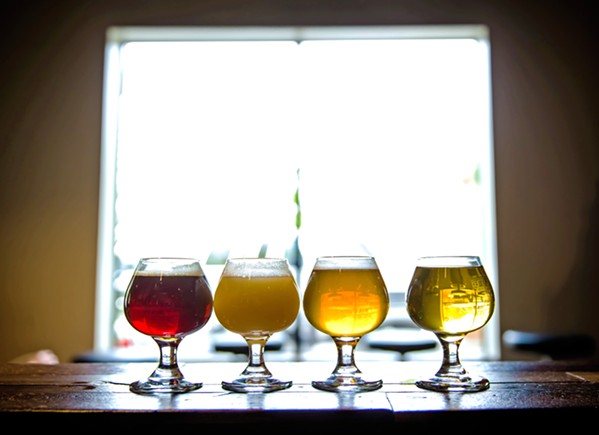 "It wasn't until opening day that it hit me—this is actually happening,'" Gough said with a laugh.

This is understandable. Since Gough left Firestone and signed on full time at CCB some four years ago, he's been focused keenly, acutely, on quality control.

The incredible success of CCB's Monterey Street Pale Ale—named best in the nation the past three years—as well as the brewery's Lucky Day IPA (which one a World Beer Cup gold medal in 2016) and General Schwarz (another 2016 GABF gold medal winner) stand as testament to the brewmaster's steady hand. 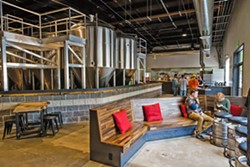 His philosophy is pragmatic: Manically perfect your beer before it ever sees the light of day. Make only as much as people will drink, and keep 'em wanting just a little drop more. Only supply that beer to local outlets that keep it fresh and tasting so. Lastly, and this is important: Party often (or, share the excitement with friends and fam).

Lately, a celebratory glow seems to hover over each new release (especially those trendy hazy unfiltered IPAs like Juice Box Hero). "Can parties" where you can grab cans of limited brews and seasonal releases will continue to pepper CCB's event calendar.

People want to be part of the buzz, and—as they say—a rising tide lifts all boats.

"We're hearing from craft beer drinkers who have never been to SLO who are stopping through to come to CCB," Trevino said. "This is a beer destination now, not just for our area, but for the state. "

With 18-foot-high ceilings, tables made of Cambria pine, custom furniture, and plenty of shiny, stainless steel, the new CCB does feel like a destination, although, for south end residents, it's become a welcome neighborhood joint, too. The brewery is family friendly, offering up pizza, sliders, and wings. There are very few television screens.

"We were all college students once. But you reach a certain point of your life where you want to go somewhere where you can enjoy high quality beer and good food in a relaxed atmosphere," Trevino said.

That's not to say that CCB doesn't keep it a little funky. The band Brass Mash played a soft opening Mardi Gras party recently, kicking off what will now likely be a beloved tradition.

"About 50 people were dancing out here with the band. Some friends and family were up on the catwalk watching. It was amazing just seeing people losing it and having fun," Trevino said. "I don't think we envisioned that happening, but once it did, we said, 'Let's do this again.'"

May 4 (May the Forth Be With You) will bring the return of live music by Brass Mash, and yes, Star Wars costumes are encouraged.

Even with all this "extra" flair, the focal point of the new space is certainly the brand new, state-of-the-art 20-barrel brewhouse at its heart. Complete with eight 60-barrel fermenters, this system allows CCB room to grow into new markets, albeit, as Gough said, "That will happen slowly, organically."

Again, a way cool club house is nothing without good beer, right?

"We want to let demand pull on supply and not flood the markets," Gough added. "To me, as the brewer, it's all about quality control and making sure the beer is as good as it can be. It's not difficult to make good beer. The hardest thing in the world is managing everything else."

I don't even have to say the beer is fresh on tap at CCB. All 48 taps—which include cider—are lovingly considered.

But what of the mothership—the locale that started it all?

The first CCB at 1422 Monterey St.—like the award winning beer that shares its name—will be sticking around for the foreseeable future. It's practically a SLO icon at this point, like Bubblegum Alley or nearby Frank's chili dogs.

Thankfully, Gough and the CCB crew have planned for longevity and legacy. More than a taproom, this new CCB location was built so friends and fans can hangout to shoot darts, nosh, and catch up around a crackling fire.

As it turns out, when your fans are this loyal, you want to keep 'em happy.

"Our first location is such a rich place. We love it, and it's a huge part of our history, but it was never meant to be a brewery," Gough said. "This place was the opposite—every single piece has been thought out."

Hayley Thomas Cain is playing Street Fighter II at the new CCB, if you want to challenge her. She can be reached at hthomas@newtimesslo.com.

Editor's note: This story was updated from the print version to correct a beer name.