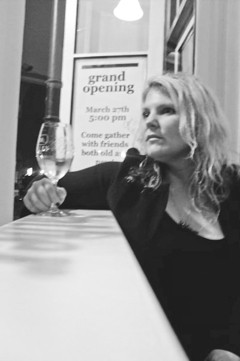 There are reasons that women love Fifty Shades of Grey. It offers dangerous, titillating shock, where other romance novels offer only mundane, pool-boy fantasies; it provides women with an accessible and somewhat relatable narrator; and, for most, it falls into the guilty pleasure zone of “so bad it’s good” due to a writing style that can only really be summed up in the quote, “I don’t remember reading about nipple clamps in the Bible.” See? Guilty pleasure. The books are graphic, easy, and relatively painless (minus the nipple clamps). Christy Heron’s new novel, Unrequited, continues in this vein, but without the overwrought fantasy.

“I never thought I would write a romance,” Heron said over the phone.

And, she’s right. Heron, a native of the Central Coast, hasn’t written a traditional romance. A former Pismo Beach resident and New Times calendar editor, Heron set out to write a story about a tumultuous and obsessive relationship without the frills and rose-colored lens of your typical romantic tale. In 2007, she began jotting down notes from her own personal experiences, and last year she set down to task, crafting the full book over the course of six or so months.

“I think, for me, this is a very real story,” she said. “I want something people can relate to. I don’t want cliché. The story is universal, the very nitty gritty of it, like a love story from an uglier perspective.”

Ugly, nitty gritty, real—these are all accurate descriptions of Heron’s work. The only one that doesn’t fit the bill is “romance.” Unrequited is much more akin to a psychological trauma, punctuated by a “pandemonium of penis.”

Bearing the subtitle “One Girl, Thirteen Boyfriends, and Vodka,” Heron’s book tells the story of young and troubled January Estlin—a 20-something writer who describes herself as “smart, somewhat easy on the eyes, and good in bed.” In a diary-like structure that spans the years 2004 through 2010, January narrates her obsessive sexual affair with Jack (aka Short Fat Fuck), a player type from Pismo Beach. Over time, they maintain relationships with other people; January gets a magazine job in San Luis Obispo; she drinks what appears to be a vat of vodka a week; and, at one point, they have “wet and painful sex” against a tombstone. Yes, a tombstone. It’s a supremely bizarre moment in a book chock full of problematic moments.

Let’s start with the narrator and go from there. January is a volatile cocktail of narcissism, desperation, and vapidity. She boozes, she bitches, and she bumps uglies with boys day and night. When speaking of her Jack fixation, she laments, “I wanted to die over him.” Then, she lists numerous ways as to how she would do it. Gun to the head? No. Run the car in the garage? Maybe. Continue to sleep with a emotionally distant and non-committal asshole? She’ll do it! Why? “I had a fascination with assholes,” January explains. This is about as deep as she gets, outside of the “pounding from Jack’s dick.” 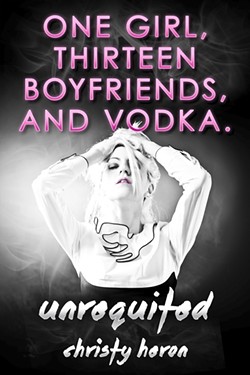 The entire novel is rife with these types of observations. Because the book is in a diary format, we are privy to not only the narrator’s penchant for self-destructive drinking and insight like, “He glimpsed my nervous boobs,” but also to her utterly confusing habit for nicknames. Jack is Short Fat Fuck (SFF). Her brother is Childless Brad Pitt. One of her co-workers, a lady reporter, is Lady Reporter. And, her boyfriends are given a labeling system, B1 through B13, like some kind of sexual bingo. This affinity for pseudonyms sets out to be clever but may wind up confounding readers, making them retrace a train of thought powered by Ketel One vodka.

Part of the problem is Heron’s manic writing style. It wants to be scathing, stream of consciousness confessional, like Hunter S. Thompson by way of Kim Kardashian. However, a lot of the time, the narrator’s inner dialogues and snappy observations can breed bafflement. For example, when describing one of her co-workers, January recalls both their coffee orders: “Venti. Me: iced coffee.” Then, in one of many italicized asides, remarks, “What is venti?” This is only one of many questions the book provokes. Others include: “Abattoir: another word for a slaughterhouse. It’s pretty, right?” The word, sure. The prose surrounding it? Again, questionable.

Because, for every “happenings happened,” there’s a phrase in this book that, at the very least, deserves respect for its uniqueness. Surely, never before has the sentence “All I wanted was him inside of me, where the blood came from, where he fit best,” graced the pages of fiction. Surely, a hickey has never been illustrated as a “thumping little purple Earth” in writing since, possibly, James Joyce’s naughty letters.

My comments aren’t intended as irony. There are moments of genuine emotion in Unrequited. Granted, that emotion is, if anything, tragic. Even the narrator acknowledges this when, in a rare moment of self-awareness, she speculates, “When would I be a noun and not a horde of tragic adjectives?” The answer never arrives, and neither does any kind of satisfying resolution. At the end, even though January finds happiness in a man named Cress, she’s still so profoundly damaged and aimless that the most this reader could muster was not empathy, but muddled pity.

“I hope to God I entertain someone,” Heron said. “I just want someone to enjoy it.”

If this is the goal of the novel, there is some achievement. The word “dick” is entertaining, and there are a lot of dicks in Unrequited—the organ, and the type of person. But if you do read the novel (and it is worth a skim for its use of the word “fuckwit” alone) know that you may be as unfulfilled and lost as January.

Jessica Peña is still trying to figure out exactly what a “pandemonium of penis” is. You can contact her at jpena@newtimesslo.com. Also: Full disclosure, Executive Editor Ryan Miller was hired to proofread the book.