To some, oysters are a rare delicacy, to others, a disgusting slurp of sliminess. Hopefully you’re in the former category and not the latter since this Saturday, Oct. 19, from noon to 8 p.m., it’s time for the Second Annual Central Coast Oyster & Music Festival on the Morro Bay Golf Course.

The word “oyster” actually refers to a variety of bivalve mollusks, some of which are edible and others, not so much. Belon oysters, eastern oysters, Olympia oysters, Pacific oysters, Sydney rock oysters—all delicious! Pearl oysters? Blech!

(On a side note, oysters produce pearls not from ingesting a piece of sand as commonly thought, but by covering an invading parasite with nacre. The largest pearl-producing oyster is the marine Pinctada maxima, about the size of a dinner plate. And pearls are indeed pretty rare; in a harvest of three tons of oysters, only three or four oysters will have produced perfect pearls.)

Now back to the eating variety. Jonathan Swift said, “He was a bold man that first ate an oyster.” Maybe so, but char-grilled oysters are pretty freaking good, and sliding down a raw oyster with the right sauce is nom-nom. Oyster bisque? Yes, please! I’m sure you’ll find oysters prepared in all sorts of ways, as well as other foods for purchase, but even if you don’t like oysters, you must like music. You’re reading the music column, after all. And there’ll be a ton of great music this Saturday!

Local electronic act TROPO has been burning up the festival circuit and developing a statewide following.

San Francisco’s Diego’s Umbrella is like a gypsy rock act similar to Gogol Bordello but not quite as punked out. Theatrical, campy, and too much fun for one band to have, these guys know how to keep a party going.

L.A.’s He’s My Brother She’s My Sister has been called “flamboyant folk,” “Psych-acoustic,” “desert pop,” and “estranged and glamorous.” They’re jangling, fun, and remind me in spirit of Edward Sharpe and the Magnetic Zeros.

And headlining the event is Smallpools, an L.A. quartet whose debut single “Dreaming” shot to No. 1 of Hype Machine within its first three days of release and continues to climb the indie and alternative charts.

How big is this event going to be? Well, last year they had 4,000 attendees, and this year they’re planning for 6,000! And this is going to offer a real alt-music-fest experience. SpinCycle, a locally based event installation company that got its start at Burning Man, is working along-side Bamboo DNA and The Do LaB (they’ve worked Coachella and Lightning in a Bottle) to create art installations.

Should be quite a day! You can enjoy a range of amazing oyster preparations, local wines, local brews, exclusive cocktails, and a full lineup of great bands. Dozens of chefs from across the Central Coast will go head-to-head for the “Best Oyster of the Central Coast” Chef Award, and the audience will be invited to taste their sumptuous efforts.

A food stage will be set up for chefs and wineries to entertain your palate. The Aphrodisiac Lounge will also be back, bringing you a raw oyster bar, sparkling wine, chocolates, and cheeses.

As usual, this event continues to benefit OPTIONS Family of Services, a nonprofit organization serving the disabled or persons with developmental disabilities and persons with a traumatic brain injury. OPTIONS provides a wide array of flexible programs that are customized for each individual they serve, with community accessibility emphasized at every level. Services include residential living, supported living, rehabilitation therapy, day programming, and vocational training. Learn more at optionsfs.org.

One final word: Fox News named the Central Coast Oyster & Music Festival number four out of the Top Ten Oyster Festivals in the Nation, but don’t let that stop you from going. Like a broken clock, Fox gets something right about twice a day.

The raucous, the retro, and the rare…

This week SLO Brew’s got an upbeat dance favorite, a classic punk film, and an iconoclastic beast hitting the club.

On Saturday, Oct. 19, Santa Cruz skate, surf, and party band The Expendables return with an evening of reggae and punk (7 p.m.; all ages; $20). Ripping guitars and floor-shaking fun awaits! Louder Space will open the show.

On Sunday, Oct. 20, check out FILMAGE: The Story of The Descendents/ALL (7:30 p.m.; all ages; $10), a documentary chronicling the classic punk act Descendents/ALL. Learn all about the late-’70s and ’80s L.A. punk act that started as The Descendents and became ALL. A Q&A follows with director Matt Riggle after the screening.

Aaron Porter, a roots rocker with influences ranging from Tom Waits to Wilco and Johnny Cash to Bruce Hornsby, plays The Shell Café this Thursday, Oct. 17 (6:30 p.m.; all ages; free), the first of several Songwriters at Play showcases this week. Special guests will include L.A.’s Paul Johnson and touring folksinger Kerry Patrick Clark. Visit songwritersatplay.com for a list of their weekly events.

The Coalesce Bookstore and Garden Chapel hosts Patrick Landeza and Bill Griffin this Friday, Oct. 18 (7 p.m.; $18; 772-2880). Award-winning Hawaiian slack key guitarist Patrick Landeza has joined musical forces with veteran mandolinist Bill Griffin (Cache Valley Drifters) to create a unique new sound. Landeza was voted the prestigious Na Hoku Hanohano award by the Hawaiian Academy of Recording Arts this May, becoming the first mainland-born artist to win. “I started learning slack key because I was around it all my life,” said Landeza in press materials. “My uncles played, and at first I learned from them.” In addition to his time with the Cache Valley Drifters, Griffin also played with folk-music icon Kate Wolf in 1974, producing, arranging, and playing on several of her albums including the Indie Award-winning Poet’s Heart. The two will also play on Saturday, Oct. 19 at the next Música Del Río House Concerts (7:30 p.m.; $20; call 466-6941 for reservations and directions).

The SLO County Jazz Federation has scored a win with internationally acclaimed guitarist Anthony Wilson and his trio, who’ll appear at the Unity Concert Hall on Saturday, Oct. 19 at 7:30 p.m. Fans of contemporary jazz won’t want to miss this skillful guitarist, composer, and arranger, who’s worked with the likes of Diana Krall, Bobby Hutcherson, Mose Allison, Larry Goldings, Paul McCartney, Willie Nelson, and (of course) his father, the legendary Gerald Wilson. The concert is a continuation of the Marilyn Greenberg Memorial Series. She was a founding member of the Jazz Fed who passed away in 2009. Admission at the door is $ 20 or $15 Jazz Fed members and $10 students.

The six-concert Beethoven Cycle Series returns this Saturday, Oct. 19 at 8 p.m. in the Spanos Theatre with The Ying Quartet, a group now in its second decade whose performances have graced most important concert halls in the world, from Carnegie Hall to the Sydney Opera House. They’ll perform Beethoven’s Quartet in A Major, Op. 18, No. 5; Quartet in E minor, Op. 59, No. 2; and Quartet in E-Flat Major, Op. 127. A free pre-concert lecture led by Cal Poly Music Dept.’s David Arrivée will be held at 7 p.m. in the Performing Arts Center’s Philips Lecture Hall. Student and general public tickets are $38.40 and $47 respectively. Call 756-4849 or order online at calpolyarts.org.

Gleeful 3 is coming to Cuesta College this Sunday, Oct. 20. “Our third annual Gleeful event returns with a musical blast from the past,” said organizers. “FAB at 50 celebrates Cuesta College’s 50th anniversary and brings world class doo-wop and other music from the 1950s. Performers will include The Alley Cats and much more! At 2 p.m. you can take a peek behind the scenes with backstage tours of the CPAC. You can enjoy a fantastic silent auction, partake in a wine tasting, and enjoy an assortment of tasty treats at 2:30, and the concert begins at 3. This event is always a fun favorite of the SLO County cultural scene.” Tickets available at cpactickets.cuesta.edu. 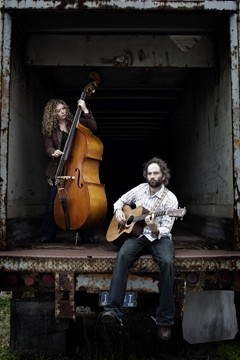 The Marvins are coming! “We’re touring down the coast from Portland and we’re making our first stop ever in San Luis Obispo!” said Carmen Paradise, one half of this modern folk duo who’s got a new EP out, Train Tracks. “We’re currently based out of Portland but originally from Detroit, and we’ve been playing music together and touring the U.S. over the last seven years, during which we have recorded four albums. Train Tracks is an album inspired by and written over the course of 6,000 miles of U.S. railway that we traveled by during our last tour from Michigan to the West Coast and back. We used our time on the train and the stories we gathered to create this album we’re now promoting.” This is fun, foot-stompin’, down home music. See them on Sunday, Oct. 20 from 10 p.m. to midnight at Frog and Peach.