It’s Saturday, Feb. 27, and I’m ready to rumble. Well, technically, I’m not ready to rumble, but the women of Central Coast Roller Derby (CCRD) are. They’re all decked out in their pads, helmets, and jerseys with names like Foxxy Hotcakes, Haddie Nuf, and Lana Luvhurts printed across the back. They and about 70 spectators are squeezed into the rink at Santa Rosa Park where white folding chairs line the edges. 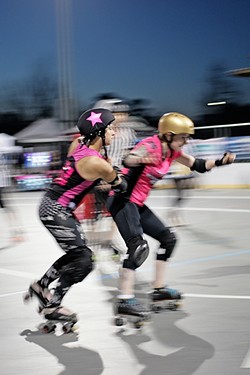 Food truck The Grilled Cheese Incident is serving up tasty sandwiches outside, while Central Coast Brewing is supplying the beer inside. Informational and vendor tables are set up at one end of the rink while Hot Tina—a nearly all-female punk quintet save for their male drummer—is pumping up the crowd at the other.

I drop five bucks on some raffle tickets, buy my wife a CCRD T-shirt and beer koozie, and make my way around the rink, where the derbyists are doing photo ops, calling for participants from past years to come out, be recognized, and have their photos taken together. I count more than 50 ladies by the final all-year group photo.

After another musical interlude by Hot Tina, the two teams in black and pink are given individual time to warm up on the rink, practicing the jam. Each team has a jammer, and she’s the only one who can score points. Most other team members are blockers, who try to prevent the other team’s jammer from breaking through the pack, where she can score points.

After warm-ups, the singing of the national anthem while skaters from each squad hold an American flag together and skate around the track, the exhibition match is ready to start.

The ref’s whistle blows and they’re off, a clump of spandex-clad estrogen fighting to keep the jammers from breaking through. The jammers have starred helmet covers to tell them apart from the blockers and the pivots, ladies who can become the jammer if given the starred helmet cover. The match consists of two 30-minute halves, broken up by a series of jams.

Around they go to the cheers of the crowd, jammers breaking through to score, blockers crashing to the ground, refs stepping in to stop the action or assign skaters to the penalty box. These ladies look like they’re having a blast, and despite the dropping temperature, the crowd’s eating it up. And why not? It’s entertaining and for a great cause.

The first official match of the league returns to Santa Rosa Park on Saturday, March 12, at 6 p.m. (gates open at 5 p.m.; all ages; tickets are $5 presale on the CCRD website or $7 at the door) when the Micro Bruisers take on the Loco City Derby Girls of Lodi. Are you ready to rumble?

Glen Starkey goes by Jaba the Beer Truck on the roller derby rink at gstarkey@newtimesslo.com.