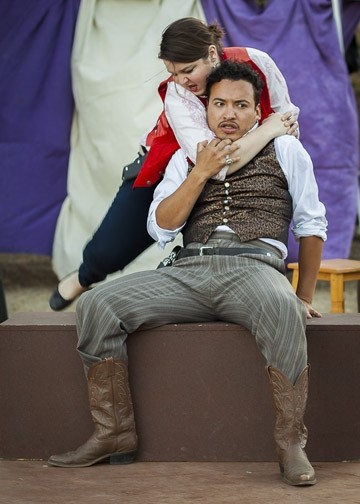 From the moment viewers step out of their cars at the Central Coast Shakespeare Festival (CCSF), they are transported back in time. Not to the sixteenth century, but to the Wild West. Viewers walk down a hill into a canyon of golden-brown grass, cut off from the rest of modern life. As seats are found and stragglers skulk in, an actor walks on to the saloon-style stage, brandishing a skull.

“To be, or not to be!,” the actor recites in a tone dripping with pomp. The cowpokes and winos at the bar immediately pull out their pistols and run the no-good Shakespearian out of town.

From the first scene of the first show in their run, the CCSF lets viewers know: This ain’t your grand-pappy’s dry old Shakespeare.

This new introduction to The Taming of the Shrew sets the tone for the troupe’s seventeenth season. They know that some people think Shakespeare can be boring, but the CCSF pulls out all of the stops to blow this stereotype out of the water. The actors make each word sparkle with over-the-top emoting and the end result is hilarious.

Though the troupe changes the play’s setting and opening, the CCSF version of Shrew is actually very true to the original text.

Shrew’s plot revolves around two sisters, Bianca (Angela Hutt-Chamberlin) and Katherine (Jessica Boles). Bianca, the younger sister, has a few guys vying for her hand, and Katherine is too headstrong for any of the men in the city. The sisters’ mother won’t let anyone marry beautiful Bianca until Katherine is wedded, so Bianca’s suitors start searching for a husband for Katherine.

It isn’t long before one of the suitors comes across Petruchio (Miguel Torres), the only man crazy enough to want to be with “Kate the cursed.” Petruchio and Kate get along like oil and water. Their big courting scene truly dazzles; watching them lob witty retorts at each other is like watching an intense tennis match.

The problematic part of the show’s story comes when Petruchio decides the best way to make Kate accept his love is to starve her and break her will with psychological tricks. This archaic attitude toward women seemed really out of place next to the humor surrounding it.

“We certainly thought about this a lot,” Michael Hofacre, the show’s director, said. “Back when [Zoe Saba, artistic director] originally approached me about directing Shrew, I said I wasn't interested because I felt the play was too outdated and misogynistic. But Zoe urged me to read the play before I said no. And that's when I fell in love with the romance at the heart of the story.

“Shakespeare was the man who had invented so many brave, wise female characters: Portia, Viola, Beatrice, Rosalind,” Hofacre said. “Because of this, it became impossible to imagine that Shakespeare was condoning the attitudes in the play.”

Petruchio’s treatment of Kate would have been hard to watch if Miguel Torres, who plays Petruchio, weren’t such a damn charismatic actor. Torres was a joy to watch every second he was on the stage. His motions and lines were full of so much verve and enthusiasm that it was impossible not to love him.

Boles brings some great energy as Kate and it’s worth the price of admission just to watch the sparks fly between Boles and Torres. Boles also plays Kate’s transformation from evil shrew to subservient wife subtly and masterfully.

There are only a few negligible misses is a production full of hits. One of the most resounding features is the play’s venue: The rolling golden hills of the Filipponi Ranch are the perfect backdrop for the old west theme of the show.

This is the troupe’s first year performing at the Filipponi Ranch. And, while the new venue is a little less grand than the River Oaks Amphitheatre where the CCSF had performed since 2009, the ranch is beautiful in a more rustic way.

The CCSF is a repertory group, so this same cast and crew gives viewers a better sense of the troupe’s range and allows different actors to get their time in the spotlight. This is especially true in CCSF’s second play this season—a doo-wop, ’50s themed version of A Midsummer Night’s Dream.

While The Taming of the Shrew is a spirited and funny night at the theater, CCSF’s production of Midsummer is outstanding. New Times was invited to a special viewing of the first dress rehearsal and, though there were still a few rough edges, the play was absolutely sidesplitting.

Directed by Cynthia Totten, the show’s plot is deceptively simple. It mainly focuses on a pair of young lovers who spend a night in the woods and the fairies that toy with their love lives. There is also a subplot about a group of actors, which is where the humor of the production shines. The play within the play was particularly uproarious. Though there were only two in attendance at this private viewing, there was a whole crowd’s worth of laughter.

Midsummer is a play that lives and dies by the actors. It’s easy to see how the exact same words delivered by performers with less of a comedic mind would fall flat, but the CCSF troupe knew exactly what to push, what to ham up, and what to play straight. It was a perfect storm of comedy.

While Torres is great again as Oberon, and Boles is a fantastic Puck, the real standout of this play is Tyler Lopez as Bottom, the weaver. It’s easy to tell that Lopez has seen his fair share of bad, scenery-chewing Shakespeare actors and he channels them to great effect in Bottom’s portrayal of Pyramus, the lover in the play within a play. Additionally, the amazing monologue by the wall (Krystal Kirk) had the audience in stitches.

To those who think that Shakespeare is lame and hard to understand: the CCSF production of Midsummer is the play to watch to change those preconceptions.

Intern Cliff Mathieson is out in the woods looking for Puck. You can contact him via Arts Editor Jessica Peña at jpena@newtimesslo.com.