The Central Coast Shakespeare Festival's season is over for this year, but mark your calendar for next summer's productions. Visit centralcoastshakespeare.org for more information.

It's a little after 6:30 on a warm August evening. We're pulling into the parking lot on a hill above the Filipponi Ranch property, and we're being warned to watch out for pirates.

"They're everywhere," says the parking attendant.

We drive forward, looking for both the next volunteer directing traffic and for the scurvy sea dogs reputed to be roaming these here parts.

"Is that a pirate?" my younger daughter asks from the back seat. After we safely dock our luxury land yacht (my family's nickname for our minivan), we unload our picnic basket, bags of blankets and coats, and our folding chairs. Keeping a sharp eye out, we walk down the path to the stage and seating area. There's nary a pirate in sight, but we know better than to fully let our guard down.

We hand in our tickets to the landlubbing volunteers and move to the far side of the seating area, the same place we sat last summer. This is the fourth year we've come to the Central Coast Shakespeare Festival's outdoor venue at the Filipponi winery property—an idyllic little valley surrounded by oak trees. We're here to see pirates, of course, in Treasure Island.

It's closing night of the Shakespeare fest, so we missed the offering by the bard, which was Twelfth Night. But it's impossible to go wrong with this summertime troupe of actors, who come to SLO from near and far to perform on the weekends between mid July and early August. My daughters still talk about Much Ado About Nothing and The Importance of Being Earnest from summers past. 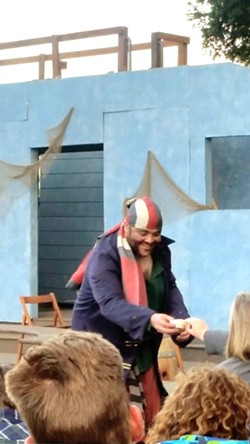 We're now sitting down, unpacking our dinner of tortellini with pesto, and checking the length of the line at the beverage stand. There are several Filipponi wines by the bottle or glass available, and my husband buys us a 2017 mourvedre. The sun's just beginning to descend, lengthening the shadows over the stage, where fishing nets strung along the walls remind us we're about to set sail.

I'm happily enjoying my first sips of the wine when we hear a commotion near the front of the stage. A pirate! He's wandering the audience, apparently asking for handouts. One of his shipmates begins working the other side of the audience—it looks like he's scored some empty cups ... and a cellphone? Who would give a pirate their iPhone?

The swarthy fellow comes closer to our seats and is mollified by a man a couple of rows up who offers a tub of broccoli salad to the hungry pirate. He's thrilled and dashes over to his compatriot. We strain to see what they're doing with their loot, and we can just make out a treasure chest yonder. In go the cups, the iPhone, and the rejected side dish. Huh.

The two pirates wander away as a few of their fellow buccaneers start taking the stage. We're delighted from the get-go by playwright Phil Willmott's take on Robert Louis Stevenson's classic—not only is there a passel of lady pirates, but the show is laugh-out-loud funny, featuring a handful of silly sea chanteys and rowdy dance numbers. Before setting sail, our hero, young Jim Hawkins, uncovers the famed treasure map in a chest belonging to a recently deceased patron of his family's inn. He and two future shipmates marvel at the chest's other contents: the ill-gotten broccoli salad, empty cups, and iPhone. We laugh as we see that Hawkins is savvy enough to know how to take a selfie with the anachronistic treasure.

We sit back and prepare to sail the seven seas aboard the Hispaniola with not only the infamous Long John Silver but with Sadie the Goat, a gregarious character based on a real 19th century female pirate. Thanks to their strength, tenacity, and spirit, the sea wenches win a tug-of-war match against the disparaging and skeptical sea dogs—earning the seafaring ladies a spot aboard the treasure-hunting ship.

By the end of the play, we're cheering as our hero lives to tell the tale of cheese-loving marooned Ben Gunn, the enterprising and fearless Lady Trelawney, and the upright (and uptight) Capt. Smollett. My daughters have been talking about the play ever since, and I have no doubt they'll be keeping an eye out for pirates as we look forward to next year's Shakespeare Festival offerings. Δ

Associate Editor Andrea Rooks is sure she'd be a very seasick pirate. Send buckets and mops to arooks@newtimesslo.com.