From the steps of the state Capitol to the front lines of a wildfire, 17-year-old Santa Maria resident Lesly Diaz's passion for helping animals has led her to several unique places.

Since she was in sixth grade, Diaz has worked as a volunteer for Central Coast nonprofit DogE911, where she's learned all about disaster response and triage for pets and animals.

"Growing up I loved animals and I always wanted to be a vet," Diaz told New Times. "All during junior high I was in the [DogE911] program and doing the events. I just started to be more involved." 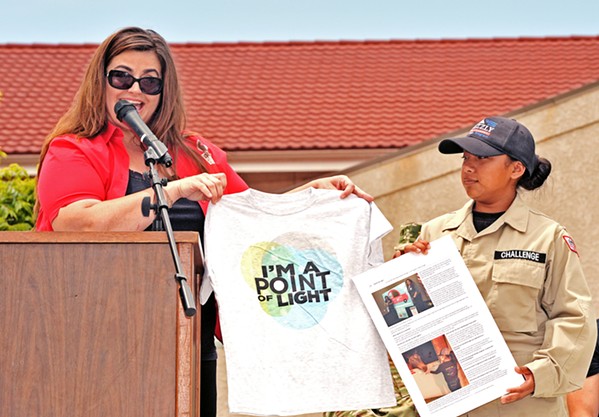 Diaz's involvement and interest only grew with time, and she's since poured hundreds of hours into the organization—an emergency training, prevention care, and disaster preparedness program.

"I was not a good public speaker, but this program helped me be more open for public speaking and not to be shy," Diaz said.

The most intense volunteer experience for Diaz was when she traveled to Butte County in 2018 to assist victims during the Camp Fire—California's most destructive wildfire in history.

Diaz and DogE911 founder Genete Bowen stayed in a hotel where several victims from the devastated town of Paradise had fled to.

Diaz said the group volunteered at animal shelters where they fed, walked, and cared for dogs that were separated from their owners. They also helped people find clean clothes, food, and other supplies.

"We were very busy," Diaz said. "It was heartbreaking. I was 16 at the time seeing these animals and humans without a home."

During her teen years, Diaz said she made some decisions that sent her down a bad path. To correct her course, she enrolled in Grizzly Youth Academy, a National Guard charter school program in SLO for at-risk youth. Throughout those rough times, Diaz said she could always look to Bowen for mentorship.

"She was always there for me," Diaz said. "She knows what I've been through. I appreciate all the work she's done with me."

Now, as Diaz prepares to depart Grizzly Youth Academy, receive her high school diploma, and join the Army Reserve next fall, she's being recognized for her volunteer efforts.

"This is a very special honor," Bowen said about Diaz's awards. "Lesly has been a huge asset. She has grown a lot over the years under DogE911 and developed confidence, poise, and knowledge."

Diaz thanked her single mother, Blanca, for supporting her growth and success.

"She was able to help me do all this, and it wasn't easy her for," Diaz said. "I appreciate all her support."

• The youth board of must! charities selected the El Camino Homeless Organization (ECHO) as the recipient of a $5,000 donation. Student board members from Atascadero, Templeton, and Paso Robles high schools met throughout the school year to deliberate their selection, volunteering at, and touring, several nonprofits in North County. "These youth are inspiring to be around and are quite curious as to the way the world works," Becky Gray, executive director of Templeton-based must! charities, said in a press release. "They were eager to learn and fully grasped the concept of the power of collective giving with a strategic focus." ECHO operates a safe and secure overnight shelter with 50 beds in Atascadero.

• San Luis Obispo Elks Lodge No. 322 announced that its members raised $22,632 as part of a yearlong campaign to benefit the California-Hawaii Elks Major Project, a venture that provides vision screening and therapy treatment to children with disabilities. Δ