For more info about the Central Coast Writers Conference, check out facebook.com/CentralCoastWritersConference.

Voted the best writers conference in California this year by The Writer magazine, the Central Coast Writers Conference (CCWC) celebrated its 35th year in San Luis Obispo from Sept. 26 to 28.

"It was started by a Cuesta professor called Lillian Dean," Conference Director Teri Bayus told New Times about the annual event held at Cuesta College. "Writers are solitary people, and [Dean] felt that they needed to come together." 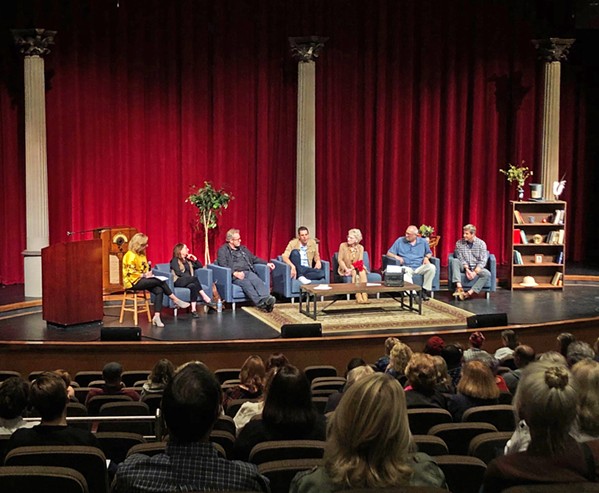 More than three decades later, the CCWC has grown from one day of classes to a full-fledged, three-day conference that features keynote addresses, question-and-answer sessions, workshops, panels, master classes, and networking opportunities.

Over her five-year tenure as conference director, Bayus has implemented changes that work to keep CCWC in the contemporary, which no doubt contributed to its 2019 win as the best California writers conference.

"I hired almost the entire staff off of Twitter," Bayus said.

Her social media savvy brought in some of the most notable individuals in the industry. Bayus also emphasized her global outreach to bring the best to the West.

"When I took over, I very much did an outreach to everywhere," she said.

A few of the conference's most notable people included Monica Piper, a stand-up comedian and the creative mind behind Rugrats, who taught a workshop and gave a hilarious, stand-up style closing keynote; Ricky Roxburgh, a Disney staff writer, who led a "How to Write a 10 Minute Movie" workshop aimed at teens; and Linda Aronson, whose "New Structures for New Audiences" class typically fills up in minutes when it's offered at acclaimed international writers conferences.

While many writers and teachers came from outside the Central Coast—some as far as Australia—to enjoy the three days of collaborative learning, local talent was nowhere near forgotten. Laure-Anne Bosselaar, Santa Barbara's poet laureate and winner of a prestigious Pushcart Prize for poetry, led poetry workshops and spoke on panel sessions.

"The faculty and the students mix with such democratic enthusiasm," Bosselaar told New Times after leading a compelling workshop that taught students how to engage an audience while reading their own work.

"Classes are full of hungry, curious, avid listeners," she continued. "You feel that you are here to exchange talent [with students] instead of teach."

Bosselaar added that Bayus instilled a particular spirit in her role as conference director, something she hasn't encountered at other writing conferences. "I've been to many conferences where there is a hierarchy, even among the faculty," Bosselaar said. "This is not the case in this conference."

For Bayus, it all comes back to accessibility.

"I wanted to make it so that every single person who wanted to come could come, that there was no barrier of entry to anybody," Bayus said of her approach.

By securing grants and sponsorships, Bayus sought to assist those who could not afford the full price of the conference.

"The only barrier to entry they would have is their own fear, and we were trying very hard to get rid of that, too," she said.

In addition to the 112 classes that the weekend offered, the conference also provided a valuable opportunity to attendees to collaborate outside the classroom that can prove just as transformative.

"The reason that writing conferences work, but specifically this one, [is] it's more about hanging out with other writers, talking about where you're stuck and what you're doing. Nobody else but writers sit around and play with imaginary friends all day long," Bayus said with a laugh. "We try to build a network and a community."

New additions to the conference this year included a pitching session with writing industry leaders for students, and pre-conference webinars for the teachers. The conference also introduced audio recordings of all 112 classes. The MP3 files will be made available for a small fee online. Δ