Staged at the SLO Little Theatre, Art asks: 'If I think your painting is crap, can we still be friends?'

The great divide begins when Serge drops 200,000 Francs on a completely white painting.

Of course, Serge (played by Steve Kipp) would adamantly argue, it’s not white in the slightest—however much it may appear so to the crude, untrained eye of the common observer. Upon closer inspection, the work is practically alive with crimsons and golds of the subtlest hues. And just wait until you see it from this angle! (Step over here! Don’t be shy!) The piece is actually composed of delicate white-on-white stripes. What, you can’t see them? 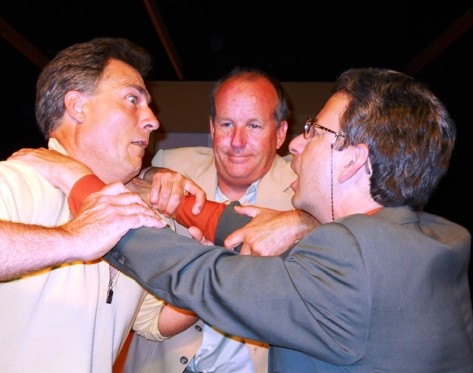 Outside of the play, Robert Rauschenberg’s daring “White Paintings” inspired a decades-long conversation—and gave fellow artist John Cage the courage to write his equally controversial soundless composition. It wasn’t really the piece so much as the dialogue it inspired that cemented the work’s place in history: As long as there was an audience, the work was never meaningless, as every viewer was quick to project his or her personality onto the seemingly vacant space.

Likewise, the fictional purchase of the Antrios begins a delicious, rich dialogue on the work’s artistic merit, as the conversation deepens and becomes ever more inextricable from the meaning and value of the three men’s friendship.

An incredulous Marc regales Yvan with the story of Serge’s 200,000 Fr. lapse in judgment, and to his frustration, Yvan refuses to side with him, instead taking the measured, “well, if it makes him happy” route. Marc accuses Yvan of feeling resentful of a man who can spend more than he earns in a year on a painting. Yvan insinuates that Marc is simply bitter that Serge (who, we learn, was once his sort of protégé where cultural matters are concerned) has gone and made a decision about art without him. Finally, weary of arguing, Yvan succumbs, admitting the piece sounds like an expensive piece of crap.

As required of a play with such a minimal cast, Kipp, Wenger, and Eister deliver fierce, dynamic performances. It’s a luxury to watch three such believable portrayals. Kipp gives Serge a healthy dose of haughty self-righteousness; a quality necessary for holding his own against Wenger’s discriminating Marc—whom Serge deeply respects, possibly even looks up to. Wenger has perfected the intimidating over-the-spectacles gaze, like an unimpressed professor.

Yvan, the workingman who has recently made the career leap from stationery to textiles, may be the most likeable character. There’s something touching about his struggles to make peace between Serge and Marc. But his efforts, and his inability to speak his mind on the Antrios, only exacerbate things. And as his character becomes overwhelmed by the growing disagreement, Eister’s reactions are reminiscent of the small child who covers his ears when his parents are fighting.

After his conversation with Marc, Yvan pays Serge a visit. And when Serge proudly exhibits his newly acquired masterpiece, Yvan is prepared. From listening carefully to Marc’s ridicule, he already knows to stand at an angle and thoughtfully praise the subtle, imaginary stripes and sublime, equally nonexistent hints of color. He even goes so far as to employ the noun “resonance.” Serge is relieved that at least one of his friends gets it.

Because we witness these characters in every possible combination of twos—Marc-and-Serge, Serge-and-Yvan, Yvan-and-Serge—we begin to recognize their weaknesses for gossip about whoever is not present. But we also recognize three typical reactions to challenging or experimental art.

First, the Serges, who happily snap up anything by avant-garde, groundbreaking artists, for which they consider themselves spectacularly open-minded. The Marcs, on the other hand, see them as gullible, unquestioning tools, and delight in telling the Serges so to their faces. But the Marcs, like the Serges, base their arguments on their knowledge of art history, which is where the two differ from the Yvans, humble, working-class types who have bills to pay and could honestly care less about the certain resonance or non-resonance of a white/non-white art piece. Their three voices could easily be representative of three common afflictions of the contemporary art critic: too fawning, too cynical, or too easily influenced by one’s peers.

But when the three of them all decide to spend a pleasant evening together at Chez Serge, each of their real voices inevitably surfaces.

An added dose of stress, triggered by Yvan’s extreme tardiness to the rendezvous, doesn’t help the atmosphere in Serge’s living room. Neither does Yvan’s breathless arrival and ensuing monologue—one of the play’s most electrically funny—on the gauntlet of future in-laws he had to run just to make it there. (Yvan is busy planning his impending nuptials, and naturally, in trying too hard to please everybody, has overextended himself.)

The men’s escalating discussion, which effortlessly fills the remainder of the play, has all the lacerating, eloquent forthrightness of a bad review, if far more layered. Soon, before the glaring white of the Antrios, all pretense has crumbled. It’s as if the painting’s very presence puts anything less than brutal honesty out of the question. Soon, Serge and Marc are revealing their honest feelings, not just about the Antrios, but about one another—opinions they’ve privately kept for years. Serge, like the fabled emperor discovering his nakedness, puts the painting away. But its effect—its resonance, if you dare!—lingers in the room. Yvan, poor amoeba, can no longer hide in the opinions of others, and is ruthlessly confronted for his spinelessness.

Finally, it occurs to Serge that the only way to redeem these dear friendships is to separate their value from that of the Antrios—though that extrication could be painful.

Arts Editor Anna Weltner has a Jackson Pollock to sell you. Contact her at aweltner@newtimesslo.com.

*This article was altered on Sept. 13 to include portions that were cut from our print edition.