In the quiet neighborhood adjacent to Bishop Peak, a small crew is constructing a home slated to be passive house certified.

According to the Passive House Institute, this type of home or building is created for energy efficiency, comfort, and affordability.

"Passive houses allow for space heating- and cooling-related energy savings of up to 90 percent compared with typical building stock and over 75 percent compared to average new builds," the Passive House Institute's website states. 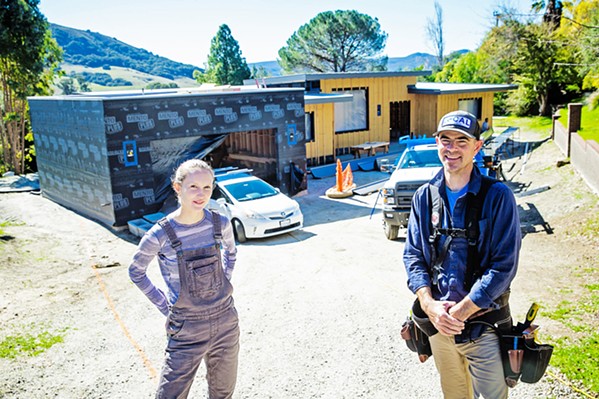 A certified passive house makes efficient use of the sun, internal heat sources, and heat recovery; it also uses passive cooling techniques such as strategic shading to keep the structure comfortably cool. These builds use less than 1.5 normal cubic-meters of natural gas to heat 1-square-meter of living space for a year.

As it's being constructed, the Bishop Peak site is often visited by various people in the industry, construction workers, contractors, window glaziers, architects, and others.

CAIRN Collaborative founder Michael Horgan said he invites fellow craftsmen and women to the building site to teach them how passive homes are made in hopes that the information is put to use and shared with others.

Horgan has been in the construction world since he was 15. He traveled and built, studied at Worcester University and Boston University, taught, and eventually went back to his first passion.

After working on a renovation project to convert a house to zero-energy, he said he knew he could do more to reduce the carbon footprint of a home, extend its longevity, and elevate the comfort of its design for homeowners.

"It's really easy to do. It's just careful attention to the things that you're putting on the house," he said.

Walking through the frame of the Bishop Peak area home, Horgan and McKay talk about the materials they've chosen to use, such as a small box that uses two amps of power to filter air in and out of the home and recycled wood fiber insulation.

McKay explains that the design of the home creates efficiency. For example, if a home has bathrooms and the laundry room on one end of the home, it's more efficient and cost-effective when installing water lines.

Horgan and McKay's project is the first of its kind on the Central Coast, but they don't want it to be the last.

• Paso Robles is looking for volunteers to join the Supplemental Tax Oversight Committee. In November 2020, Paso voters approved a 1-cent supplemental sales tax. Measure J-20 calls for advice and oversight by an independent committee. The city is now accepting applications for appointment to that committee. Member terms run for three years, starting on April 1, 2021. Members can expect to dedicate one to three hours every six months to ensure that the existing half-cent sales tax revenue as well as Measure J-20 revenue are spent in high-priority areas identified by the City Council and to provide necessary feedback to the public. Download an application from the city's website at prcity.com/advisorybodies or pick one up by appointment at the Paso Robles City Hall Annex, 821 Pine St., suite A. Drop off completed applications at the City Hall Annex or email them to adminservices@prcity.com. Applications are due by March 12 at 5 p.m. Δ