There's an earthquake; you dial 911; no one answers & what happens next?

The ground shakes, the sky burns. All hell breaks loose, and you need help.

So you call 911, and there is no one on the other end of the line. Not even a busy signal. The phone is dead.

Your house is in shambles. Two of your children are injured, one severely. Both are disoriented and screaming. A third is in school. Your husband is at work. Then you realize you yourself are bleeding. 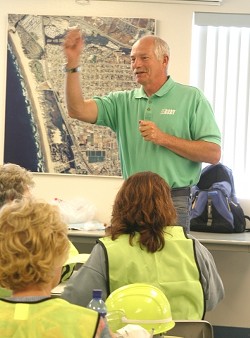 #All of a sudden screams and shouts from the neighborhood can be heard. The ground shakes again; your house starts collapsing with the sound of shattering glass and groaning wood. More screaming.

You quickly realize that no one is coming to help you. You don't know what to do or where to go. You smell gas and see wiring. Where are your children? One is now partially buried under rubble. Both are screaming, and now you feel a sense of real panic. You can't find anything. What do you do first? Your wits are no longer about you.

Because there's a good possibility, in the event of a major disaster, that no one from any official agency is going to come to your aid. There just aren't enough emergency personnel to go around. Spread thin would be putting it mildly.

We're all too familiar with the California calamities such as earthquakes, fires, flooding, and mudslides. While we seldom have to consider the destructive forces of hurricanes and tornados, there does exist the possibilities of tsunamis, nuclear radiation, hazard material spills, derailments, transportation accidents, civil disturbances, terrorism, and even war occurring on the Central Coast.

In case of emergency: Things you might not know:

Bull, you say. The odds of any one of those happening are absurd and ridiculous.

Fine, but in the event that anyone of these does occur, we are going to be paralyzed.

Less than 30 percent of SLO County's population and most likely less than that are prepared for a disaster of major proportions, one that would leave you on your own without emergency services for 72 hours. That's three days. We're not talking flashlights and batteries here. We're talking about giving yourself or someone else serious medical aid, carrying out search and rescue, putting out fires, evacuating buildings, and avoiding the hazards of hazardous materials and downed or exposed electrical lines.

What it's about is how you are going to be able to take care of yourself, your family, and your neighbors until help does arrive. 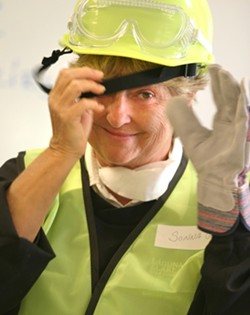 #Which is why SLO County fire has adopted an emergency program first introduced in this country more than 10 years ago by Honda Motor Company of Japan. This kind of program is standard procedure in the world's most prolific earthquake region. When Honda first set up shop in the U.S., they were surprised to find out that we didn't have across the board measures in dealing with major disasters in the workplace or in the home.

U.S. government agencies and several major cities across the country were quickly attracted to the idea, including fire officials in California who all realized the benefits and started up their own versions of all volunteer programs to teach people how to become self reliant if help wasn't immediately available.

"In a major emergency, 911 will go down in a heartbeat if it overloads," said Bob Neumann, who spearheaded the drive for a program here in 2001 while he was fire chief of San Luis Obispo. "People will need to take care of themselves."

Called CERT, the County Emergency Response Team, it's made up of neighborhood volunteers from Paso Robles to Nipomo. All attend a training program taught by officials from local fire departments.

"CERT's purpose is to lessen the load on emergency services and make people in the community helpful but in a way [that] they don't become victims themselves," said Cambria Fire Chief Bob Putnam, one of the leaders of the program. Cambria was the near perfect starting point for CERT because of its vulnerability to fire and flooding and the sparseness of emergency personnel. "CERT volunteers can help free up firefighters to fight in the field where they belong," said Putney.

But CERT members do a lot more than just free up firefighters. For $40 and five nights of extensive study, what they learn is not only crucial, but critical.

The goals of the program are obvious enough: prepare yourself to survive, protect yourself so you can help others, and to work as part of an emergency response team.

#"The primary thing we are trying to teach is preparedness," said Putney. "We get people who are interested in helping their community, those who won't have to think about it after the event happens because they will be ready to go without electricity, or water. They are planning for an emergency on their own, to expect the unexpected."

CERT trainees don't learn tips. They learn practical experience. Like how and with what to fight a fire, how to treat someone who has a bone sticking out of their leg, how to set up first aid triage (a system to assess each patient and prioritize them according to their needs), and proper search and rescue techniques. Much of their training is hands-on, in very realistic situations and settings.

Trainees come from all walks of life, from retirees to college students, scientists to scholars, but mostly just plain ordinary folks.

Pamela Voge, a CERT member who has survived many hurricanes in Florida and now lives on the Central Coast, said, " There's a real need to have people aware, because by the time you get help it can be hours, sometimes days." Voge added, "Since we're in an earthquake prone area, we should learn a whole lot more about how to take care of ourselves, our families, and our neighbors."

Jeri Farrell, another CERT graduate living in Cambria, is 67. "One of the things that really caught my attention is what happens if you dial 911 and no one answers," she said.

Putney says CERT is more than having enough food and water. It's planning. "How do you deal with a husband out shopping, an older daughter who's at the gym, Mom is at home, and there's an earthquake or fire? How do you get ahold of each other?"

Putney says one of the first and perhaps the most important elements of the program he teaches is how not to become a victim yourself. You can't rescue or help anyone if you are disabled, he says.

#CERT also teaches disaster medicine, which includes basic first aid skills, enough to spot the dead from the living, and how to prioritize the injured so they won't end up dead. Putney says CERT does not teach CPR, leaving that up to the Red Cross. Most CERT members will go on to learn the life saving procedure, and while it's advantageous to know, CPR isn't strongly emphasized because the time it may take to save one life may jeopardize the lives of many others.

Treating the wounded while the world is turning upside down requires more than physical skills. Trainees learn the fundamentals of disaster psychology, how to cope with the dysfunctional, disoriented, or disorderly, and how to best take care of infants, children, and the elderly.

Other principal areas covered by CERT include how to recognize the best way to fight fires, how to survive a major earthquake, and knowledge of hazardous materials. There is even a chapter devoted to terrorism.

Finally, CERT teaches people how to work as teams, which can be critical during triage or search and rescue.

"Most of America has become dependent on picking up the phone and calling for help," Putney said. "Help may be unavailable or a long time away, so we hope people learn how to be self-reliant."

The last night of training is functional skill night, according to Neumann. CERT trainees by that time have learned how to find and shut off utilities. But this night is the real test: How to enter a building or area fraught with all kinds of dangers to help victims of a major disaster. Dressed in bright yellow hard hats and vests, armed with flashlights and medical supplies, they are ready.

CERT graduates volunteer to help with the exercise. Adorned in all kinds of makeup to simulate all kinds of wounds, they writhe on the ground, lay trapped beneath beams, or aimlessly walk about in a fog.

#Many are screaming. This is how CERT trainees find them when they enter the ruins, in two teams, one search and rescue, the other for medical aid. Amid the chaos are obstacles and lethal live electrical wires. Rescuers who come in contact with the wires are "declared" dead and get a red ribbon strapped around their arm for their misstep.

For people who have never experienced such a scene, it is quite alarming, even shocking to some. It looks and sounds very real.

Deseraiye Ramirez, who was acting as an injured patient, said, "A class is usually shocked the first time they experience this, and very flustered."

Trainees quickly get the hang of it, however, said Neumann. "You need to train people to do things sort of by rote in a high time of stress."

After they graduate, CERT members end up with a helmet, vest, gloves, flashlights, and other safety gear, plus an extensive booklet providing information about the dangers around us that we take for granted. The chapter on hazardous materials alone should be posted in every home, and newsroom for that matter.

CERT members pay up front, and the rest of the cost for supplies and training is borne by donations and grants from the state and federal governments, the SLO Sheriff's Department, several fire agencies, corporate sponsors, and local businesses and individuals. Putney and Neumann are confident that not too long in the future CERT members will be in every community of the county.

#CERT has already been put to use in SLO County. Putney says he has employed his 90 active members at least three times. "I put them in the streets or called them in to help us most recently when we were in a jam when we had large wind- and rainstorms," he said. "We deployed them to look for downed tress and power lines, and flooding. They were extremely helpful."

"Yeah, right," is the answer most people will give if you ask them if they are prepared for an earthquake, or any other major disaster that may occur on the Central Coast in the future.

Some will answer yes. But even they would be wrong.

There's the story of one CERT trainee who thought he was prepared for the "big one." He had all the necessary supplies and tools, but they were housed in a part of his garage that would be the first to crumble in an earthquake. All his food, water, medical supplies, and tools would be under rubble, of no use.

"News to use" CERT is not. It's far more comprehensive. It takes just a little bit of time, and a lot of caring. As corny as their slogan appears - "Me and my buddy will put on our hardhat, and our goggles and mask and our gloves, we'll do a size-up" -- there may come a time when you are injured and on the ground, crying for help. You look up and see a person in a yellow hard hat. You'll know you're in good hands.

Because that day may come when no one answers 911.

Managing Editor King Harris can be reached at kharris@newtimesslo.com.