Change your views: The pandemic pushed residents outside and onto local trails

Ask any SLO County resident what they love most about living on the Central Coast, and their response will likely point to the region's vast amount of open space and the gorgeous weather.

The appreciation for outdoor recreation was reinvigorated last year when the public health crisis resulted in stay-at-home orders that effectively closed entertainment and restaurant industries; the orders also came with a recommendation to get outside at a safe distance from others.

Sheltering at home also halted campers from visiting state parks, with the exception of day-use hiking; however, local and state health officials recommended individuals stay in their respective communities to slow the spread of the virus.

Shaun Cooper, senior planner for the SLO County Parks and Recreation Department, said the department saw a tremendous increase in local residents exploring what was in their broader backyard.

"I think we've seen a direct correlation in the time period of COVID-19 to our spike in use. The use we see is typically seasonal, so we get more users in the summer," he said. "But with COVID, we saw spikes later on in the year and through the winter."

One of the more popular trails in the county that tracks its daily bicycle and pedestrian visitors is the Bob Jones Trail. Cooper said the trail has an electric counter that's been logging visitor data for the past three years—the data is helpful when SLO County Parks and Recreation applies for grants for its outdoor spaces. 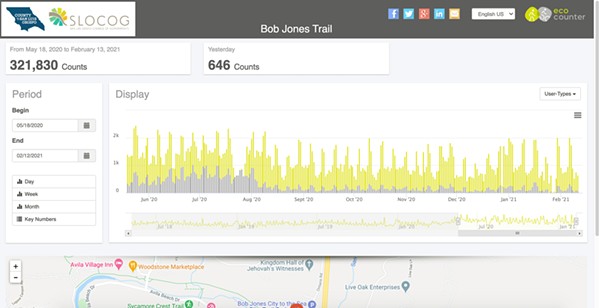 Before the pandemic, the trail would see an average of 800 to 1,000 pedestrians on the weekends and anywhere from 300 to 600 pedestrians during the week. The visits fluctuated depending on the season, day, and weather.

From March 2020 to June 2020 alone, the trail averaged 500 to 800 pedestrians on weekdays and saw more than 1,000 weekend visitors. Those averages remained steady throughout the year and have continued into 2021.

If a resident is looking for a trail that isn't as heavily trafficked, Cooper recommends checking out what the county has to offer on its website. Under the "trails" section of the website is a link to an app that displays all the outdoor recreation spaces and an interactive map along with it.

Along with the location of the trailhead, the app details the length of the trail, its difficulty level, who you're sharing the road with, and trails in the same vicinity.

To switch up your local trail experience, Cooper suggests logging on to the interactive map and checking out High Mountain located in the Santa Lucia Mountains east of Lopez Lake. According to the county's app, the High Mountain trail is 1.1 miles with a moderate difficulty level, and visitors will share the road with bikers and horseback riders.

The trail is perfect for cool and sunny days, as it begins in dense woodland that quickly opens up to green and lush landscape with panoramic views.

Doug Carscaden, aka Ranger Doug, is the ranger service supervisor for the city of SLO Parks and Recreation Department. He said that of the 4,000 acres of land that the department takes care of, 57 miles of it is allocated to trails and roads that are open for public use.

To get the community out onto the more remote locations, Ranger Doug said, the department created the #pixonpeaks challenge and social media accounts on Facebook, Instagram, and Twitter in 2015. Pixonpeaks accounts are updated with photos taken by community members, and the platform is also used to communicate hiking challenges throughout the year as well as updates on trail closures.

He said the program has been successful to this day and is still introducing hiking enthusiasts to new locations, such as the Irish Hills or Islay Hill.

Islay Hill is a modest 776-foot summit that lasts about 1.8 miles, and the trailhead begins in a residential cul-de-sac. The main attraction, aside from its stunning views of the southeast side of the city and Edna Valley, is Moo with a View—a cow statue that's standing on a post looking off into the distance through a pair of binoculars.

Moo with a View was part of CowParade, which took place in September 2016 through May 2017 featuring life-sized cow works of art showcased throughout the city. The project raised funds for local charities.

Unfortunately, Moo with a View was vandalized, but she's since been restored through GoFundMe donations and was planned to reassume her rightful perch on Feb. 13.

As the number of trail visitors increase, Ranger Doug said he wants to remind the community to keep the positive vibes flowing on their visit by taking care of the space they're visiting—that includes not leaving any trash behind and throwing away their dog-waste bags. 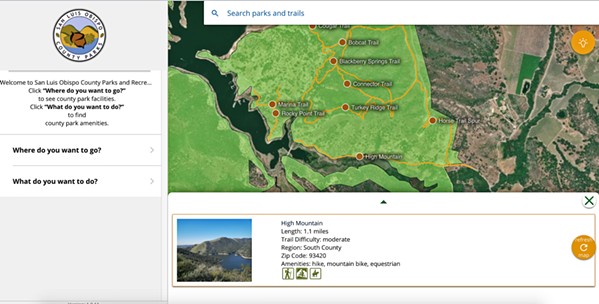 In the northern region of the county, the city of Atascadero has also seen a significant increase in visitors at the Three Bridges, Stadium Park, and Atascadero Lake trails, according to Deputy City Manager Terrie Banish.

"There has been more trail activity in general as families and all ages are getting outside during the pandemic's stay-at-home order. During the pandemic, we had the arrival of the Monolith at Stadium Park that has significantly increased trail activity, as well as more trout being restocked in Atascadero Lake Park by the Department of Fish and Wildlife," Banish said.

The Atascadero Land Preservation Society, an all-volunteer organization, owns and maintains the 103-acre Three Bridges Preserve. It also owns the 5 acres at the entrance to Stadium Park known as Stadium Lane, which includes the information kiosk, the Bill Shepard Native Plant Garden, and the Atascadero Land Preservation Society and Marj Mackey trails.

Mike Orvis, the president of the preservation society, said he queried some people who use the Three Bridges Oak Preserve often, and the consensus is that the use has increased about 20 to 40 percent overall since the beginning of the pandemic.

"Less in the early mornings, more in the late mornings and afternoons. In the early days of COVID, we definitely noticed an increase in the number of users, many of them were first-time visitors to the Three Bridges Oak Preserve and new to hiking," Orvis said.

To keep returning and new visitors safe during the pandemic, the society placed signs at trailhead entrances reminding users to social distance by keeping 6 feet minimum apart from others and to move off the trail to let others pass.

"We also have one-way trail routing in the lower loop, the Oak Woodland Loop trail. It has been our experience that almost all users are respecting the one-way routing," he said. "The one-way routing also minimizes the interaction between dogs."

The society has observed the trail itself has been wearing down faster due to increased use, and the volunteers mitigate the wear by performing regular trail maintenance.

Orvis said the society has also seen more vandalism, such as native plants being ripped from the ground, trailside barriers/logs being moved, damage to rock outcroppings, the building of unsightly rock cairns, and carving on native trees.

"We have also found more areas where users have short-cut the trails and gone off trail to go to the bathroom," he said. "We believe these items reflect some users are new to hiking and maybe are not as knowledgeable or prepared as experienced hikers. We believe in good time they come better prepared and will learn good hiking and trail etiquette." Δ