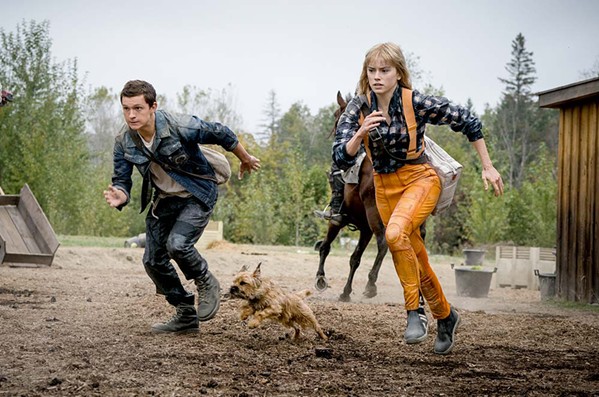 Doug Liman (The Bourne Identity, Edge of Tomorrow) directs this sci-fi action film based on Patrick Ness' 2008 young adult novel The Knife of Never Letting Go. It's 2267, and colonists on a planet dubbed New World eek out an agrarian existence in a place inhabited by The Spackle, humanoid natives who purportedly killed all the female colonists in a bitter war. All the men—not any women—are afflicted with a condition called "Noise," in which all their thoughts are available for anyone to hear.

Our protagonist, Todd (Tom Holland), is a young colonist who discovers Viola (Daisy Ridley), who dropped to the surface via spacecraft as part of an exploratory crew to assess the planet before a second wave of colonists arrives, unaware of the Noise and dead women. Soon the leader of Todd's town, Mayor Prentiss (Mads Mikkelsen), is after the girl, so she and Todd make their escape for another town and the hope of contacting Viola's mother ship to warn them.

It's an interesting premise, and the acting is solid, with a cast that also includes David Oyelowo, Demián Birchir, and Cynthia Erivo. It's also teed-up for sequels. There are three books in the series. This was streaming earlier for $19.99, but I didn't pull the trigger. After renting it for $1.96 from Redbox, I made the right decision. It's OK but not 20 bucks OK. (109 min.) Δ