March 02, 2006
comment
On July 7, when the Tri-W site was still a field of long grass and scattered eucalyptus trees, hundreds of Los Ososans gathered for a ceremonial sewer groun-breaking. A wooden podium draped with red, white, and blue bunting, and twenty gold shovels sat waiting for the triumphant event.Â 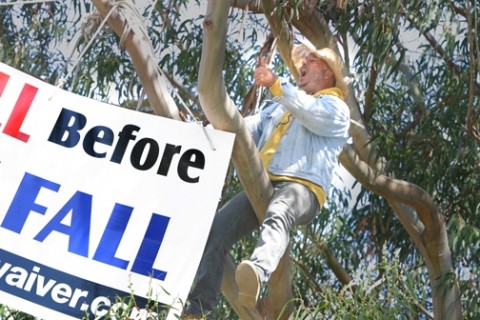 #Opposing residents gathered in vitriolic opposition and staunch support for the sewer, and the town was thick with tension. The loudest voice of opposition came from a nearby eucalyptus tree. It was Joey Racano, a long-time activist, equipped with a straw hat and a giant bannerÂ  reading, â€œRecall before tree fall,â€? had climbed the towering eucalyptus overlooking the crowd. From his tree-top perch, straddling a long branch, Racano loudly, and almost hauntingly, exercised the First Amendment.

Â Then the deputies showed up. They told him to come down, cuffed him, and took him to county jail. Seems the tree was on private land and the CSD, he says, had ordered his arrest for trespassing.

Â But now, six months later, the charges have been dropped. A new CSD board sits in Los Osos (they asked that the charges be dropped, to no avail) and new information has been noted by the district attorney â€” that the eucalyptus tree Racano climbed that day was in fact on public land, and he was not trespassing â€” so the charges were dropped.

Â â€œIf I was in that tree with a sign that said, â€˜Build It Now,â€™ I would never have been arrested,â€? says Racano, fresh from court on March 1. â€œThis is a big victory for free speech.â€?

Â Racano says this is the beginning. â€œIt started today,â€? he says. â€œThe battle has just begun.â€? He thinks the county and the Sheriffâ€™s Department are now liable for selectively arresting him and false imprisonment, and heâ€™s vowed to fight back.